Our first real in-depth look at the Washington Redskins this week as the Giants prepare to play them on Sunday.

Well, some larger than life personality has taken D.C. by storm.

Can the Giants stay sharp and focus and take care of the Redskins, something they couldn't do either time last year?

Let's take a look at how the team's stack up.

The Redskins have been a very impressive offense (they have played the Saints, Rams, Bengals, Buccaneers, Falcons, Vikings). They can really run the football, and they like to run a lot.

An interesting stat here is that doesn't quite explain how impressive it is, is that the New York Giants lead the league in fewest sacks allowed despite not having a bye yet. That means that the Giants have allowed less sacks than a few other teams in the league who have played less games.

Despite the growing reputation of Robert Griffin III as a dynamic passer, the Redskins' passing game, statistically speaking, is very controlled. RGIII is 31st in the league in passing attempts per game. This is a ball control offense.

Here's a stat that's scary for Redskins' fans, RGIII has been sacked 12 times already this season, and has rushed 55 times! Even if he got hit on only half of those attempts and did not get hit on any other pass other than the sacks he's taken -- fans have likely seen RGIII hit a minimum of 30 times this year through six games.

Griffin has 1,343 yards passing, 5 TD and 2 INT, while completing 70.5 percent of his passes. If I can get to a Beyond the Box Score this week I'll check it out for sure, but from what little I've watched of the Redskins this year a lot of that comes off short passes, screens, check-downs etc. I'll look at that to be sure, though.

Alfred Morris has rushed for 538 yards at 4.6 yards per attempt with 5 touchdowns.

No one else has even more than 10 carries. It looks like Morris is the man at running back.

Fred Davis leads the team with 23 receptions, Santana Moss, Leonard Hankerson, and Josh Morgan all have 16. Pierre Garcon has 8 in three games played. 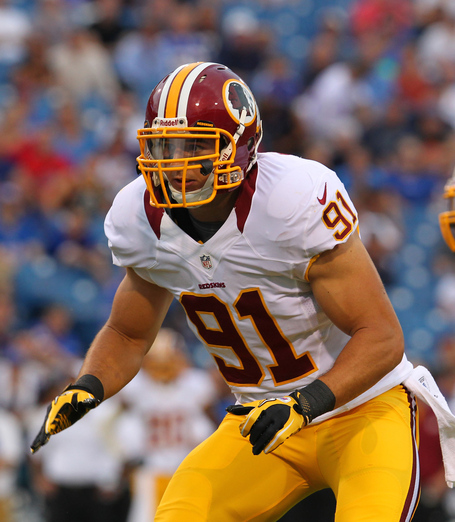 Ryan Kerrigan of the Washington Redskins [US PRESSWIRE]

Start your Giants' wide receivers in Fantasy Football because the Redskins cannot stop the pass. Washington's average of 328 yards per game surrendered via the pass is terrible. Just for reference if a quarterback threw for 328 yards per game he would pass for 5,248 yards in a season.

The Redskins are also giving up a lot of points, but they can get after the quarerback a little bit -- they are about at the league average.

The Redskins are not giving up a lot of yards per rush, but that might not mean anything to these Giants. The Buccaneers are first and the 49ers are 6sixth. Andre Brown gained 5.5 yards per rush against Tampa and Bradshaw just went over 100 yards against the 49ers.

The high turnover differential for the Redskins is because they are doing a good job of creating turnovers with five forced fumbles and eight interceptions, top 10 in both categories.

Cornerback DeAngelo Hall leads the team in tackles. That's a bad, bad sign. Safety Madeiu Williams is second in the league in tackles. Unless Madieu Williams is a spelling variation for Troy Polamalu that's also not a great sign.

Kerrigan leads the team in sacks with 3.5 and also has an interception returned for a touchdown on a wide receiver screen again this year.

To the surprise of no one, Billy Cundiff was not a good kicker with the Redskins and was released. The Redskins signed a rookie kicker out of UCLA, Kai Forbath. Forbath was well-regarded coming out of college, though he was coming off a disappointing season (for him). He has an accurate leg, but didn't have a great reputation as a guy who can boot it out of the end zone so we'll see if there are some return opportunities for David Wilson this weekend.

Punter Sav Rocca is an experienced veteran, but has had two punts blocked this year already. There might be an opportunity there for the Giants on Sunday.

The Redskins return man is Brandon Banks. Jimmy Kempski over at bloggingthebeast likes to highlight how often Banks fumbles, and doesn't think his reputation matches his production as a return man either, but he is dangerous. Banks is averaging 26.3 yards on kickoff returns and only 5.4 yards on punt returns this season.

Stay here with Big Blue throughout the week as we'll have plenty more about this match-up.