The New York Giants (2-2) host the Cleveland Browns (0-4) at MetLife Stadium Sunday at 1 p.m. ET. Here is everything you could ever want to know about the game, and probably a whole lot more.

Here are three key players for each team in Sunday's game.

1. Eli Manning -- If we are going to list key players every week we might as well just give Manning a permanent slot. He is the most important Giant, and pretty much always will be.

2. Jason Pierre-Paul -- JPP just wants to have fun. Lining up against Cleveland's three-time All-Pro left tackle Joe Thomas can't be much fun, though. Expect Pierre-Paul to be on the left side lined up against Mitchell Schwartz with Justin Tuck inside quite a bit, especially with Rocky Bernard not playing today.

3. Stevie Brown -- Surprised by this choice? Brown played very well last week in relief of the injured Kenny Phillips, and will get the start this week with KP sidelined by his MCL injury. Jesse Bartolis tells us that Brandon Weeden and the Browns like to try for the home run down the middle of the field, so Brown will be tested.

1. Brandon Weeden -- Weeden is a 28-year-old rookie learning to play quarterback in the NFL. He has awful numbers thus far, but by all indications has played better than that. We'll see if he can take advantage of the injury-ravaged Giants' secondary.

2. Trent Richardson -- The rookie running back believes the Giants are vulnerable after what LeSean McCoy of the Philadelphia Eagles did to them last week, gaining 123 yards. The Giants need to prove to the young man that was an aberration -- if that's what it was.

3. D'Qwell Jackson -- D'Qwell is swell as the Browns' middle linebacker. He is second on the Browns with 26 tackles. He also has a team-leading three sacks to go along with a pair of interceptions. He is the kind of middle linebacker the Giants would love to have.

Giants vs. Browns: What to watch for

Beyond the Box Score: An in-depth look at the Cleveland Browns 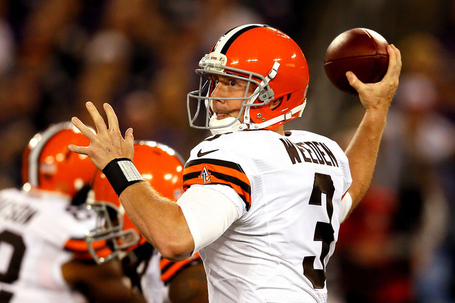 Here is a look at what various highly trust-worthy prognosticators from around SB Nation say about the game.

[The buildup: Giants-Browns posts from the past week]

Giants' video of the week

In case you missed it, Giants' safety Antrel Rolle dropped by the SB Nation studio in New York City during the week to chat with Matt Ufford. It's a great interview. There is only one issue. Yours truly isn't in it! Hey Matt, why wasn't I invited? Regardless, still great stuff.

"I can be a better player than what I'm playing now. I'm not used to playing like this. I can be a much better player and I just get need to get hungry and get after it. ... I feel like I haven't been having fun lately. It feels like I'm kind of stressed a little, but I made an oath to myself that I'm just going to go out there and have fun."

"I get that there are no moral victories when you look at the win-loss column. With that said, the fact that the Browns have been within a field goal of four pretty decent teams (Philadelphia, Cincinnati, Buffalo, and Baltimore) heading into the fourth quarter of games is encouraging. I would rather see the Browns be competitive and on the cusp of winning than see them just look downright pathetic in several losses (i.e. Tennessee, Jacksonville, Oakland, Kansas City). There is a reason to be optimistic, though. It's not like Cleveland have a veteran team that is underachieving; they have the youngest team in the league, with potential stars like Brandon Weeden and Trent Richardson who are hungry to make an impact each and every week. The Browns won't turn things around to make any form of a playoff run, but they will be the best losing-record team in the league by the end of the season."