Let's look at some of the things we learned about the Giants on Sunday.

EAST RUTHERFORD, N.J. -- The New York Giants are in first place in the NFC East after a come-from-behind 30-27 victory over the San Francisco 49ers on Sunday night. This is the kind of game, against an opponent they were supposed to beat, that the Giants had to win if they are going to contend for an NFC East title. Let's look at 10 things we learned Sunday night.

The NFC East is there for the Giants

The Dallas Cowboys are 2-3 and have lost three games after being blown out Sunday by the New England Patriots,  30-6. Not coincidentally, those three losses are all of the games they have played without injured quarterback Tony Romo.

The Philadelphia Eagles are 2-3 after finding their offense Sunday in a 39-17 thrashing of the New Orleans Saints. Were the Eagles good, or are the 1-4 Saints that bad. You can bet the Eagles will talk a good game heading into next Monday against the Giants. Can they back it up?

The Washington Redskins are 2-3 after a disappointing 25-19 loss to the Atlanta Falcons. Kirk Cousins threw a game-losing pick six in overtime for Washington. Can you really take the Redskins seriously as long as Cousins is there QB?

One-third of the way through the season, and with games the next two weeks against the Eagles and Cowboys, the opportunity is there for the Giants to take control of the NFC East. All they have to do is capitalize on it.

After the Eagles and Cowboys, the Giants travel to face the 1-4 Saints and 2-3 Buccaneers. They don't face a team that currently has a winning record until Week 10, when they host the Patriots. 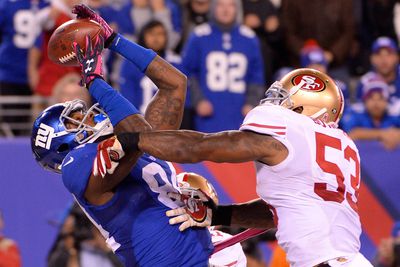 Some people are idiots

On the Giants' opening drive of the third quarter a fan in a 49ers jersey ran into the field. He was tackled by several security guards and carried off the field still fighting with about 8-10 MetLife Stadium security guards. Let's hope the drunken jerk enjoys his night in a New Jersey jail.

Last man standing? As long as it's Eli

Balance? Fugeddaboudit! In a fight with a 49ers team that wouldn't go away on Sunday night, the Giants put the game in Eli Manning's hands. No Odell Beckham or Rueben Randle down the stretch? No big deal. Manning set a franchise record with his 41 completions, and had a career-high in pass attempts with 54. He threw for 441 yards, and completed passes to eight different receivers.

Manning had the bone-headed interception right before the half, but with an under-manned defense and a receiving corps that seemed to get thinner and thinner as the game went along, the Giants needed Manning to step up Sunday and he did. He completed 15 straight passes at one point in the second half.

"You know, the good thing about this team is that when we were in the huddle, we have a great quarterback, a great leader in Eli. He was calm, he was collected. He let us know what we needed to do, what we needed to get to. You can follow easily behind a leader like that," said running back Shane Vereen. "It says that, you know, we've got a better quarterback than a lot of people think but we love him, we trust him, we follow him, he's our leader. We shouldn't expect anything less."

Manning was asked if this was the best regular season game he had ever played.

"I don't know. It felt like we were in a good rhythm all day, the ball was coming out quick, we were seeing things well and guys were making some plays for us, so it was fun. It was one of those days where you just felt good throwing it, things were happening well, we were seeing things, we were picking things up and Coach McAdoo called a great game -- it was aggressive, we were going after it, we were pushing the ball down the field, we were getting completions and the offensive line did a great job protecting, so I thought it was a great offensive effort and I thought we had great rhythm all game," Manning said.

Bad Eli can still rise up

Even on a record-setting night during a season in which he has been incredibly careful with the Ball, Bad Eli is always lurking. It hasn't happened often this season when he's been throwing, but Bad Eli showed up at an awful time Sunday night. With 11 seconds left in the first half Manning made an absolutely inexplicable decision, and a worse throw, tossing a pass toward a covered Odell Beckham in the end zone. The pass was picked off by Tramaine Brock. Thus, the Giants went to the locker room leading only 13-6 when it should have been 16-16. Doesn't sound like a lot, but it took the air out of the stadium and gave San Francisco hope entering the second half.

"Just a bad throw. I got rushed out of the pocket a little bit and I thought I could still get out there, hadn't really had a double move on the outside and Odell must've been a little quicker than I thought so I was a little late probably on the throw trying to get it in there before it went out of bounds and just underthrew it. It was a bad decision, got to throw it away a lot quicker," Manning said.

Head coach Tom Coughlin did not second-guess the decision to call a pass play there.

"Obviously, the play before the half didn't help any -- we drove the length of the field and didn't come away with any points," Coughlin said. "But, I would do that again -- 11 seconds on the clock -- I would do it again. You know, throw it in the end zone; you throw it away."

TC: "You gotta take the points"

Manning threw 54 passes Sunday night, but on third-and-seven from the 49ers' 11-yard line with 5:14 to play the Giants went with a draw play to Shene Vereen. He came up a yard short of the first down and Coughlin said he never considered going for the first down there.

"You gotta take the points," Coughlin said."What are you going to do? You're not going to come away empty-handed."

A chance to win has magical healing powers

Odell Beckham left Sunday's game after feeling "a little tug" on his hamstring during the third quarter. With 30 seconds left in the game Beckham reappeared, playing one snap and drawing a pass interfence penalty on Kenneth Acker that set up the game-winning score.

Was Coughlin reluctant to put Beckham back in the game?

Giants are a scrappy bunch

What are the 2015 New York Giants? Maybe they are the Little Engine That Could. They played without linebackers Devon Kennard and Jonathan Casillas and defensive ends George Selvie and Robert Ayers. They lost middle linebacker Jon Beason to a concussion on the first defensive series. They went into the final drive with Geremy Davis, Myles White and Dwayne Harris as the wide receivers. They still won the football game.

"They're resilient, they're tough, they're tough-minded," Coughlin said. "They define themselves as scrappy, a scrappy bunch. They are that.

"I told them in the locker room it took every guy tonight. Every guy in order to secure the win. People were playing and getting pushed into roles they hadn't been in before. That's a real sign of a team."

Manning threw the ball 54 times. He dropped back 55 times, scrambling once for 11 yards and taking a vicious hit when he couldn't get down. Manning was never sacked, a combination of excellent work from the offensive line, getting the ball out quickly at times and moving efficiently in the pocket to find throwing lanes.

Stony Brook is on the NFL map

The Giants have needed a pass rush, and have been waiting for production from third-year defensive end Damontre Moore. Like it or not, Moore's role is to be a pas-rushing specialist. Sunday, he had two sacks, a forced fumble and a quarterback hit. The Giants need more of that from the third-year pro.