Rysen John’s tall order: Can he jump from D2 to NFL, and switch positions?

Share All sharing options for: Rysen John’s tall order: Can he jump from D2 to NFL, and switch positions?

Rysen John isn’t much of a negotiator, and that turns out to have worked to the benefit of the New York Giants.

“I think it was like five minutes after the draft, after the seventh round that Roger Goodell closed off the draft, I think it had to be within five minutes or so I got the first call from an NFL team and it happened to be the Giants calling,” John said recently by phone.

“I kinda just took the first offer on the table. I just took it. Just ran with it. Signed it right there. … it was a cool moment.”

That offer was for the 6-foot-7, 237-pound Vancouver, British Columbia native who played collegiately at Division II Simon Fraser University in Canada to join the Giants as an undrafted free agent to compete for a roster spot at tight end.

The Canadian Football League, where John was selected in Round 3 by Calgary Stampeders, was always a backup plan. For now, at least, John won’t need it.

“I always had a dream, always had a plan of getting to this point now. Even coming out of high school if I ever had a chance,” John said. “Obviously playing Division 2 ball is a great opportunity to get playing time, but if I had more exposure to a D1 school or anywhere else maybe I could have been higher on someone’s list.

“Being in the NFL now, jumping from Division II to the NFL it does feel like a pretty big jump and still surreal at this moment.”

Now the question becomes whether or not John, a Division 2 wide receiver, can both learn the nuances of a new position and rise to the level of competition he will face in the NFL.

“Personally I’m biased of course but yes I believe he definitely has what it takes,” Simon Fraser interim head coach Mike Rigell told me during a recent phone conversation. “With that being said he definitely is an athletic specimen when you’re talking about the size, the height, all those kind of intangibles that he has that are just God-given.

“There’s going to obviously be a learning curve with the speed of course, and the size and the physicality of the guys in the NFL.”

Rigell was the wide receivers coach at Simon Fraser the past two seasons.

“When I got him he was really raw. You could see the talent. He just hadn’t been exposed to looking at defenses and understanding the why of why defenses are doing what they’re doing and their disguises and those kinds of things,” Rigell said.

“I just knew I had this big 6-foot-7 monster that was full of talent but didn’t have any technique, didn’t understand awareness, and was still kind of coming into his body.”

That monster drew the attention of NFL scouts this past season despite playing for a horrid Division 2 team. Simon Fraser, the only school in Canada playing football against NCAA competition, went 1-9. The Clan lost two games by more than 60 points and got outscored 481-130 on the season. 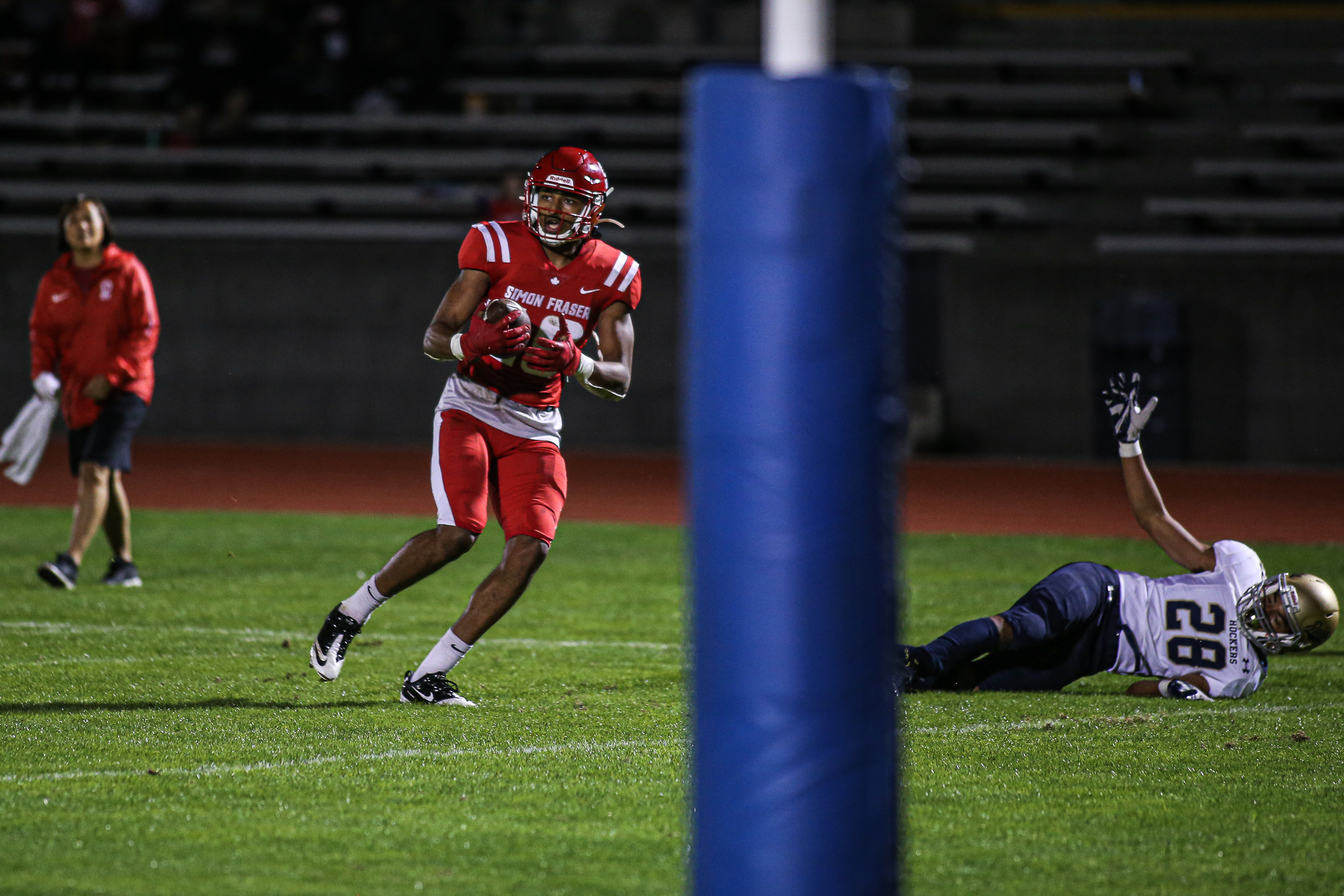 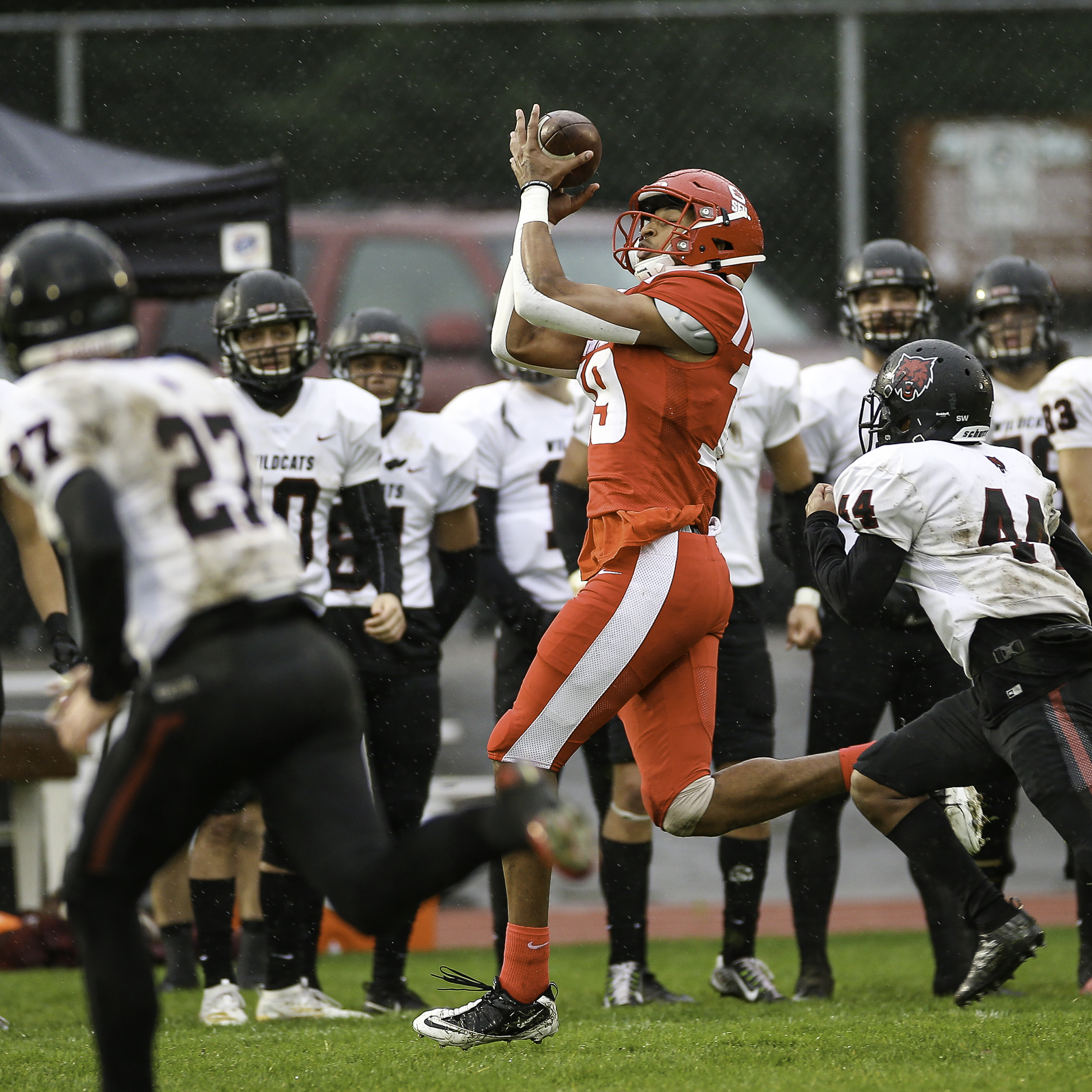 If you have the talent, NFL scouts will find you anywhere. Even at a Division 2 school in Canada that went 2-37 in John’s four seasons playing there. Scouts from at least a half-dozen NFL teams were eyeballing John despite Simon Fraser’s difficulties, and he earned an invitation to the Hula Bowl, an All-Star showcase held in Hawaii.

Before the draft, John did a virtual Pro Day where he was timed at 4.6 in the 40-yard dash, did 13 bench press reps, had a 32.5-inch vertical jump, and a wingspan of nearly seven feet. The 40 time, if accurate, would have put him around the 88th percentile of tight ends tested at the Combine since 1999. The vertical jump would have been around the 43rd percentile.

John was a wideout for Simon Fraser, simply using his size and superior athleticism to overmatch opponents. In the NFL he will be a tight end newbie going up against better athletes than he has ever faced and will have to do things like block and line up inline in a three-point stance he has never had to do before.

“It’s going to be a little bit different playing tight end, but I’m willing to do it, willing to play that position.”

The Giants appear well-stocked at tight end for the 2020 season. They have Evan Engram, Kaden Smith, and Levine Toilolo as their top three tight ends. Garrett Dickerson, Eric Tomlinson, and Kyle Markway will battle for a fourth spot or practice squad berth. John should have time to earn the position and get strong enough to have a chance to be an adequate blocker.

Rigell said the switch to tight end is a “good situation” for John.

“I think that’s going to be a good adjustment for him just because he won’t have to worry about the bump and run, the press techniques, those kinds of things,” Rigell said.

“We’ve put him in the slot and moved him around, so he understands running routes in the middle of the field. He’s dealt with dealing with linebackers and understanding safeties. Obviously, it’s more complex with the NFL defenses and how they roll and move and what they’re doing in their disguises. It’s going to be some adjustment but one thing Rysen will do is he always comes and he works hard and he has thick skin.”

Rigell believes patience with John might pay long-range dividends for the Giants.

“If he can make a practice squad that is a blessing in and of itself right now. That’s what I’ve told him. There’s a lot of things obviously coming from the D2 level he needs to learn. That’s not a knock on him. He is really raw,” Rigell said. “The ceiling can go as high as he wants it to go with his work ethic and him getting some good mentorship and really watching and learning from those guys, learning how the professionals do it.

“Two or three years down the road, hopefully, the Giants can be patient with him, he’ll be fine. He’ll put some more weight on … he runs well enough, he’s going to continue to get stronger and faster. It’s just going to come down to patience and him being in the best fit where he doesn’t have to get thrown in the fire.”