Daniel Jones or Dwayne Haskins? Which QB landed in the better spot for long-term success?

We asked BBV staffers to weigh in on that question

Share All sharing options for: Daniel Jones or Dwayne Haskins? Which QB landed in the better spot for long-term success?

Daniel Jones with the New York Giants or Dwayne Haskins with the Washington Redskins? Which rookie quarterback landed in the spot that gives him the better chance for long-term success in the NFL?

That’s the question I put to our Big Blue View contributors for a “round table” discussion. The answers are an interesting mixed bag. Here they are:

This pains me to say, but Washington has a better environment for a young quarterback than the Giants are.

Up front, Washington has a better and younger offensive line, while the only sure-fire long-term piece the Giants have is Will Hernandez while three of their five projected starters are on the wrong side of 30. On the defensive side of the ball, Washington already had one of the best defensive lines in football and have only added to it with Montez Sweat, not to mention adding Landon Collins and the somehow-still-in-the-league Reuben Foster.

On top of that, Washington has already begun building around Haskins at the skill positions by selecting Terry McLaurin, a playmaker with whom Haskins already has a rapport and chemistry. And while Giants fans might hang on to Saquon Barkley as a difference maker, Washington will be getting Derrius Guice back from injury, and there was a significant contingent which saw him as an equal to Barkley coming out of college.

I am a big fan of Sterling Shepard and love the move to sign him long before he can hit free agency, but he will still have to prove that he can be a viable WR1 in the NFL and thrive both inside and outside as the team’s primary receiving option. Golden Tate will have to prove that his 2018 season was an aberration and he is still a threat with the ball in his hands, and can coexist with both Shepard and Evan Engram.

Looking down the road, the Giants will have to continue to replace parts on their offensive line as they age out of the league, which they will do so sooner than their counterparts down I-95. And by the time the Giants have to contemplate picking up Daniel Jones’ fifth year option, which will likely be somewhere around $30 million (because he was a top-10 pick) they will also be looking at paying Saquon Barkley a contract on the order of $20 million per year (if not more) for his second contract. Having to devote roughly a quarter of your salary cap to two players while having to rebuild an offensive line is going to put the team in a bind and make it a challenge to continue to build around Daniel Jones.

My immediate response would be Haskins by virtue of being the better quarterback prospect. To me, that’s a fairly significant step in being set up for long-term success.

But if the spirit of the question is who was put in the surrounding situation that would best benefit a quarterback outside of his control, then I would lean Jones but with a smaller gap than what I believe separates their talent level.

Even without Odell Beckham Jr., the Giants should have the edge at receiver, though admittedly with three draft crushes in Josh Doctson, Paul Richardson, and Terry McLaurin, there probably won’t be anyone higher than me on Washington’s top trio, even though it’s still probably a bottom-third unit in the league. The Giants should also have the edge at tight end, though even at age-35, Vernon Davis is one of the better TE2’s in the league — and a serviceable enough TE1 when Jordan Reed inevitably gets injured.

As great as Saquon Barkley is, there’s not a huge advantage over a healthy Chris Thompson and Derrius Guice along with a sometimes still useful Adrian Peterson and a lottery ticket in Bryce Love. I’d give the offensive line advantage to Washington with Trent Williams and Brandon Scherff counting for most of that.

Jay Gruden has a longer track record of making his scheme quarterback friendly, but long-term, who knows how much longer he’s likely to be around. That brings us to franchise stability, which whatever you think of the Giants right now, you wouldn’t wish Washington’s organizational structure on anyone.

So that leads back to the answer Jones is in the preferred situation, but it’s not enough to make him more likely to be the better quarterback long-term.

I’m going to think outside of the box here because I believe the question of which quarterback is better positioned to have long-term success isn’t the angle we should be looking at.

To me, I think Daniel Jones and edge Josh Allen, the latter of whom was drafted one pick after ones, are the two rookies that will forever be intertwined. How many times have Giants fans and media members for that matter lamented what might have been had the Giants not picked Ereck Flowers over Todd Gurley, chosen one pick later?

Quite a few as I recall, which is why I think it makes more sense to take that angle, especially since when the Giants were on the clock at No. 6, the widespread opinion was they were going to go with Allen.

With all that said, if I’m answering the original question straight up, I go with Jones.

No disrespect to Case Keenum as a potential mentor to Haskins, but he hasn’t really experienced adversity the way Manning has of late. That leaves me to question how much he’s going to be able to share with Haskins, who also didn’t experience much in the way of adversity in his one year as a starter at Ohio State. 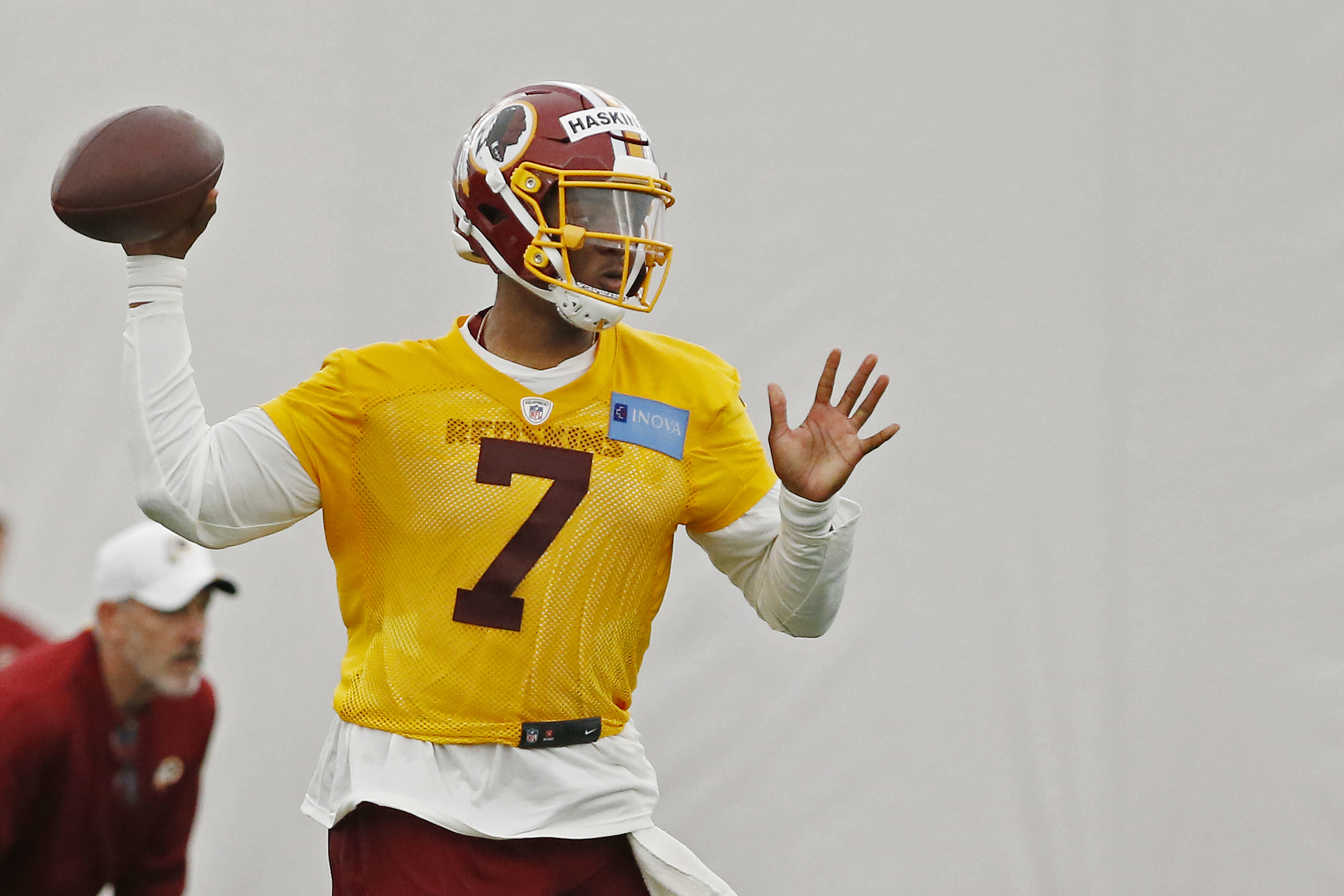 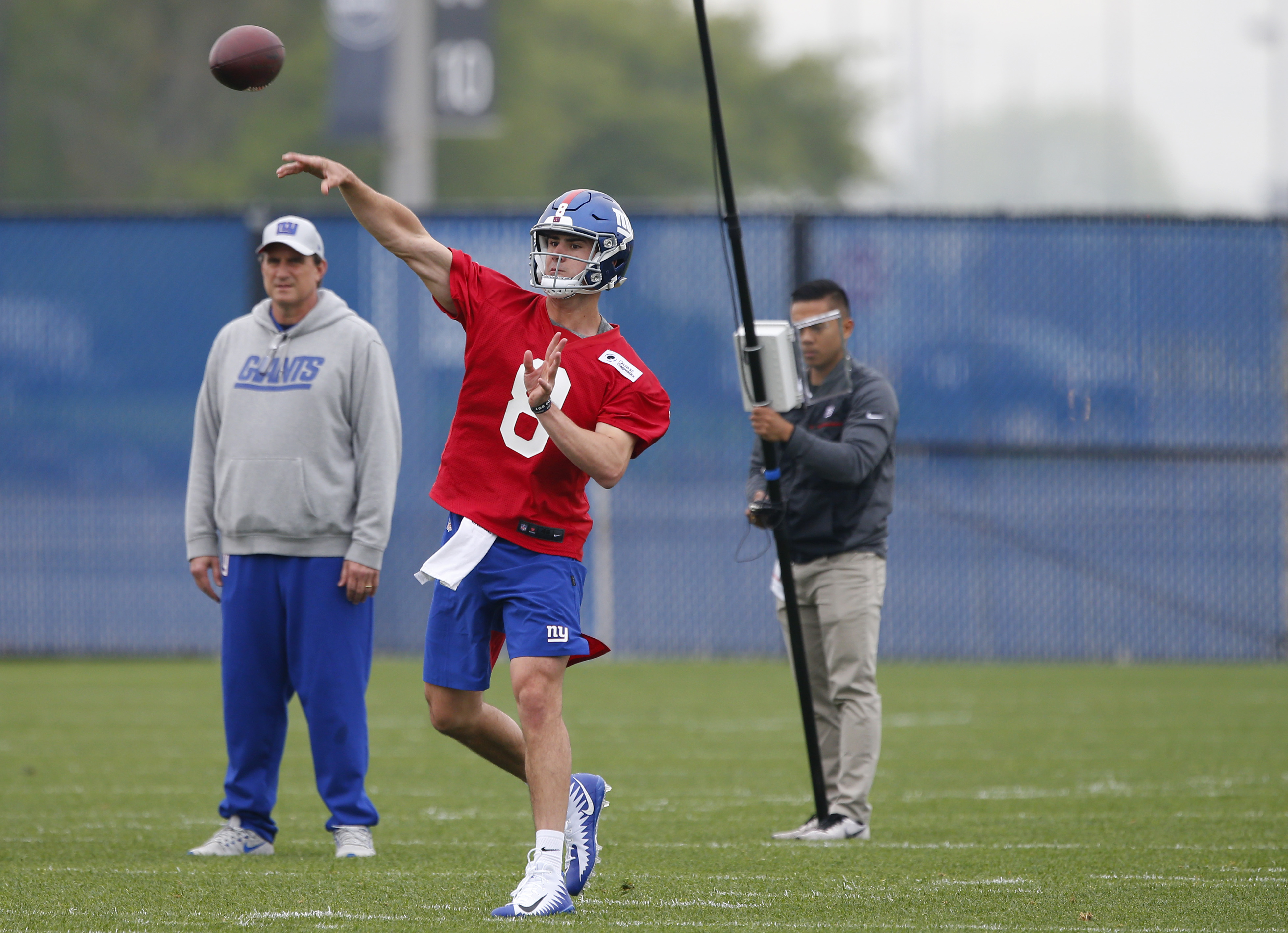 Which QB is in the better position for long-term success, Jones or Haskins?

This is a tough one for me for the simple reasons that I believe Haskins is clearly the superior prospect of the two, but also the fact that of all 32 organizations in the NFL, Washington is near the bottom of my list in terms of teams I trust most.

Organizational dysfunction isn’t exactly ideal for quarterback growth and development. I have stated many times that Jones has fallen into an excellent landing spot, at least from a coaching, mentoring and supporting cast perspective.

On the field, the Redskins are still a premium pass catcher or two short, but for the most part, it looks like Haskins should be protected with an offensive line and power running game while he develops. In the end, I will side with the better prospect/talent. Give me Haskins.

Let’s start with two simple propositions. First, in terms of my evaluations and grading, Dwayne Haskins was ranked higher than Daniel Jones. Second, Dave Gettleman - with access to much more information than was available to me - disagreed.

But the time for harping on evaluations is over, and Jones is now a New York Giant. So the issue of whether the organization has set him up to succeed is the right framing of the discussion. Of course, Haskins and Jones will forever be linked, given that both players were available for Gettleman and now they will be squaring off for the foreseeable future as NFC East rivals.

Looking at the coaching staffs, both Pat Shurmur and Jay Gruden have shown glimpses of an ability to get good play out of quarterbacks, with Shurmur guiding Keenum a few years ago and Gruden’s job with Kirk Cousins.

The surrounding picture, however, brings the issue into more focus. The Giants seem to have solidified their offensive line over the past two offseasons, and they still have some interesting weapons in place around the quarterback. With players like Golden Tate and Sterling Shepard, it seems the Giants are moving in a direction of a more traditional West Coast offense, one that would be ideal for what Jones brings to the table. Of course, two more talented young players in Evan Engram and Saquon Barkley add more potential to this offense.

In Washington, the offensive line is talented but often injured. The same could be said at the tight end position, and some of the receivers are questions marks. They might be relying on Terry McLaurin, a third-round rookie, more than one would expect.

Then there is the fact that given the rest of Washington’s quarterback room, Haskins might be seeing the field sooner rather than later. Some quarterbacks can handle that type of baptism by fire, some might not. Jones, by contrast, is expected to ease into the position.

So, while Haskins looks to me the more talented prospect, Jones, with everything the Giants have in place, might be in the better position to succeed.

Let’s be real here for a minute — neither of these organizations has been the picture of stability or sound decision making for the last half-dozen or so years. That, at least partially, is how Jones and Haskins wound up with the Giants and Redskins respectively in the first place.

That said, I believe Jones is in a better position than Haskins to be set up for long-term success.

First, think about these two organizations. The Redskins are easily the one more likely to devolve into full-on New York Jets level craziness when it comes to front office in-fighting, power struggles and the like. From owner Dan Snyder on down they seem like a powder keg. The organization led by John Mara and Steve Tisch isn’t perfect, and too often moves at a glacial pace, but the Giants ship is a steadier one than Washington’s.

In Washington, coach Jay Gruden is in the final year of his contract and under immense pressure to win as the Redskins have reached the playoffs just once in his five-year tenure. That makes it difficult to show patience with the development of a young quarterback.

Haskins is likely to be asked to play early for Washington, if not right from Week 1. Not only that — he’s going to be tasked with leading a franchise and winning games to save his head coach’s job. That’s a big ask for a rookie quarterback — especially one with just a single year of college starting experience.

Jones has the luxury of not facing immediate expectations. He can learn from Eli Manning and, unless disaster strikes and Manning is injured, probably won’t be asked to play in 2019 until the Giants are out of the playoff race and learning, not winning, will be the primary objective.

Matt Williamson likes to say the Giants have built a comfortable “nest” for a young quarterback, and you can see why. Great running back to hand the ball or dump it off to. Veteran group of receivers and offensive linemen who should know what they are doing. A head coach who has had a history of working well with a variety of quarterbacks, and isn’t yet on the hot seat.

I can’t say which of these guys will end up having the better career. In my view, though, Jones has been dealt the better hand.