After an angry day and a difficult loss for the New York Giants to the Carolina Panthers, let’s hope things calm down a bit. Of course, we are about to embark on our traditional “Kudos & Wet Willies” game review. So, maybe not.

Saquon Barkley — His 129 yards from scrimmage (48 rushing, 81 receiving) made him only the third running back in NFL history to record 100+ yards from scrimmage in his first five games. Barkley had runs of 30 and 20 yards, and pretty much everything he got he did on his own. His effort on what could have/should have/would have been a game-winning touchdown was tremendous.

Jawill Davis — As much as we’ve been killing the Giants’ return men all season, let’s give credit where it’s due. Davis averaged 26.5 yards on two kickoff returns. He had a tremendous special teams tackle on a punt, backing Carolina up inside its 5-yard line the first time the Panthers had the ball. He had his first two NFL pass receptions. A nice day for the rookie undrafted free agent.

Pass blocking — Eli Manning was sacked once, but he was hit only two other times in 37 drop backs. For the second week in a row Manning had, by NFL standards, a good enough pocket to do what he needed to do without defenders in his face all day.

Pat Shurmur — I usually keep the coaches out of “Kudos & Wet Willies,” but I have to give Shurmur some props. I love the fire he showed on the sidelines Sunday, and that he stunningly brought to his post-game press conference. He dug deep into the playbook for the Beckham-to-Barkley trick play. He stuck with the run enough to give Barkley 15 carries and a chance to create some plays. In all honesty, it’s because of Shurmur that I think the Giants — even at 1-4 and off the controversial Beckham comments — won’t see their locker room fall apart the way it did a season ago no matter what happens on the field.

Run blocking — As good as the pass blocking was — and it was really good — the run blocking was atrocious. Barkley had runs of 30 and 20 yards, yet somehow ended up with only 48 total yards on 15 carries, an average of 3.2 yards per attempt. That means he “gained” -2 yards on his other 13 carries. Barkley lost yardage on six of those carries. Barkley is a wonderful player. Imagine how often we would get to watch him do “Barkley Things” if his blockers would give him some help.

Giants’ tackling — Up front, let’s except Eli Apple from this. Sticking your body in and forcing a 260-pound man to fumble when he is steamrolling right at you requires courage. And deserves credit. Let’s give that to Apple for forcing a Cam Newton fumble Sunday.

His defensive teammates? Not so much. Especially in the first half. I have no idea how many tackles the Giants missed overall, but it was way too many. Four players had a chance to bring down Curtis Samuel on this touchdown.

GET OFF ME
Curtis Samuel would not be denied
(via @thecheckdown)pic.twitter.com/s2Gsws4bEd

Carolina wide receiver D.J. Moore shockingly ran right through Landon Collins on a couple of occasions. Moore gained 18 yards on a first-quarter reverse where the Giants missed him in the backfield.

He also did some bad ones. He had a punt hit him when, functioning as the returner, he tried to throw a block on a Carolina defender and the ball banged off his leg. The Panthers recovered for a touchdown after a wild scramble. With the Giants at the Carolina 39-yard line, Beckham dropped a fourth-and-3 pass from Manning that took away a Giants’ scoring opportunity.

Should Beckham have caught the third-quarter pass from Manning that Carolina’s James Bradberry knocked away from him in the end zone? Bradberry made a brilliant, aggressive play to knock the ball out. Still, Beckham had two hands on the ball in the end zone. You could argue that the highest-paid receiver in the game needs to make that play. I did on Twitter, but I will also give credit to Bradberry and acknowledge the degree of difficulty. Everyone will see that differently. In the end, the Giants got 3 points when they came close to 7. 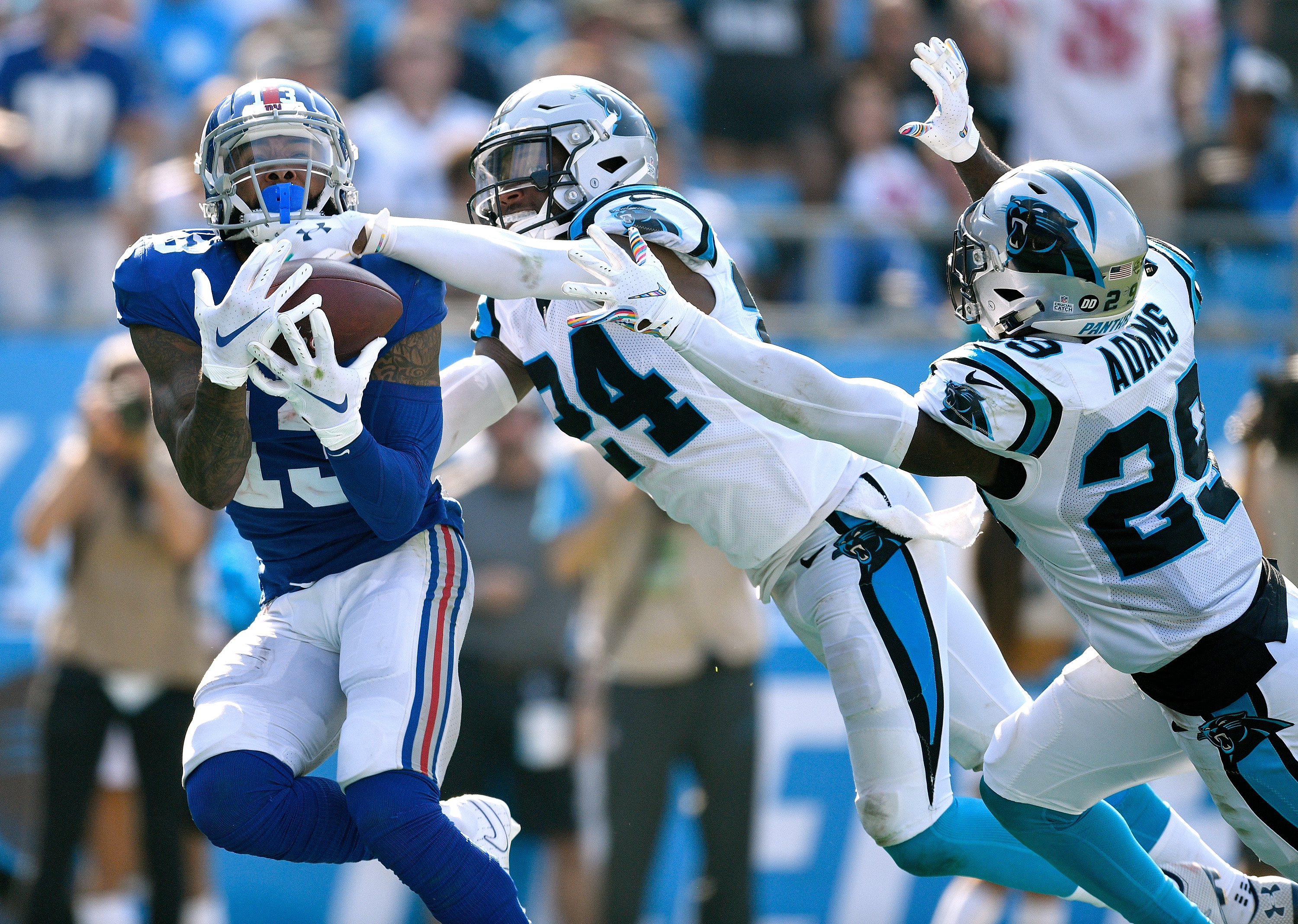 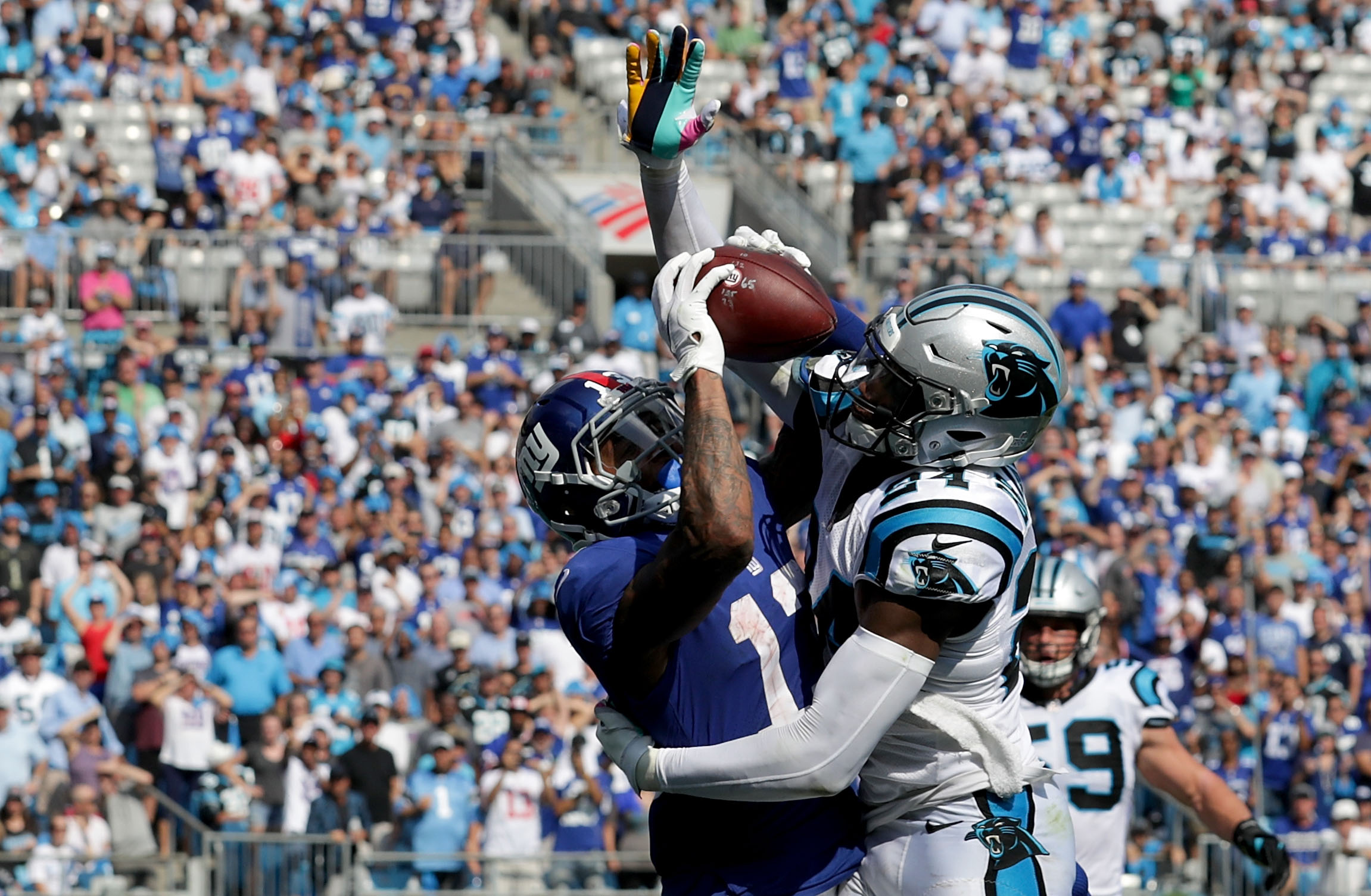 The touchdown catch Beckham made Sunday, and the one he couldn’t quite haul in.
Photo by Grant Halverson/Getty Images and Photo by Streeter Lecka/Getty Images

Eli Manning — With the Giants trailing 26-17 and their only touchdown having come from a Beckham-to-Barkley pass, Manning was headed for a “Wet Willie.” Then, some of the old fourth-quarter magic.

A 33-yard strike to Beckham that split defenders for a touchdown following a Janoris Jenkins interception and return set the Giants up at the Panthers’ 34-yard line. A 2-point conversion pass to Rhett Ellison made it 27-24.

Then, with no timeouts and 2:16 on the clock, a four-play. 75-yard drive that included a 40-yard strike to Russell Shepard and a 15-yard touchdown pass to Barkley that, to be honest, was more Barkley than Manning.

Still, these are the kinds of winning drive Manning used to engineer regularly.

In the end he threw two interceptions, one a bad throw over the middle and the other perhaps a miscommunication with Sterling Shepard. Still, he passed for 326 yards. He got the ball down the field. This was no “Checkdown Eli” game. He made big throws at the end when the Giants needed them. He got them the lead with 1:15 left in the game. The Giants just didn’t close the deal.