Earlier today I was engaged in a debate over the career trajectory and overall skill level of Ereck Flowers, the current Left Tackle for the New York Giants. I think it's safe to say that Mr. Flowers is the most polarizing player on the Giants roster, with perhaps the exception of a man whose last name rhymes with "Canning". Some fans believe that Flowers is a liability that is a bust at Left Tackle. These fans believe Flowers should be moved to another position on the Offensive Line (although some of the extremists may be suggesting that he replaces Jonathan Hankins if he's not retained this off season). Other fans believe that a lot is being asked of Ereck Flowers and that he's shown signs of growth, even though he's nowhere near reaching his full potential yet. I happen to fall into the latter category. 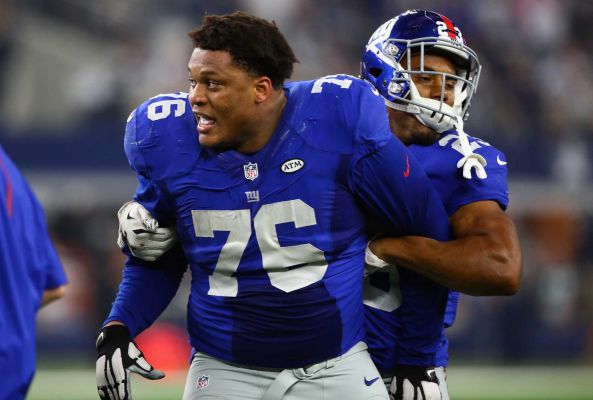 "Who said my PFF grades suck?!"

Now let me start out by saying this; I completely understand the frustration that some folks feel when watching Ereck Flowers. During games, I've cussed more than a few times in his general direction. But I'm a different person during games than I am during the rest of my existence, which is rather fortunate. When it comes to spouting off football opinions, I usually believe in the phrase "cooler heads prevail", which is why it's a damn good thing fans don't make football decisions for their teams.

As someone who played Left Tackle for a few years, I am fairly comfortable judging and evaluating talent at that position. I like watching good Left Tackle play, and it's why I begrudgingly enjoy watching our division rivals play. Tyron Smith, Trent Williams, and Jason Peters are all excellent Tackles. And that's where I'm going to start in my defense of Ereck Flowers. Look at the build of each one of those fellas and tell me that Ereck Flowers isn't built the exact same way. If I recall correctly, none of those guys immediately played Left Tackle coming into the NFL. Trent Williams is the only one I'm fuzzy on, but I can't remember if it was him or Jamaal Brown manning the left side for the Redskins. My point is, they all had the tools to be a Tackle, but they were eased into their respective systems and given immediate offensive help. As they developed, their tools allowed them to blossom into the players that they are today.

Offensive help is something that has been severely lacking when it comes to the first part of Ereck Flowers' career. In Ben McAdoo's offense, he's been immediately thrust into the starting Left Tackle role and asked to play on an island with some of the league's best pass rushers. Minimal Tight End and Running Back help has been shaded his way. In comparison, Jack Conklin, someone Flowers if oft compared to, received a tremendous amount of help from chips, double team blocks, slide protections, and various formations. Jack Conklin is looking like he'll be a great player, but a lot of his early success is due to the fantastic job by the Tennessee coaches who put him in a position to succeed and become confident early on. There's a wonderful article on SBnation by Geoff Schwartz breaking down the help Conklin has received. It's worth a read, trust me.

Sticking with the Tennessee/Conklin comparison, lets take a look at each offense a little more in depth.

Now lets break that down. We're looking at Tennessee, a team that passes much less (about three games worth), and runs much more (also roughly three games worth). Now if you ask me, that protects a Tackle just as much as chips, double teams, and slide protections. Ereck Flowers has not benefited from the luxury of A) Playing on the Right Side with competent help and B) Playing in a run oriented offense that limits his "island" snaps. By throwing more and running less, it exposes Flowers to more snaps where he has to be totally alone with pass rushers. Of course teams are going to get more sacks and pressures when we can't run the ball. So while Flowers play can be ugly at times, it's those plays that stand out in our minds as we shut out all of those island plays where he actually is successful and does his job.

And this isn't even mentioning the fact that Marcus Mariota is a much more mobile Quarterback than Eli. I do like Eli's pocket footwork, an underrated aspect of his game actually, but Mariota moves around so much that his agility disguises some pass protection flaws.

About That Left Guard....

As a former Left Tackle, I can tell you that my job was much easier when I had our All Conference Left Guard playing next to me.

Justin Pugh, a man who I would consider to be the best Offensive Lineman on our roster, missed five games this season. There was a rotating door at the position he left behind, where names like Marshall Newhouse, Brett Jones, and Adam Gettis took turns playing next to Ereck Flowers. Now is this an excuse for some technique flaws we see from Flowers? Nope, it sure isn't. But not having Pugh there is an underestimated factor in some of Flowers play. You can be darn sure that Pugh does a lot of little in game coaching sessions with Flowers, and having a reliable inside man to your left makes you feel a lot more confident in your movements at the Tackle position. Remember, we're talking about a 22 year old kid who has only played in the NFL for two years, and only has five years of football experience overall. That's a lot of rawness to be playing the Left Tackle position.

Now a lot of what I've been writing up until now could be written off as "excuses" for Mr. Flowers. And while I would disagree with you, I could also see your point to a certain degree. But there are positives when Flowers plays. the first and most prominent one is his run blocking ability. I doubt that there are many fans out there that would disagree with the fact that Ereck Flowers can run block. He's big, mean, and motivated. When blocking down into his gap, I don't see many defenders that can stop his momentum. Even Defensive Tackles get pushed around by a guy that large.

But lets talk about some of the aspects we don't acknowledge. With all of the technique issues he suffers, we sometimes don't acknowledge when he makes excellent plays in pass protection. With as many "island" pass protection snaps as he gets, there are some gems nestled in there. His long frame allows him to get his vine-like arms extended to the defender and absolutely stonewall their momentum. When a defender gives up hand position and allows the Tackle to get into their pads, they are usually dead in the water. That has been Flowers go-to method of preventing pass rushers from getting to the Quarterback.

Like I said earlier, Ereck Flowers has some glaring issues in his game. He lunges, his arms don't always come up to deliver his punch in time, and he has trouble with speed rushers due to a lack of confidence in his kickslide. But it's not all doom and gloom. This is a rather young man with rather limited experience that needs to be built up and given a strong boost of confidence. Doing this doesn't involve moving him from the Left Tackle position, but bolstering the offense and doing a better job of game planning around the young man's flaws. With a stronger run game and a little more help in the pass game, we could easily see a Conklin-like season from Flowers.

I understand that it's frustrating to watch Flowers struggle, but with perspective his game can be analyzed in a different, more positive light. Tweaks need to be made both on Flowers end and on McAdoo's end. Get a better Running Back. Bolster the right side of the Offensive Line. I promise you, you will see a better player at the Left Tackle position even though the jersey number doesn't change.

As always, I would love to hear from you guys. I know that this is a topic that gets people riled up, so lets try to have respectful conversation about our Left Tackle situation!