Spotlight on Ereck Flowers: What to make of Flowers’ game against Dallas

Have fans rushed to judgment on the second-year left tackle?

Share All sharing options for: Spotlight on Ereck Flowers: What to make of Flowers’ game against Dallas

We should be happy that the New York Giants beat — nay, swept — the Dallas Cowboys. They are the only team to hand Dallas a defeat and they did it on the strength of a renovated defense, a defense that in the span of a single year has gone from being historically bad to the best defense in the league*.

(*The Giants’ defense is tops in just about every statistical category since Week 7.)

But many Giants fans aren’t.

The offense is floundering, and the young man the Giants hope to be their franchise left tackle simply isn’t growing the way the Giants want — need — him to. During the first half of Sunday night’s game, there were loud calls among fans for Ereck Flowers to be benched.

However, he finished the night as the Giants’ fourth-most highly-graded offensive player by Pro Football Focus.

So, as we wind up asking almost every week, what’s the deal with Flowers?

It seemed to be (to borrow a turn of phrase from friend of BBV and Inside Football writer Pat Traina) a tail of two halves for Flowers. But what does a closer look at the tape reveal? 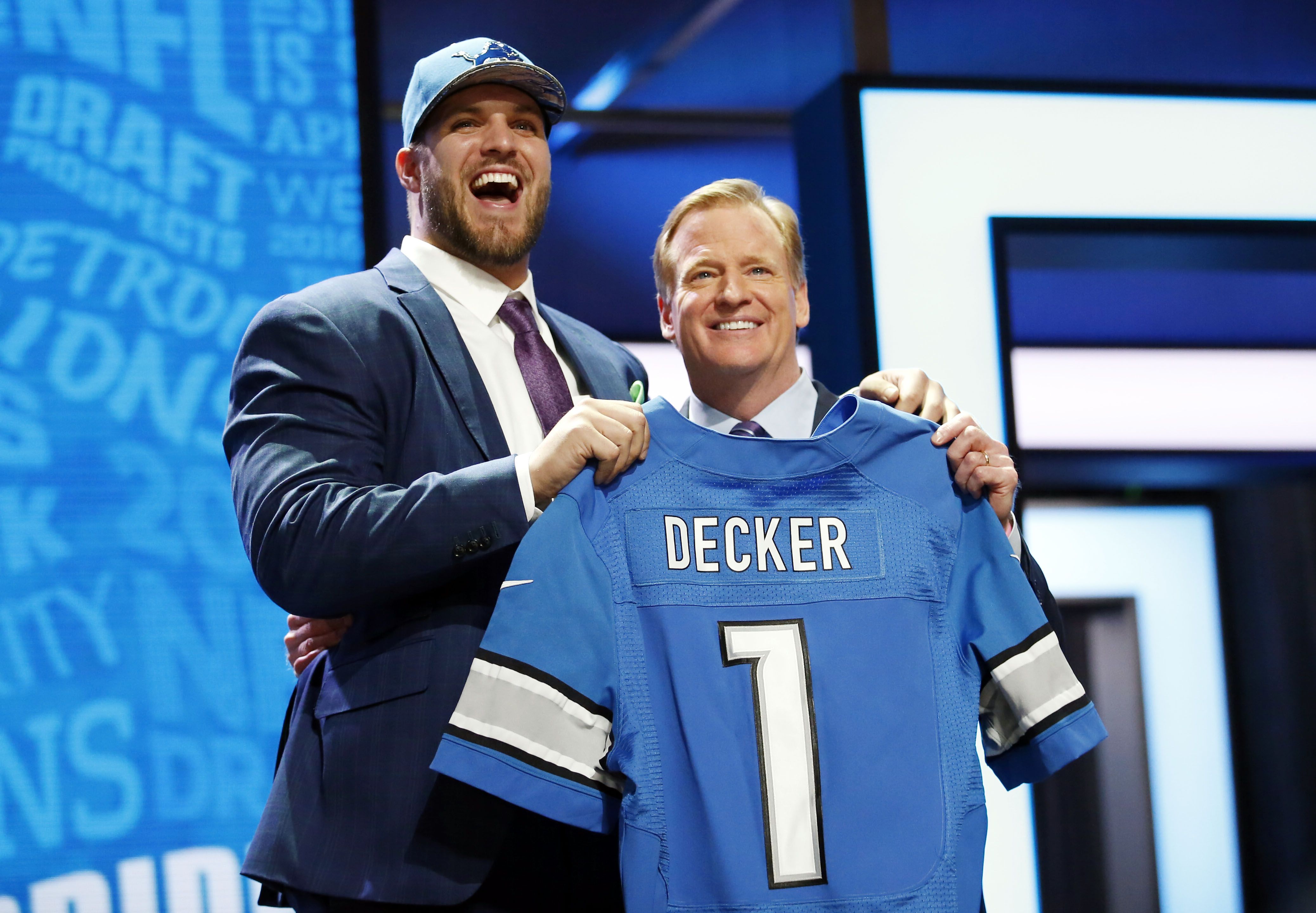 POLL: Which Lion would you pick for Giants?

Taylor Decker? Ziggy Ansah? Vote in the poll and let us know.

Notes: Flowers was hot and cold this half. Well, maybe more like lukewarm and frigid. He had some good reps in pass protection, but too often he turned his hips too much and too early, getting them perpendicular to the line of scrimmage long before he had to. It looked as though he is afraid of being beaten to the outside, but in doing so he makes it easier for rushers to beat him. He also still shows that bad habit of forgetting to bring his hands with him in pass protection, and needs to be much more assertive with his punch.

The Giants played their best football in the “12” personnel (two tight end) set, and those were largely Flowers’ best reps. Interestingly, it didn’t seem to matter whether there was a tight end in-line next to him, detached, in the slot or in the backfield. It might be a coincidence, or perhaps the Cowboys were taken off guard by a personnel grouping and formations other than what the Giants run on 90 percent of their plays.

Flowers’ best reps came on running downs. He still looked a bit tentative to use his hands (perhaps a side effect of all the penalties), but his punch was there and he was effective. 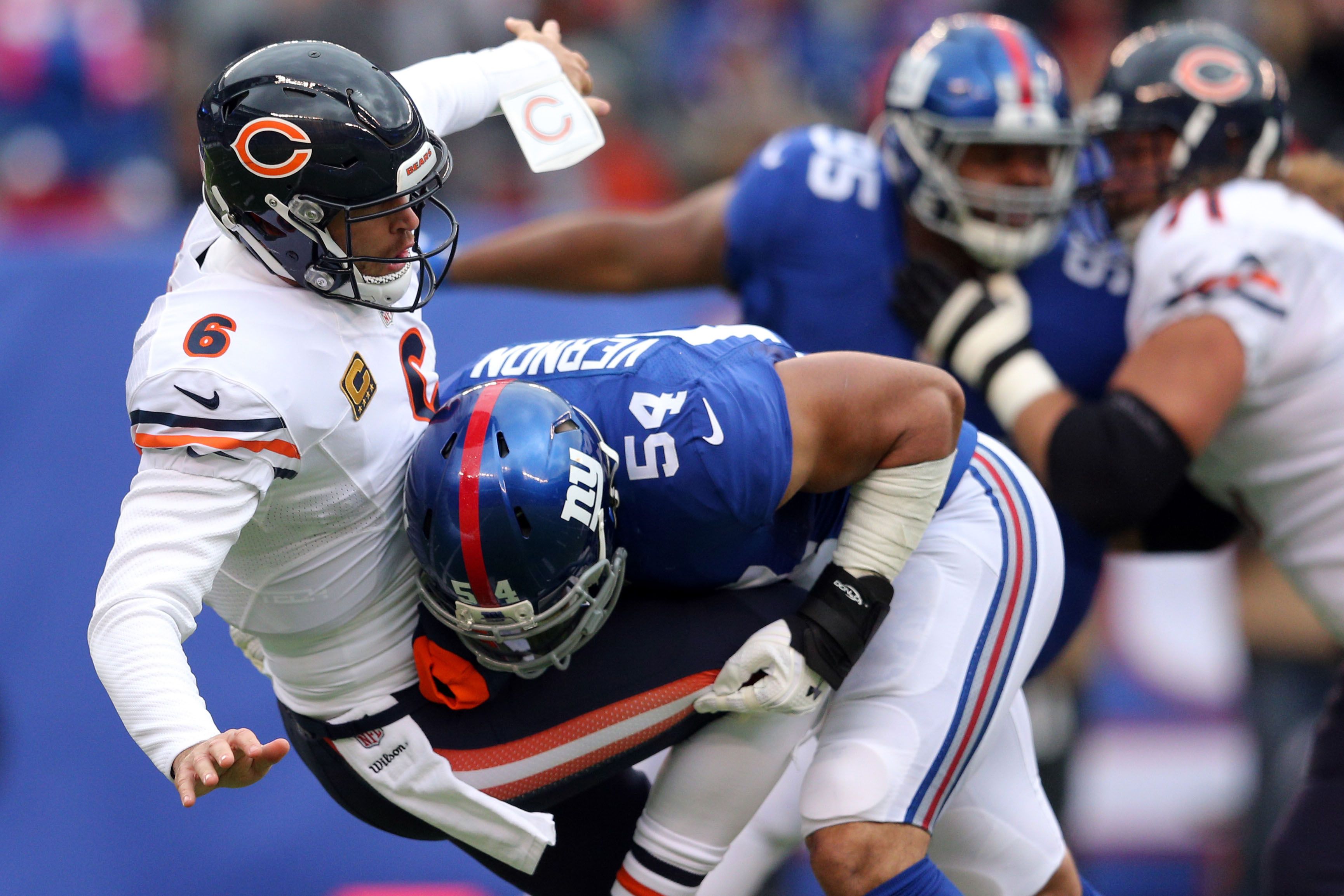 Jenkins, Vernon, Snacks have "fueled one of the biggest defensive turnarounds in league history"

Notes: After a rocky first half, the best word I can use to describe Flowers’ play in the third quarter is “solid.” He was unspectacular in pass protection but did his job, and consistently generated movement in the run game.

The fourth quarter was more of the same. Flowers seemed to have settled in nicely after the half. His movements were smoother and his hand use was more consistent. The Giants actually threw less than they ran (a rarity), but in pass protection I noticed no breakdowns from Flowers. In fact, I only really saw three poor reps, all three on running plays. Two were over-aggression in space and on the third I couldn’t tell if Flowers was at fault or Marshall Newhouse.

It’s interesting that the Giants lived in their three-receiver set after functioning so smoothly in the 2-TE set in the first half. Even when they were trying to run out the clock at the end of the game they brought Brett Jones in as a jumbo tight end, but had neither Will Tye nor Jerell Adams on the field. However, the running game still functioned, and the Giants’ commitment to the run paid off, especially when running behind Flowers.

In some ways the offensive line is the hardest place to play — after quarterback -- in the NFL.

Not only are you matching up against some of the most powerful athletes humanity has to offer every single play, but nobody cares if you do your job. An offensive lineman’s job is almost completely thankless, he can do his job for 59 snaps, but all it takes is one bad play to change the game. And that’s the play that everyone remembers.

Offensive coordinator Mike Sullivan was asked about Flowers’ struggles after the game, and he said, “I think as a younger player, there are always fundamentals that can be improved upon. There's the communication that takes place with the other members of the offensive line, particularly the left guard. I think it's something that he's continuing to work on and we're continuing to do the things we can to help him be successful. Like a lot of the players on our offense, there's a lot of area for improvement and he's certainly no exception.”

Flowers’ first half wasn’t good, especially in pass protection, and everyone remembers the play where he basically helped DE Benson Mayowa sack Eli. But nobody seems to care about the plays where he never let his guy get close to the Giants’ QB. The second half was much better. Flowers was largely stout in pass protection, settling in and doing his job every snap.

But while he was inconsistent in pass protection, running the gamut from terrible to good, Flowers is just a different player when it comes to run blocking. He consistently generated movement, and the Giants’ best runs were behind him. Flowers seems like the kind of player who needs to go forward and get his hands on the defender, to impose his will before he can settle in. Imposing his will on defenders didn’t magically cure his technique issues, but they also didn’t crop up as much, or snowball, as they did in the first half.

And while Marshall Newhouse deserves kudos for stepping up to play a foreign position, the Giants — and Flowers — can only be helped by the prospect of getting Justin Pugh back from injury.

“I think when there's continuity, when you have someone who's played quite a bit, I mean Justin's played a lot of football, that communication is a big part of the success that can take place for the offensive line and that's certainly something that could help improve, we hope, and again, I think it's just a matter of continuing on a day-to-day basis, working the technique, working the fundamentals,” Sullivan said. “There's things that he's aware of that he can improve upon and it's a process.”

Ultimately its games like this that make Flowers such a polarizing player. On one hand, when he has a bad snap, it’s often REALLY bad and ends disastrously for the offense. On the other, it’s also possible to see the tools that got him drafted ninth overall. He is much further along as a run blocker, but there are glimpses of a complete — and good — left tackle. The kind of long-term answer the Giants need up front.

Sullivan put it this way: