Those things you already know if you watched the Giants’ 10-7 victory over the Dallas Cowboys on Sunday night. We also discussed those things in detail already, Chris in his “winner/loser,” and yours truly in “Five things we learned.”

How would the Giants replace Jason Pierre-Paul, who was playing some of the best football of his career before being injured last week? With an undrafted rookie who had zero sacks and three unassisted tackles in limited playing time through 12 games, that’s how. And, amazingly, against the league’s leading rusher and best offensive line, things would work out just fine.

Probably the coolest site in the Giants’ locker room post game was rookie defensive end Romeo Okwara sitting at his locker, located barely inside the entrance to the room, still in full uniform when media entered about 15 minutes after the game. It was like the 21-year-old didn’t want to take the uniform, blood stain on the left thigh pad and all, off after the game of his life.

Okwara had his first career sack, a team-leading eight tackles, three hits on Dallas quarterback Dak Prescott and a pass defensed while playing 60 of the Giants’ 66 defensive snaps. Afterwards, he told the throng of reporters around his locker that he just “did my job.”

Maybe, but the job he did was a whole lot more than anyone could have expected. 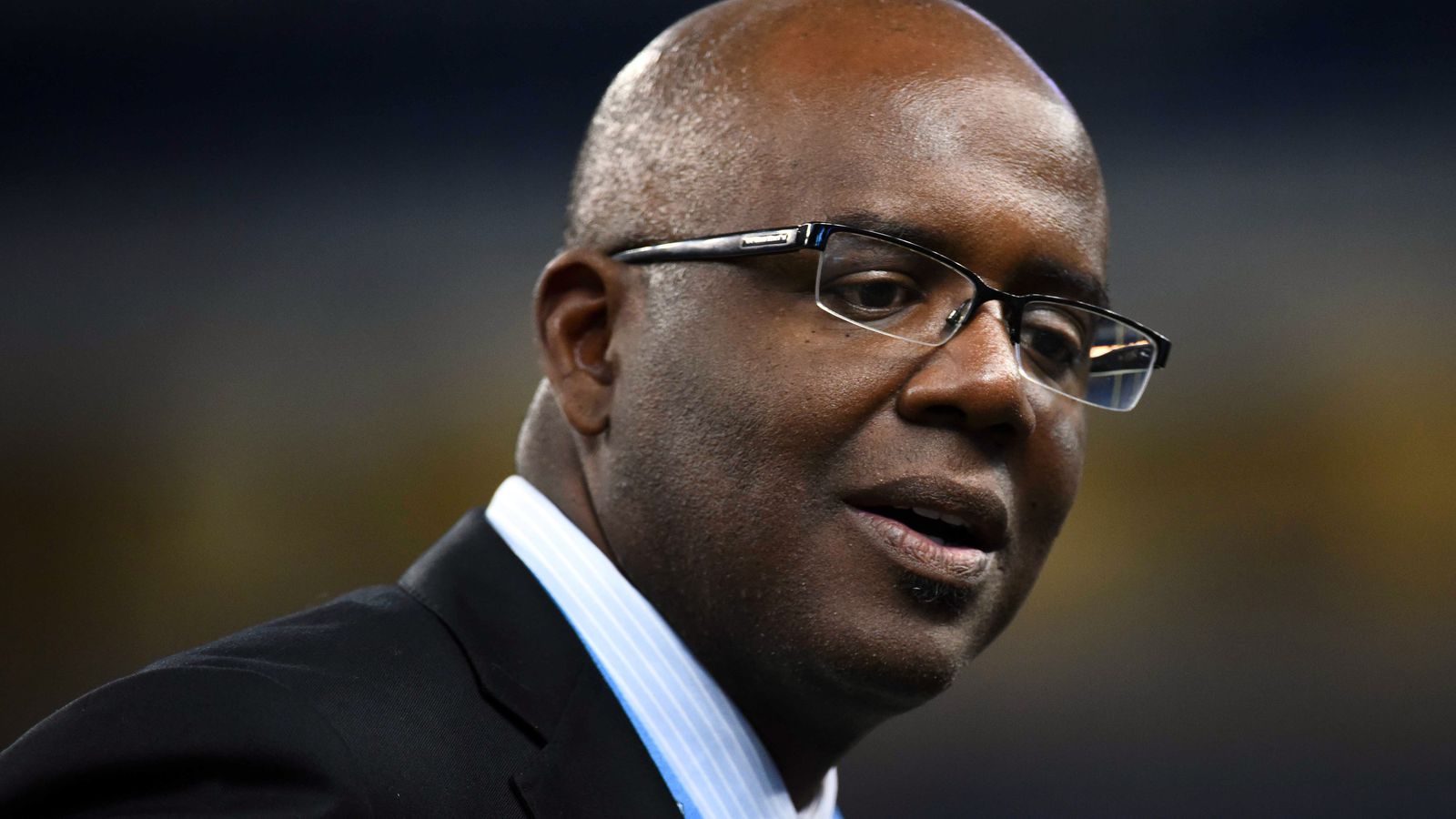 If jobs come open, these Giants might receive a phone call

Janoris Jenkins — Jenkins, who spent most of the night covering Dez Bryant, was targeted eight times. He gave up one reception, forcing Bryant to fumble when he did make that catch. Jenkins had an interception, fighting through Bryant to make it. Per Pro Football Focus, Dallas quarterback Dak Prescott had a 0.0 passer rating when targeting Jenkins. You can’t do any better than that.

Devon Kennard — Perhaps lost in the attention paid to Okwara was how much of an impact Kennard had on this game. A linebacker by definition, Kennard lined up Sunday night at both defensive end and defensive tackle in passing situations. He registered his first sack since 2014, forcing a Prescott fumble on the play. In just 39 snaps, he also had six tackles, a pass defensed, two tackles for loss and a hit on Prescott. His versatility is a huge asset to the Giants’ defense.

Dwayne Harris — Field position is everything in a defensive struggle like the one the Giants and Cowboys were in Sunday. Harris made two brilliant special teams plays to down Brad Wing punts inside the Dallas 5-yard line Sunday night. 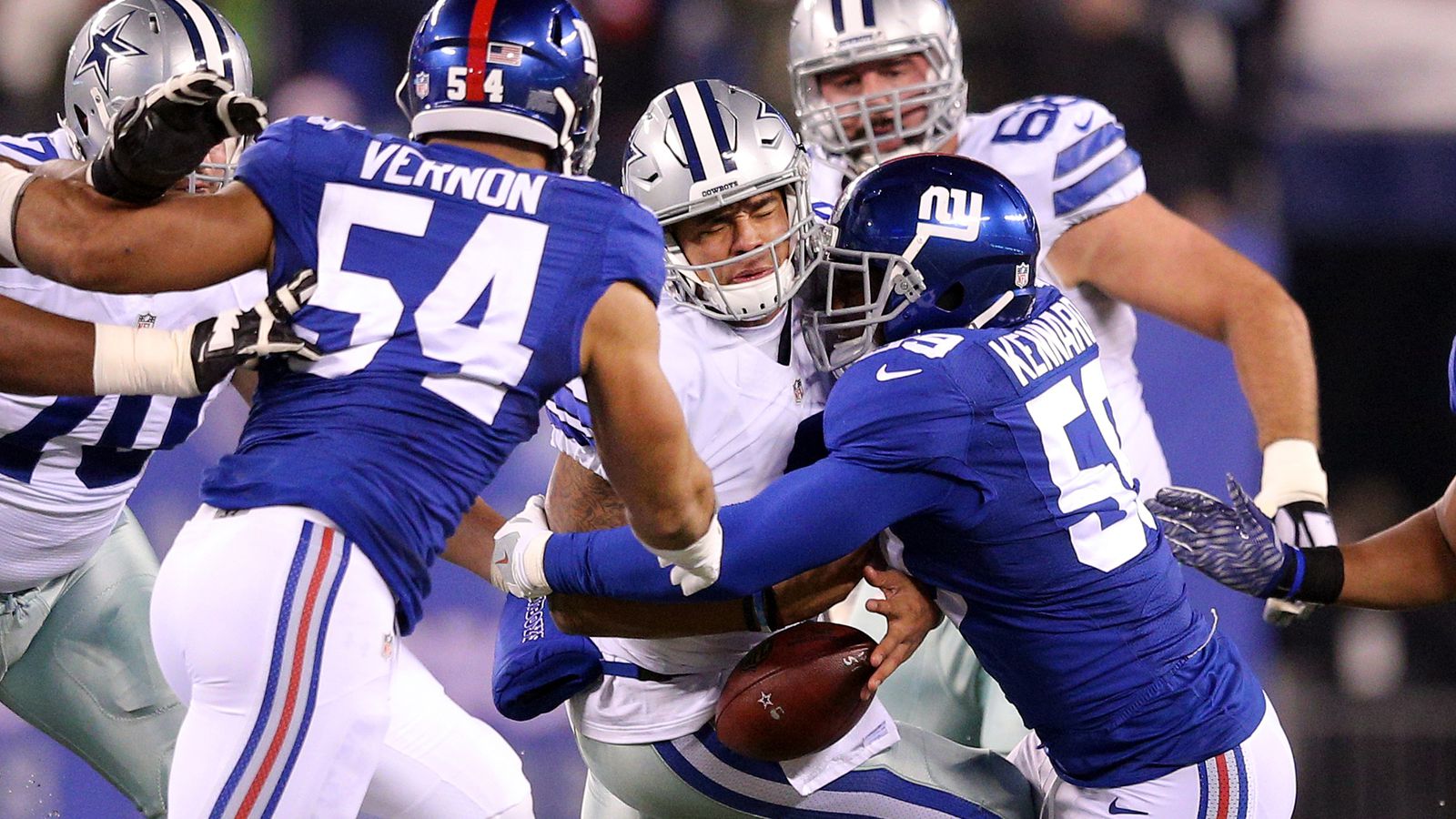 Eli Manning — The two-time Super Bowl MVP quarterback has to be able to play better than this. Doesn’t he? The stats tell you that Manning was a a pedestrian 17-of-28 for 193 yards with a touchdown and an interception. They don’t tell the story. There was a brilliant deep ball from Manning that Odell Beckham Jr. dropped, but other than that he was awful.

Manning fumbled twice, including once when the ball slid out of his hands while he was untouched. He had his third straight game of less than 200 yards passing. He easily could have thrown four interceptions, with Barry Church of Dallas dropping two potential picks and a Cowboys’ linebacker narrowly missing another.

Manning has, of course, always had head-scratching games and moments. It is inexplicable, though, to watch him play this poorly for such an extended period of time.

Victor Cruz — The veteran wide receiver whined a week ago when he was never targeted by Manning in a loss to the Pittsburgh Steelers. This week, Cruz was targeted four times and did virtually nothing to show he should be a bigger part of the offense. Cruz had one catch for four yards. He had a drop on a short, easy throw. He had a pass intended for him intercepted. Maybe you can question Manning for throwing the pass to Cruz that Cowboys’ cornerback Anthony Brown picked off. You can also, though, question Cruz’s inability to come back on the ball, which allowed Brown to undercut it. Advice to Vic — when you beg for the ball, you need to actually produce when it does come your way. Sunday night, Cruz did not.

Ereck Flowers — I don’t know what the final numbers are in terms of pressures allowed by Flowers. I do know he almost got Manning killed in the second quarter when he let Benson Mayowa of Dallas around the edge for a sack/fumble. The play ended a scoring threat with the Giants at the Dallas 38. The second-year pro is only 22, but he isn’t showing the progress to make you believe he is the long-term answer at left tackle.

Odell Beckham Jr. — The star wide receiver made the play of the night for the Giants’ offense, his 61-yard catch-and run touchdown in the third quarter. It was, really, the only play the offense made all night.

Thing is, as game-changing and electrifying as the play was, it is impossible to completely overlook Beckham’s miscues Sunday night. There were two dropped passes, including one that would likely have gone for a 31-yard touchdown. At least it would have given the Giants first-and-goal inside the Dallas 5-yard line. Instead, the Giants got nothing because two plays later Manning fumbled. The other drop might have given the Giants a first down in the red zone. Instead, they settled for a Robbie Gould field goal. There was also Beckham’s muffed punt, which he luckily was able to recover.