Improving the offensive line is a priority for the Giants, so today is an important day.

Attention, New York Giants fans! You might want to set aside some time on Friday because offensive linemen will be among the first group of players going through on-field drills during the 2015 NFL Scouting Combine at Lucas Oil Stadium in Indianapolis. Coverage on NFL network and various online and mobile platforms begins at 9 a.m. ET

That means you get to see and judge for yourself when it comes to many of the questions we have been debating for the last several weeks.

Is the much-discussed Brandon Scherff athletic enough to play tackle? Or, as Mike Mayock believes, could he be an All-Pro at guard? Remember, Mayock listed the often mocked to the Giants Scherff as a guard in his position rankings, and explained that this way: 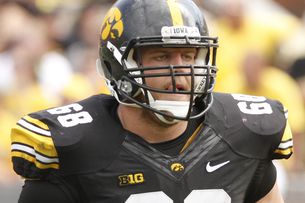 "I think he can play tackle. I think he can start. I said this about Zack Martin last year. I thought Zack could play all five positions in the offensive line.

"When I look at Brandon Scherff, I see a similar example. I see a bigger kid with longer arms. That lends you to believe that he could play outside more easily.

"Again, I believe he can play outside. However, I think his best position, because of his power, his toughness, his football sense, is inside. I think he's an all pro guard. But that doesn't mean he can't play tackle in the NFL."

There are, of course, plenty of other offensive linemen who could go in the first round and could be considered by the Giants at No. 9.

"I don't know that we're ever going to have a consensus on the top offensive lineman in this draft," said Scott Wright of Draft Countdown. "I think this is gonna be a class where even right toward the draft you ask five different people you might get a completely different top three to five. Everyone is going to have pretty much the same group of five, it's just a matter of what order."

Let's look at the others:

La'el Collins, OT, LSU -- The common perception is that Collins is a guard at the NFL level. Can he change that?

Andrus Peat, OT, Stanford -- Draft Countdown's Wright said Peat is the "most talented offensive lineman in this draft, but his play is inconsistent. I don't think he always plays up to the level of a top 10 overall draft pick even though he's got that type of physical talent and ability."

T.J. Clemmings, OT, Pitt -- A player who has only been playing offense for two years, and has very little overall football experience. Scouts love his physical tools, however. Monday Morning Quarterback recently had an interesting look at Clemmings, the biggest project among the top linemen but a player who Mayock believes has "unbelievable" upside."

Maxx Williams is the best tight end in this draft class. Is there anyone else who could help the Giants?

Other Names To Know

Ali Marpet, a Division III guard from Hobart College, is a player who apparently intrigues the Giants, with Walter Football reporting that Marpet could be a Day 3 target for New York.

Diamond Talbot of NFLDraftDiamonds says Marpet "is a super strong kid, who is athletic for his size. He gets to the next level easily and has power to move players."