We find out today.

The stars have aligned for the New York Giants. The dominoes have fallen just right. The table has been set. Put it any way you want, opportunity is knocking -- LOUDLY -- for the Giants. The football Gods have dropped the NFC East into the Giants laps, whether or not they have played well enough to deserve that. Now, can the Giants grab that opportunity and hold onto it. Or, like so much already has this season, will they let it slip through their fingers?

When the Giants face the Washington Redskins this afternoon at Fed Ex Field (1 p.m. ET/FOX) they can take command of the NFC East. They can't outright win the division, but they can come pretty close to putting a stranglehold on it.

The 3-8 Dallas Cowboys have virtually no chance with quarterback Tony Romo out for the rest of the season with another clavicle injury.

The 4-7 Philadelphia Eagles have lost three straight and there is more talk in Philly about the Eagles having packed it in while they wait to find out where Chip Kelly will coach in 2016, since it appears to be a long shot that it will be in Philadelphia. 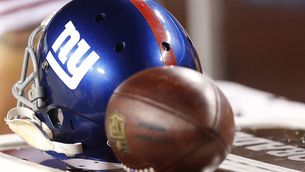 The last domino that needs to fall is the Redskins, who would also fall to 4-7 if the Giants manage to win Sunday. That would put the Giants at 6-5, give them a two-game division lead, the head-to-head tie-breaker over the Redskins and give the Giants a chance to end up with a 4-2 record in the division.

To knock over that last domino the Giants have to stop tripping over the one two feet and knocking everything askew. With all of the injuries and incompetence around them in the NFC East, the only thing standing between the Giants and already having sewn up the division title is their own blundering in the final moments of winnable games. Let's not belabor them, but four times the Giants have snatched defeat from the jaws of victory in the final two minutes of games this season.

"You have to come out and take care of business. Can't overlook anybody ever even with the lead in the division. One game at a time," said Giants wide receiver Odell Beckham Jr. "It's just that time of year where everybody needs to step it up, we all need to come to work and bring our A+ game every single day and it will translate on Sunday."

The Giants have beaten the Redskins five straight times. At least two of those games have been one-sided. If the Giants can continue that domination on Sunday, they should be well on their way to a division title despite entering the game with a .500 record.

"You have to earn it every time you play," warned head coach Tom Coughlin. "Past records mean nothing."

The Giants will enter the game with a reconfigured offensive line. With left guard Justin Pugh (concussion) already ruled out and center Weston Richburg (high ankle sprain) not likely to play, the Giants will move Geoff Schwartz from right to left guard and play John Jerry at right guard. Dallas Reynolds will play center if Richburg doesn't go.

The Giants are favored by anywhere from 2 to 3 points depending on which service you use. The Big Blue View staff is unanimous in picking the Giants to win this one.