It's time to autopsy the Giants 2014 season opener and find the exact cause of defeat.

[Note: This is going to be a recurring piece after every game day. As you may have guessed, I'll be looking at a number of plays that changed the game. It might only be one play, it might be five, they might be offensive, defensive, special teams, or a mix of all of the above.]

But it really didn't have to. The Giants didn't make two plays that essentially sealed the game for them. So let's start at the beginning, it's a good place to start.

Unfortunately for us (and the New York Giants) the tone for the game was set early on with a Calvin Johnson touchdown on one of the ugliest busted plays I've seen in some time (at least since the last time I watched Major League).

It might not be pleasant, but let's take a look at what went so wrong:

This play actually doesn't start all that bad. The coverage is initially good, and the pass rush collapses the pocket, forcing Stafford to scramble. Then it all goes awry pretty quickly.

Damontre Moore has a clear shot on Stafford, which he takes. However, he lunges forward aggressively, and gets juked (Really Damontre? Getting juked like that by a QB not named Vick? Granted, I've never seen Stafford move like that before, but still). That opens Stafford up to launch the ball deep down field.

Meanwhile in the  secondary this happened: 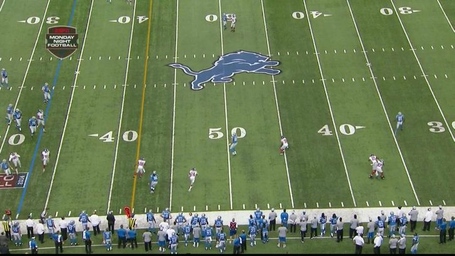 Dominique Rodgers-Cromartie was in coverage on Johnson, and it was good enough to keep the ball in Stafford's hand long enough to force him out of the pocket. As Stafford was flushed from the pocket, Stevie Brown came over to help with the coverage on Megatron.

What I can only assume is a mis-communication first caused both the safety and the cornerback to turn their eyes off the incredibly dangerous receiver (I'm guessing at least one was supposed to actually still be covering him) to look back at the quarterback. Then one ran into the other.

This was the first of several busted coverages that actually made me more nervous when the Lions were in a long down and distance than when they were in third and short.

If there's one thing the defense needs to work on this week, and going forward, it is buttoning down the communication in the secondary and getting them all to play to their talent level (not just Prince and Rolle).

Despite two busted coverages that led to touchdowns, it was still only a one score game going into the half. With the Giants making several impressive defensive stops putting together a nice scoring drive, and getting the ball to start the second half, it seemed we actually had a ball game on our hands.

Whatever momentum the Giants had scraped together slipped way at the start of the second half.

Who played well and who did not for the Giants on Monday night.

Who played more than expected? Who did not play as much as expected? Let's look at the snap counts for the Giants from Monday night.

This play is just a blatant communication breakdown. While Eli is audibling before the play we can see him signal directly to Donnell, likely putting him on alert with the blitz coming. This is designed to be a very quick hitting pass over the middle to pick up the first down.

The Giants are in shotgun, with Eli taking a quick two-step drop -- Jon Gruden pointed out last night that one of the changes McAdoo is making to Eli's mechanics, is that instead of the three-five- and seven-step drops Eli took in Kevin Gilbride's offense, McAdoo is having Eli take two- four and six-step drops -- and throwing the pass over the middle to (roughly) the 27-yard line. It looks as if Eli is expecting Larry Donnell to run a stick route, come back to the ball suddenly, then get up-field to pick up the firstdown. Instead, Donnell runs a post route, and doesn't even look for the ball until he makes his break at about the 33-35-yard line.

With the offense still figuring out how to play offense, the Giants needed to play a clean game when they had the ball, and do their best to contain the Lions' explosive offense. For a while, it seemed like they might actually pull it off.

A couple blown coverages put the Giants in a deep hole early, but it looked like they had managed to shut down the Lions' rushing attack and mostly contain their passing attack. The offense was even showing some signs of life an coherency as they strung together a scoring drive.

Then the mis-communications that have plagued the offense all preseason reared their ugly heads, and robbed the Giants of any chance they may have had to escape with a victory (or even a close loss).