'Hogs Haven' enlightens on the state of the NFC East rival Washington Redskins.

Share All sharing options for: Giants at Redskins 2014: Five questions with 'Hogs Haven'

With the New York Giants in, or more accurately near, the nation's capital Thursday night to face the Washington Redskins, let's check in with our friends at SB Nation's Redskins web site, 'Hogs Haven.' Our 'Five Questions' segment this week is with the appropriately monikered 'HogHunter.'

Ed: Let's get right to it. Are the Redskins a better team with Kirk Cousins at quarterback than they are with Robert Griffin III?

HogHunter: They are definitely different QBs. They are both learning a new offense, but Cousins has a little more experience in this type of system, and he was excited when Jay Gruden was hired for that reason. Griffin is still adjusting to the new offense, while Cousins seems comfortable in it. But we only saw Griffin operate in this offense for one game and two series in Week 2. He was highly efficient vs the Texans, but mistakes by him(fumble), and the rest of the team added up to a loss. Gruden didn't use any read option in Week 1, but used it on the first play against Jacksonville, and it opened up the defense(not that they needed much help.)

Cousins has done a lot better than people have expected. He has been able to move the offense efficiently, score points, and has only turned the ball over once. He also makes quick throws and decisions in the pocket, gets the ball out quickly, and throws his receivers open which Gruden expects his QBs to do. But he also tends to stare down his first option, forces balls, and misses some open receivers.

No one knows when Griffin will be back, the cast came off yesterday and now he will be reevaluated. I thought he was done for the season with the injury, but he could push to come back after the Week 10 bye. If Cousins starts piling up wins it will get interesting for Gruden. He's avoided the question by saying we'll deal with that when the time comes, and crazy things happen in the NFL. I think this team will give Griffin every chance to succeed and be the franchise QB.

What did Redskins fans want to know about the Giants? Here are my answers to their questions.

Ed: What are your thoughts on Jay Gruden? Does he have the right stuff to be the coach in Washington long-term?

HH: I have liked what I've seen for the most part from Gruden, but I'm not going to judge his long-term job security after 3 games, especially in Washington. He's taking over a team that was a demoralized mess last year after Anonymous became an official source for all information coming out of the locker room. Gruden's called good games the last two weeks, but I was disappointed in him for not running Alfred Morris more in Week 1 against the Texans. The team was cutting them up on the ground and needed to continue doing it.

The team's also got to get more disciplined with penalties, and I put the blame for that on coaching, but also the team captains have been getting dumb penalties so I don't know. Gruden's 0-3 in challenges this season, and that's another area he has to improve in.

I think he's a capable head coach, but if Cousins does really well and the team starts winning, it could cause a big headache for him early in his career. Washington loves their backup QBs, and their QB controversies.

Ed: If you were game-planning AGAINST the Redskins how would you attack them? Offensively and defensively?

HH: Defensively you have to stop Alfred Morris and the run game, and also get pressure on Cousins. The Redskins have been a run first team for...ever, and stopping that is key. It also sets up our passing game. Morris is still averaging the 5th most yards per game in the league, but he also got a little dinged up last week when Cousins helmet was pushed into his knee.

Cousins is bottom 3 in the amount of pressure he was received in his two games this year. So pressure him and force mistakes and bad decisions. He has been very good at getting rid of the ball quickly to avoid the rush, but as you saw in his starts last year he can make bad, costly decisions.

Offensively you have to attack the secondary which is by the weakness on the team. Get Brandon Meriweather in a bad matchup and it's almost a guaranteed reception. Ryan Clark is a good safety and a big hitter, but he's also slowed down. The two young cornerbacks should be tested early and often. The Redskins have had a good run defense, and worked hard to shutdown LeSean McCoy last week. But they gave up 100+ yards in Week 1 to Arian Foster, so you still need to test them. The Redskins DL is really beat up, so wear them down, and work from there. 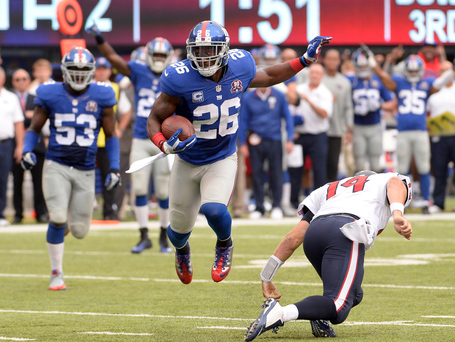 Ed: If you could take one player off the Giants roster and put him in your starting lineup who would it be? Why?

HH: I want to say Antrel Rolle, just because our safety situation is so shaky. He matches the Washington criteria for a free agent pick up/trade. He's 30+, has a big contract, former 1st round pick and might have a few good years left but would probably flame out here early. But seriously I'm not a fan of the Redskins safeties, particularly Brandon Meriweather and any upgrade there would be welcome.

Ed: Who are a couple of young players Giants fans might not know much about why we should watch for on Thursday?

HH: DeAngelo Hall went on IR this week after suffering a ruptured Achilles tendon against the Eagles. Expect to see 4th round rookie CB Bashaud Breeland step into the starting CB role along with second-year CB David Amerson. Tracy Porter, who was signed in free agency but hasn't played yet, could be back tomorrow, but he will man the slot if he plays.

Third- year guard Josh LeRibeus will probably get the start in place of the injured Shawn Lauvao, and he might actually be an improvement. LeRib came into the game last week after Lauvao left with knee swelling and played well for almost half the game.

Rookie Ryan Grant will be active and could get some looks tomorrow night. He had some nice receptions all through training camp and during the preseason. He saw more playing time in Week 2 after DeSean Jackson left the game, and had five catches for 57 yards.