Giants vs. Texans, Week 3: Three Plays That Changed The Game

The Giants won the game Sunday, but which plays changed the course of the game in their favor?

Share All sharing options for: Giants vs. Texans, Week 3: Three Plays That Changed The Game

The New York Giants got their first win of the 2014 season in dramatic fashion in a rout of the Houston Texans. Though the Giants were in the driver's seat on offense and defense for most of the game, there were still some key plays that helped to swing the flow of the game in the Giants' favor.

The Giants had been slogging through a rough first quarter and trying desperately to get out of their own way. The offense had been marching the ball down the field, but miscues in the red zone kept the Giants off the board and the Texans in the game early.

Then, to cap another efficient drive, Eli Manning hit Victor Cruz on a 26-yard catch-and-run for a touchdown. 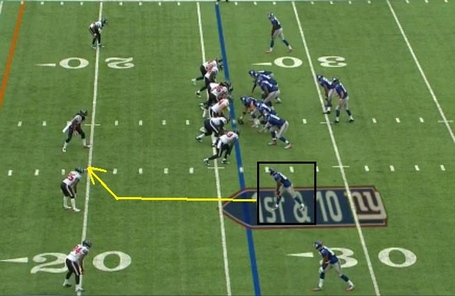 The Giants are in their typical 11 personnel (3 receivers, 1 tight end, 1 running back) shotgun set. Corey Washington is at the top of the screen, Rueben Randle at the bottom, and Victor Cruz in the slot (black box). The Texans are showing heavy blitz, and do in fact bring the heat -- though one "blitzer" drops back into coverage.

Cruz is running a quick slant route designed to get in front of the defensive backs and behind the blitz.

First and foremost, the offensive line did a great job of picking up the blitz and giving Eli a nice pocket to throw from. Also, Cruz ran his route very well, with a sharp break on the ball to make sure the defensive back was defending the first down marker and he had plenty of room to catch the ball cleanly.

The last part of this play is Victor Cruz doing Victor Cruz things. He makes the first man miss like he has so many before, then picks up a block by Rueben Randle and it's off to the races. Cruz has never been a true burner, but his explosive acceleration makes it very hard for anyone he gets a step on to beat him. 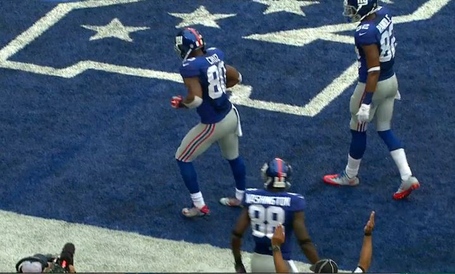 Play 2 - A Pick Before The Half

When he talked to the media this week, defensive coordinator Perry Fewell talked about the need for the defense to create turnovers and put the offense in a good position. One minute, 16 seconds after Victor Cruz scored his touchdown, Antrel Rolle came up with his first interception of the season. With the Texans backed up to the tune of third-and-19, Rolle did one of the things he does best and jumped a route to give Ryan Fitzpatrick his second interception of the game, and season. 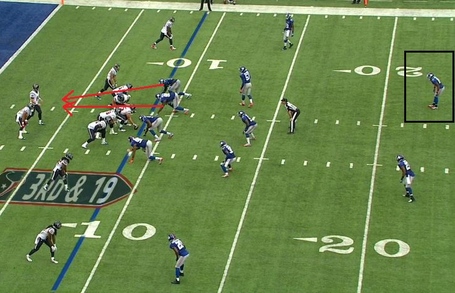 At the start of the play the Giants line up in a nickel package with all four DEs up front, man coverage on the corners, and the safeties in a cover-2 shell (Rolle is in the black box). 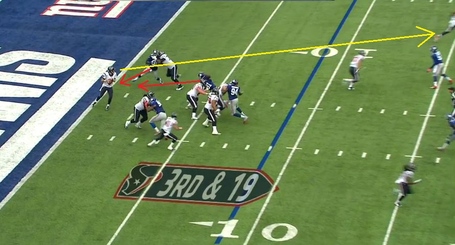 A couple frames forward, we see Jason Pierre-Paul and Robert Ayers generating a lot of pressure on Fitzpatrick, who is staring his receiver down. JPP has soundly beat the left tackle, and Ayers is about to beat the left guard. 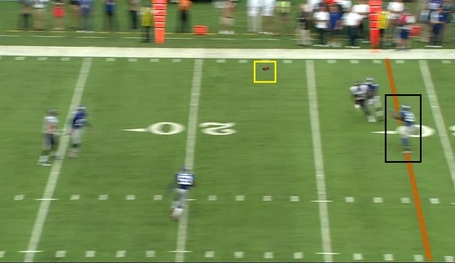 With Fitzpatrick staring his receiver down -- who is pretty well covered by Prince, by the way -- Rolle gets a great jump on the route and gets to where the ball is going to be before the receiver does to make the pick. 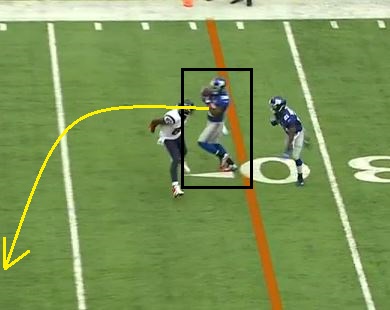 They also talked about scoring on defense, and Rolle did his best to do that too. He couldn't quite make it into the end-zone, but his 25-yard return set Rashad Jennings up for a touchdown run to put the Giants up 14-0 going into the half.

Play 3 - Coughlin Saw What You Did There

During the half, Texans head coach Bill O'Brien did one of the things he was hired to do and made some adjustments on offense and defense. As a result, the Texans started to show some life in the second half. Giants coach Tom Coughlin took a personal hand in taking the wind out of the Texans' sails.

On a crucial third-and-8 with 10:57 left in the game, and the Giants up 20-10, Fitzpatrick showed the elusiveness that had frustrated the Giants all game long and scrambled to seemingly pick up a first down.

After Fitzpatrick was tackled by Trumaine McBride, oughlin threw the red flag and challenged the spot of the ball. As he so often has in the past, Coughlin won his challenge and forced the Texans to punt. 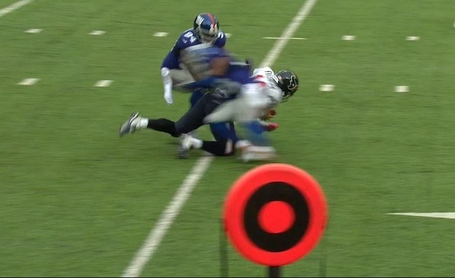 A punt which the much (and deservedly) maligned special teams unit blocked -- courtesy of Damontre Moore -- to set up Eli Manning's second touchdown on the day.

The Giants still have work to do, and they have yet to play four quarters of good, clean football. However, the defense is becoming more complete generating turnovers to compliment the pressure and run defense by the front seven. The offense is improving by leaps and bounds every week, and the special teams even got in on the action and broke even on the day.

For the first time this year, the Giants made all the plays to change the game in their favor.

Giants vs. Texans: Giants get first victory of season