The Giants have to find a way to get Jernigan, a slot receiver playing out of position on the outside, into areas where he is comfortable. Can Ben McAdoo do that?

When the New York Giants open the regular season on Monday vs. the Detroit Lions how will they deploy their revamped group of wide receivers? What is the best way to get production out of a group that, aside from Victor Cruz, still has much to prove?

With rookie offensive coordinator Ben McAdoo at the controls the Giants showed a propensity for three-wide receiver sets during the preseason. Those found Rueben Randle and Jerrel Jernigan on the outside, with Cruz in the slot. Cruz, of course, is one of the best in the business as a slot receiver. During the preseason, both Randle and Jernigan struggled at times on the outside.

Head coach Tom Coughlin pleads for media to back off the Beckham questions.

First-round pick Odell Beckham Jr. never played in the preseason due to his ongoing hamstring injuries and has rarely practiced since originally suffering the injury in OTAs. Beckham seems unlikely at this point to be a major contributor to the offense until the second half of the season. Beckham will be sidelined for 2-3 more more weeks.

That leaves the three aforementioned starters along with rookie preseason sensation Corey Washington and Preston Parker to handle the receiving chores for Eli Manning.

It is no secret that the Giants passing attack sputtered during preseason with Eli Manning completing only 20-of-41 passes (48.8 percent) for a 70.0 passer rating and a team-worst Pro Football Focus grade of -9.7.

One of the keys to getting production from this group of wide receivers is going to be unlocking the play-making ability Jernigan showed in the final three games of 2013 when he emerged as a player after nearly three years of being unproductive, catching 19 of his career-high 32 passes.

Again and again I have written that Jernigan struggles on the outside, and the numbers clearly back up the fact that he is more productive working from the slot. Jernigan's 22-yard reception against the New England Patriots last Thursday came on a shallow in-cut when he was lined up for one of the rare times in the preseason as a slot receiver.

The chart below comes from Pro Football Focus. It shows where Jernigan's preseason receptions were made and each time he was targeted. Look at the 5-for-5 across the middle on throws of less than 10 yards. That is prime catch-and-run territory, and though this is a small sample size indicates that is where he is most effective. 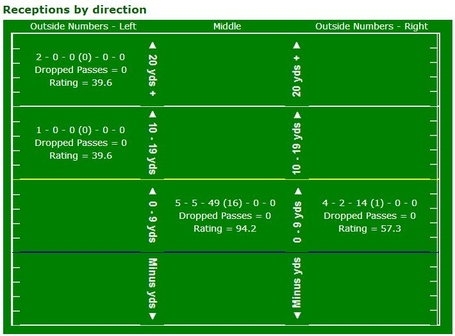 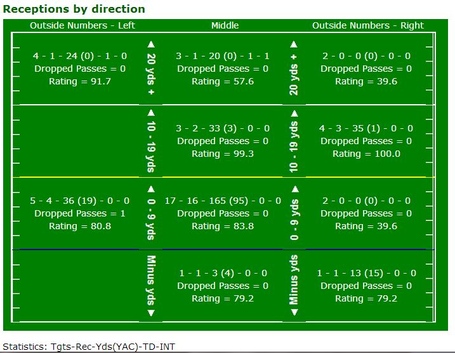 Look at the numbers down the middle of the field, territory usually worked by a slot receiver. He was targeted 24 times between the hash marks and made 20 of his total of 32 catches. In that short area of less than 10 yards he caught 16 passes in 17 targets, an astounding rate of efficiency.

So, what is McAdoo to do here. Clearly, Jernigan is not better than Cruz. That means if Jernigan is going to play, and the Giants need him to play, he has to be lined up outside in those three-receiver sets.

McAdoo has to find ways to get Jernigan to run routes inside the numbers, however, rather than out on the boundaries where his 5-foot-9 frame makes it harder for him to create separation from defenders.

One way to do that would be shallow crossing routes. Another might be bunch sets that might help Jernigan and other Giants receivers get a clean release from the line of scrimmage.

Another option? Replace a tight end with a fourth wide receiver, most likely Corey Washington, is some passing situations. Washington, at 6-foot-4, 214 pounds, is an outside the numbers guy. That would allow Jernigan to line up inside at least some of the time.

At any rate, if the Giants are going to get their passing attack going when the games begin to count Jernigan has to be a part of that. It is clear with the personnel the Giants have that allowing him to run routes in areas where he is comfortable is going to challenge McAdoo's creativity.