Giants vs Cardinals: Plays That Changed The Game

For the second time in two years the Giants open the season 0-2, but how did it happen?

Share All sharing options for: Giants vs Cardinals: Plays That Changed The Game

You know, for about a half I thought the New York Giants were going to come through with a win on Sunday, and that this was going to be fun to write.

Then, of course, they managed to snatch defeat from the jaws of victory.

This play, I think, took the life out of Cardinals and sparked the Giants to take their first lead of the year. 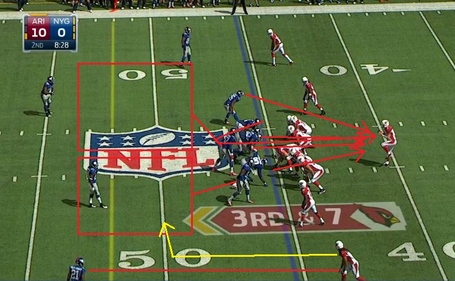 This play had a LOT going on. The Giants lined up in an unorthodox (for them) 3-4 alignment.

Cullen Jenkins as the defensive tackle while Mathias Kiwanuka and Jason Pierre-Paul played the ends.

The linebacker spots were manned by (top to bottom) Antrel Rolle, Jon Beason, Jameel McClain, and Jacquian Williams. Rolle and Beason are showing blitz while McClain and Williams back off into a shallow zone coverage.

Also, the play has Kiwi stunting inside of Jenkins (notice the bendy line)

Furthermore, the Giants are in a nickel package with Walter Thurmond playing one of the safety positions. 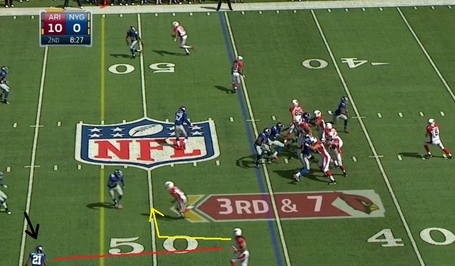 After the snap we see Fitzgerald starting his route while DRC reads the QB's eyes -- Stanton is basically staring at Fitzgerald -- and starts to break in on the pass. Elsewhere, McClain is in coverage on the slot receiver, while Antrel Rolle is running free to the QB. 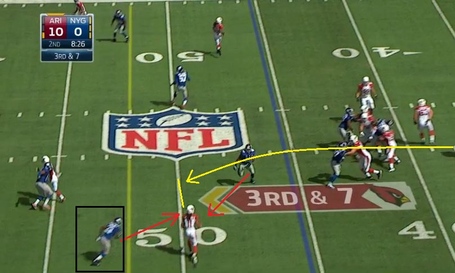 Off-screen, Rolle has put a hit on Stanton, but nt before he could get the ball off (yellow line). DRC and Williams are both breaking on the ball, with DRC getting an excellent jump. 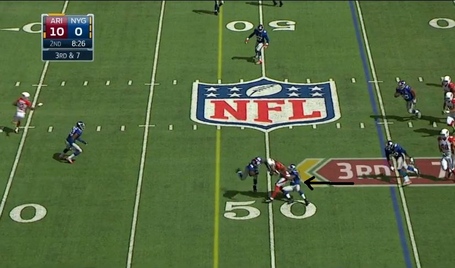 Finally we see DRC finish what could be the most physical pair of plays (counting the previous one where he bent Michael Floyd in half to separate ball from receiver) in his entire career. He has Fitzgerald wrapped up tightly and his swinging him away from the 1st down marker while Williams and the rest of the cavalry come in to make sure the job gets well and truly finished.

Play 2 - Cruz Dropping The Ball, and The Game

The Giants were ahead. They weren't only ahead, but they had all the momentum and the Cardinals on the ropes. 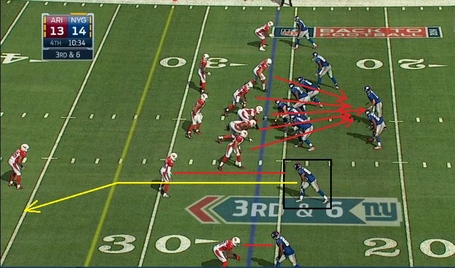 The play starts out innocently enough. The Giants are in their normal 3rd down alignment: Shotgun, Rashad Jennings next to Eli Manning, Victor Cruz in the slot next to Rueben Randle. The Cardinals are showing blitz, with an coverage across the board. 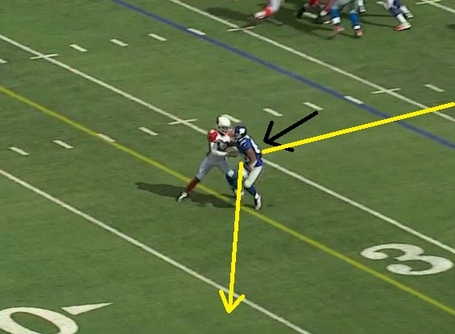 Cruz is matched up on Jerraud Powers, who is in off coverage. Cruz runs his route well, and extends the stem of his route right into Powers. Under the NFL's new "Point Of Emphasis", this might have drawn a penalty ensuring the first down, but it also gets Powers back on his heels, and unable to follow as Cruz makes his cut. 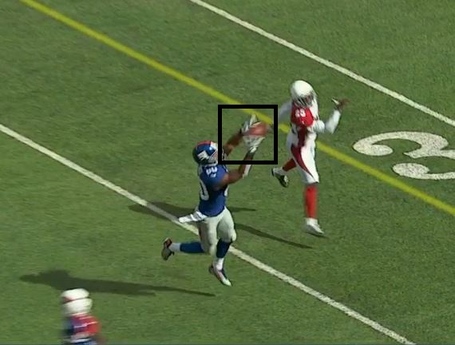 A few frames further along and we see Cruz with Powers soundly beat and the ball in his hands. How many times have we seen Cruz reel these catches in, plant a foot in the ground and turn up-field for a big gain or touchdown? 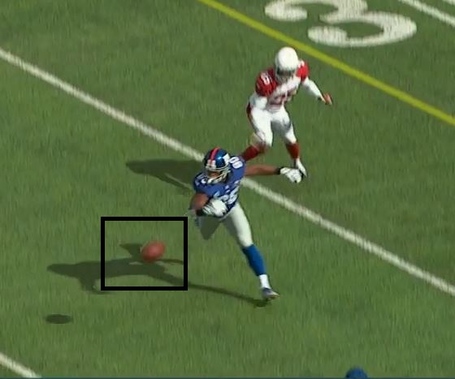 And this pretty much sums up the rest of the quarter.

This is a game the Giants should have won. After the defensive series capped by DRC's game changing tackles on third down, the Giants had the momentum, and the spark they needed to claw their way back into the game. We could all see the offense start to really click for the first time this year as they drove down the field for their first score, and then again to take the lead. The offensive line was finally pass blocking, the receivers were running crisp routes and catching the ball, and Eli was getting the ball out quickly and accurately.

Then the fourth quarter happened. Had Cruz made that catch, he might still be running, and the Giants might have put the game out of reach for the Cardinals. Instead of possibly being up 21-13, the Giants lost, 25-14.

Sitting here, I just don't know what to make of this team right now. On one hand we have visible proof that the offense is improving by leaps and bounds despite missing two of it's biggest pieces in Odell Beckham and Geoff Schwartz, we have the defense coming together and delivering some crushing play.

Then on the other hand they can look utterly clueless. Dropping balls, missing assignments, losing contain, and just foolish penalties.

I suppose the Cruz play sums up the game against the Cardinals perfectly: They had the ball in their hands with the Cardinals well and truly beat ... And just let it slip away.