Instant Analysis: Five things we learned about the Giants

Share All sharing options for: Instant Analysis: Five things we learned about the Giants

What to say after the New York Giants handed away a game they should have won on Sunday afternoon against the Arizona Cardinals?  Everything was set up for the Giants to get their first victory of the season. The Cardinals were without starting quarterback Carson Palmer, along with several other injured defensive players. Arizona was traveling cross-country for an early start. The Giants were celebrating their 90th anniversary and had emotional pre-game and halftime ceremonies. The Giants even had a lead entering the fourth quarter.

They still couldn't get the job done. What did we learn Sunday afternoon? Other than the fact that right now this is a confused, down-trodden team that could be headed for an awful season? Well, here are five things we learned on Sunday.

The Giants Are Their Own Worst Enemies

The Giants have no one to blame for this loss but themselves.

"Dropped balls, punt returns, kickoff return fumbled, fumbled the ball without anybody hitting us over on the 17-yard line when we had a chance to score and go for two," said an exasperated Tom Coughlin. "The game is about points, Somehow, some way. We get no turnovers. We get nothing today out of returns.

Let me count the ways in which the Giants beat themselves on Sunday.

Those three back-to-back-to-back blunders were bad enough, and they turned a 14-13 game into another hopeless Sunday that sent fans to the exits early. They weren't, however, the Giants only problems. Here are more.

Apparently, Donnell's five-catch season-opening game was not a mirage. Donnell followed that up with a seven-catch effort on Sunday. He caught seven passes in nine targets for 81 yards, his best catch a nice 23-yard seam route. As the game wore on, it became obvious that Manning was looking for Donnell.

The Offense Did Make Progress

There were some good signs from the Giants on offense.

Manning threw two interceptions, one unfortunate and one meaningless on the Giants final possession. The Giants dropped those five passes. Manning was sacked twice. Ugliness.

There were times, however, when the Giants gave Manning a clean pocket that he took advantage of. He did complete 26-of-39 passes for 277 yards, and those numbers would look an awful lot better without the three drops from Cruz, along with one from Rueben Randle and one from Andre Williams.

The Giants put together a 13-play, 90-yard second-quarter touchdown drive. They had an eight-play, 74-yard touchdown drive in the third quarter. They outgained the Cardinals, 341 yards to 266. The Giants had the ball for 32:29 to 27: 31 for Arizona. They managed to target Cruz 10 times and Randle seven times.

The Giants did not run the ball consistently, but when they used Daniel Fells at tight end and brought in fullback Henry Hynoski they did have some success on the ground.

The Giants Did Rush The Passer

The Giants found their pass rush Sunday. They got four sacks (1.5 from Jason Pierre-Paul, one each from Johnathan Hankins and Robert Ayers and a half-sack from Mathias Kiwanuka. They put 10 other hits on Stanton - legally. We have already talked about, and shown, McClain's blunderous blast.

Pierre-Paul was dominant early in the game. He added two passes defensed, four tackles (two for loss) and two hits to his 1.5 sacks.

It seemed as the game wore on that Ayers played more and more at left end in place of Kiwanuka. The snap count data will tell us whether or not that was the case when it is released on Monday. 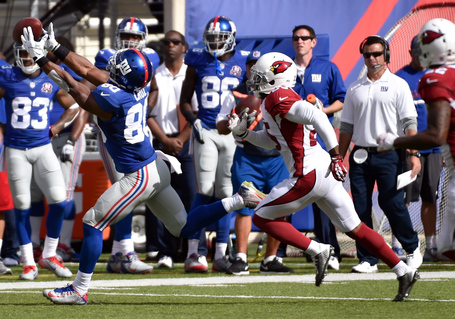 Cruz talked during the week about needing more targets after only seeing the ball come his way six times in the season opener against Detroit. He got his wish on Sunday. Unfortunately for the Giants, Cruz dropped his opportunity.

Cruz was targeted 10 times and had five catches for 60 yards, including a 27-yarder. His day, and the Giants, could, however, have been soooooo much better. He dropped three passes. One drop came early in the game, the other two were critical fourth-quarter drops.

Cruz couldn't haul in a perfectly thrown Manning pass that would have given the Giants a first down right before Ginn's 71-yard punt return. When the Giants finally got the ball back, after the Demps fumble and an Arizona field goal made the score 22-14, Manning targeted Cruz deep down the right sideline. The ball was dropped in beautifully over hte defender and Cruz had to stretch for it. He got both hands on it, but couldn't pull it in. The play would have been about a 25-yard gain for the Giants.

At least Cruz faced the music after the game and admitted his failings.

"I own up to all of my mistakes," Cruz said. "A lot of them [drops] were on third down, so that's something that we have to keep our concentration in order to move the chains and convert.