JPP talked the talk in the off-season. Did he walk the walk against the Lions?

Share All sharing options for: Friday Film Room: Has The Kraken returned?

One of the great things about the start to the regular season -- apart from that whole "FOOTBALL'S BACK!!!" thing -- is that we start to get answers to all the questions that were asked in the off-season.

For the New York Giants, one of the biggest questions was "Which JPP will show up?"

After a disappointing 2013 season that saw the Giants' best defensive player, Jason Pierre-Paul, struggle to return to form after off-season back surgery and a mid-season shoulder injury. After what was easily the worst season of JPP's four-year career, many Giants fans (and the Giants themselves) had to wonder if he could return to the All-Pro form they had come to expect from him.

Pierre-Paul spent much of his off-season rehabbing the shoulder injury and declared himself  100 percent and a "full-go" around June organized team activities.

Every time he was available to the media, Pierre-Paul was asked how he felt, and without fail he responded that he felt great and felt like he could return to his old -- interesting turn of phrase from a 25-year-old, but whatever -- form. But the questions remained, and some observers and Giants fans grew annoyed with Pierre-Paul's bravado.

[Note: Thanks to the NFL taking their sweet time getting the game up, I wasn't able to get GIFs. I really wanted to give a more thorough sampling of JPP's play, but that just gets unwieldy using stills. Hopefully that improves going forward.]

This play took place in the first quarter. We see the Lions lined up in a shotgun formation, while the Giants are lined up in the nickel. Walter Thurmond is in the slot, while Robert Ayers and Cullen Jenkins are the defensive tackles. JPP is highlighted in the black box

Move forward about a second, and JPP is engaged with the left tackle. Interestingly the Lions double Robert Ayers on the inside while leaving Jenkins and JPP with one-on-one match-ups.

JPP opens the play with a bull rush, pushing the left tackle (Riley Reiff) into the backfield.

It doesn't really show up in the still picture (I really wish I could have gotten a GIF for this play!), but JPP did an excellent job of winning the hand fight with Reiff. As Reiff set his feet to counter JPP's bull rush, he [JPP] lets off for an instant, disengages, and uses Reiff's own force to pull him past and allow for a clean rush to the QB.

At the end of the play JPP has obviously beaten Reiff and is on his way to the QB. Matthew Stafford just gets the ball out before taking a good hit, but between JPP's hand and Prince's coverage on Calvin Johnson, Megatron has to foul Prince to make the catch and the Lions get a five-yard penalty. 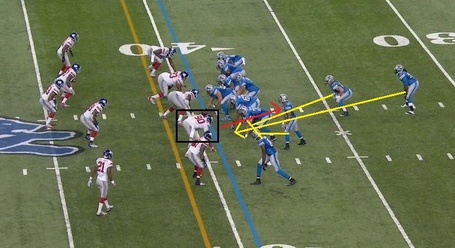 Okay, there's a lot going on at the start of this play. The Lions are in a two-back, one tight end set. The Giants are heavily stacking the box to stop the run on the second and short. The running back is supposed to run off the left tackle, while Golden Tate and the fullback are supposed to knock JPP and Stevie Brown out of the play, clearing the running lane. Let's see how that works out for them.

As so often happens in these cases, the tangle of bodies at the line of scrimmage makes it a bit tough to tell what is going on.

Tate attempted a cut block on JPP while the fullback came up to deliver the lead block. However, Tate's cut block didn't work and Pierre-Paul was able to keep his feet and flow (that's really the best word to describe it), around the fullback's block and get into the backfield. 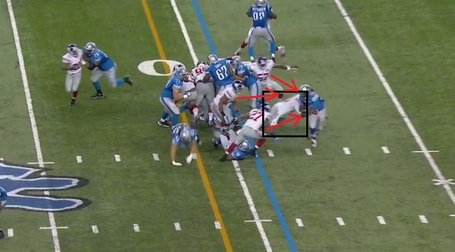 The play is basically over here. Tate is on the ground under Stevie Brown while the fullback is on the ground just past the first down marker. The running back is being wrapped up by JPP while Brown, Williams, and a defensive tackle I wasn't able to identify came in to make sure the tackle wasn't broken.

All told, JPP was responsible for a two-yard loss on the play.

That was only two plays, but they were representative of plays JPP made all night long, even after his neck stinger. Is he back? Did he answer the questions everyone had for him? I guess that is really in the eye of the beholder. Pro Football Focus credited him with three pass rushing pressures and five defensive stops, and gave him the second-highest grade of anyone on the defense.

Even if Pierre-Paul expects more from himself, which he does

JPP said the pass rush wasn't good enough on Monday night. They need to get to the QB. #NYG

I, personally, liked what I saw from him. He played with the suddenness and power we had come to expect, and also showed that rare flexibility and fluidity that set him apart from so many other defensive ends in 2011 and 2012. Hopefully that means the Giants (and Giants' fans) will get to see that player again consistently.