How the Giants and Cardinals match up.

Share All sharing options for: Giants vs. Cardinals 2014: First look at Sunday's match-up

What will the New York Giants have to do Sunday against the Arizona Cardinals to avoid an 0-2 start to their season? Let's take a look at some of Sunday's match-ups.

Can the Giants make progress from Monday night, when they gained only 197 total yards on 57 plays (3.4 yards per play)?

Manning's numbers looked awful vs. Detroit, but a deeper look at the game shows much of that was not his fault.

"I think it's just a matter of we've got to find out what we do well, what all we can handle as an offensive group, not throw more on our plate than we can eat and just go out there, make sure what we're doing we can do efficiently and do soundly to be able to make plays," quarterback Eli Manning said. "I know we're going to have to grind through some times. It's not always going to be perfect and easy. I think each game you're going to get better. Each game, things are going to come up that you're going to learn from. You might not always be ahead of the game on some things, that's just part of it, but you can still go out there and be efficient, you can make improvements, hit some big plays, do some good things."

The Cardinals feature a talented secondary that includes cornerbacks Patrick Peterson and Antonio Cromartie, along with safety Tyrann Mathieu.

The Giants, who struggled Monday night to pass protect for Manning and to open holes for running backs, have to contend with a solid Arizona front seven. The Cardinals play a 3-4 defense with a front seven led by defensive end Calias Campbell (nine sacks in 2013) and 6-foot-2, 330-pound nose tackle Dan Williams.

Veteran linebacker John Abraham (133.5 sacks in 14 seasons) has left the Cardinals due to the latest in a series of concussions. His career may be over.

When The Cardinals Have The Ball

Six days after suffering several communication breakdowns against Calvin Johnson and the rest of Detroit's talented receiving corps, the Giants' highly-regarded secondary gets a chance to atone against another top-shelf group of receivers.

"We have to be ourselves out there. A couple of the mistakes that happened out there on Monday, we just were not being ourselves. That was out of characteristic for all of us. It led to big plays," said Giants safety Stevie Brown. "If we settle in early in the game and be ourselves, then we can definitely eliminate the big plays."

Arizona has emerging star Michael Floyd, a 6-foot-3, 225-pound monster who caught 65 passes last season and five for 119 yards in Monday's season-opener vs. the San Diego Chargers, on one side. On the other side is future Hall of Famer Larry Fitzgerald. The Giants, at times, had Dominique Rodgers-Cromartie shadow Johnson all over the field on Monday. It will be interesting to see how they approach the Cardinals' duo.

The Cardinals have a trio of tight ends that include veteran pass-catchers John Carlson and Rob Housler along with rookie second-round pick Troy Niklas. 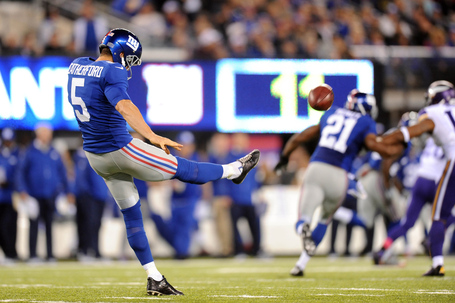 Will Steve Weatherford be able to do this on Sunday? [Joe Camporeale-USA TODAY Sports]

Can a guy with four torn ligaments in his left ankle, the foot he plants on, actually punt? That's what the Giants and punter Steve Weatherford have to figure out by Sunday. The "cut from a different cloth" Weatherford is determined to be in uniform Sunday, but is that realistic? If he isn't able to go, do the Giants sign another punter as a short-term replacement? Do they let placekicker Josh Brown, who has five career punts for a 24.8-yard average, handle that job? How does having Ryan Nassib as the holder impact Brown on extra points and field goals?

Beyond who punts, the Giants need to figure out why they had such a difficult time protecting Weatherford on Monday against the Lions. The Giants punted three times in the first quarter Monday and there were blocking breakdowns all three times. Weatherford had one punt partially blocked and was under duress on the other two, including the play on which Weatherford was injured when Jerome Couplin of the Lions was penalized for roughing the kicker.

The Giants got good work in punt return Monday from Preston Parker, who averaged 15 yards on a pair of returns.

The Cardinals feature Ted Ginn as their kickoff and punt returner. Ginn, in his eighth season, has long been one of the NFL's most dynamic return men. Playing for the Carolina Panthers last season, Ginn averaged 12.2 yards on punt returns and 23.8 yards on kickoff returns. He has six career returns for touchdowns (three punts, three kickoffs).