The Giants face the Bills in the Pro Football Hall of Fame Game Sunday night, the first preseason game of the 2014 NFL season. Here is all of your viewing, listening and betting information.

The New York Giants get to test their redesigned offense against live competition for the first time on Sunday night when they face the Buffalo Bills in the 2014 Pro Football Hall of Fame Game. Kickoff is at 8 p.m. ET at Fawcett Stadium in Canton, Oh. The game will be broadcast by NBC.

Here are all of your game details. 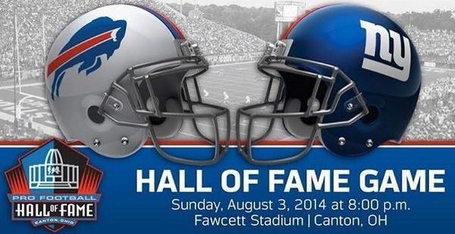 The following Giants did not make the trip to Canton, thus won't suit up Sunday night:

Justin Pugh, Ryan Nassib and Jay Bromley of the Giants all played for Buffalo coach Doug Marrone at Syracuse ... Giants linebacker Jameel McClain also played collegiately at Syracuse ... Keith Rivers, who left the Giants as a free agent after last season, is now with the Bills ... Bills tight end Scott Chandler is also a former Giant.

Stay with Big Blue View throughout the day for much more coverage leading up to kickoff.