The previous two seasons have been Jekyll and Hyde-like for Will Beatty. Following an offseason recovering from a broken leg, which Will Beatty will the Giants get in 2014?

Probably the biggest question concerning the New York Giants offense in 2014 is the play of Will Beatty. Sure there are questions about the tight ends, or the running backs, or when Eli and the wide receivers will master the timing and verbiage of the new offense and get on the same page.

But none of that will matter if the offensive line can't come together as a cohesive unit. The running backs need the line to open holes for them, Eli needs time and room to get the ball to the receivers on time and on target.

And as Giant great Chris Snee says, for that to happen the Giants need Will Beatty to return to form

In 2011 Will Beatty was an ascendant player for the New York Giants. He took over the starting left tackle job and looked like a franchise player. His season ended early thanks to an eye injury. In 2012 Beatty emerged as one of the best left tackles in the NFL. On the season he allowed three sacks, no hits, and was graded better than +10 in both pass blocking and run blocking by Pro Football Focus (one of just six offensive linemen in the whole NFL to do so).

The interior of the offensive line was injured at a truly historic rate. The center and guard positions lost roughly two seasons worth of games to injury. At the same time Will Beatty had his worst season as a professional. While he did flash the play that gave the Giants reason to give him a lucrative contract, he turned in far more games that were mediocre at best, and at times downright horrific.

And to top it all off, Beatty suffered a broken leg in the last game of the season. 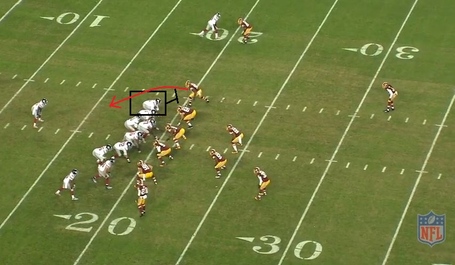 This is the Giants first game against the Washington Redskins in 2013.

In this play we see the Giants lined up in the trips formation, with three receivers to the right and a single back. Beatty is in the black box, and is matched up on Brian Orakpo. 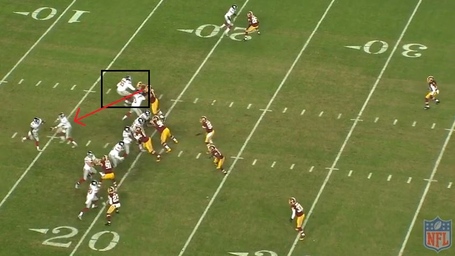 Orakpo beats Beatty pretty much right off the bat. Beatty over-extends to protect against the outside move and gets turned perpendicular to the line of scrimmage. Rather than forcing Orakpo to take the long way around, and allow himself to use his kickslide to give Eli time to complete the play-action, Beatty basically opens the door directly to the quarterback. 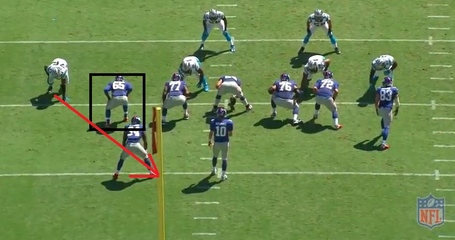 This play is against the Carolina Panthers, Week 3. The Giants are lined up in the shotgun formation, and Beatty is matched up on Greg Hardy, who is lined up wide. 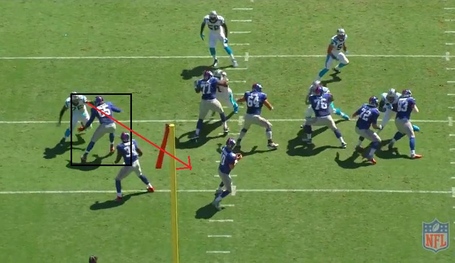 At first Hardy takes the outside move, and Beatty gets himself in not-bad position. However, rather than keeping his arms tight to his body to deliver a good punch and block Hardy, Beatty's arms go very wide. It's almost as if he was guarding Hardy on the basketball court. As a result, Hardy is able to use his length and push Beatty out of the way and take the inside rush for the sack. 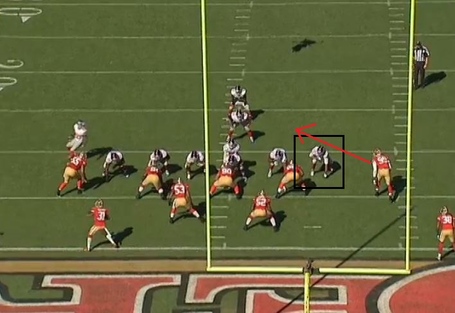 Going back to the Giants 2012 game against the 49ers, the Giants are in a two-back set with Victor Cruz going in motion across the formation just before the snap. Beatty is matched up on Aldon Smith, with San Francisco showing blitz. 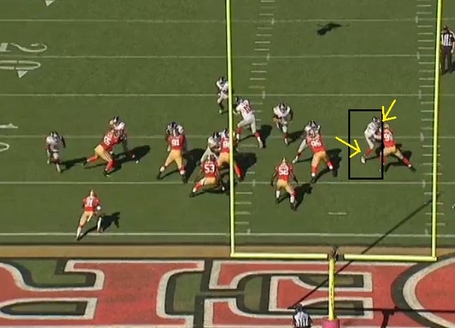 After the snap, Smith has taken the outside rush. Beatty is in perfect position in front of Smith. He is in a balanced stance, so he can mirror or defend against a bull rush. Also, his elbows are in tight to his body so he can get his hands on Smith and control him. And Beatty does control him, giving Eli enough time to complete the play action and find Cruz in the endzone for the touchdown.

Again we see the Giants in the shotgun formation. The Giants have called a seven-man protection, while the Browns are showing pressure through the B-gap with a linebacker. 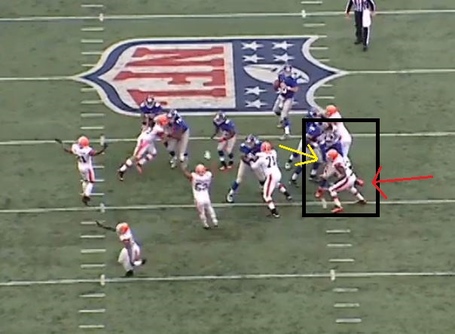 The Browns wind up not blitzing, though they do run a stunt with the right defensive end and 1-technique. It gets a bit congested, but in the black box you can see Beatty doing a great job of staying with the DE as he moves across the front. Beatty's hands are tight to control the lineman (yellow arrow) and his base is strong and balanced (red arrow). Also, he stays perfectly parallel to the line of scrimmage while the end is turned sideways. Beatty can essentially take him out of the play. Which he does as Eli throws for a long completion.

So, which Will Beatty will the Giants -- and Giants fans -- get to see in the 2014 season? Well, we all hope it is the 2012 vintage. Reports coming out of training camp are promising, and even though his reps are somewhat limited, Beatty is moving well and succeeding against the Giants' best pass rushers. That's good, because when Beatty is good, he's very good.

Beatty is set to start against the Colts in the Giants pre-season game tomorrow. When he does, he will likely be going against either Robert Mathis or Bjorn Warner. Either should provide an excellent first test for Beatty and his leg.

The Giants -- and Giants fans -- will certainly be watching closely to see how he responds.