Does anyone have a leg up in the battle for the Giants' placekicking job? It certainly doesn't seem that way.

The competition between veteran Josh Brown and rookie Brandon McManus for the New York Giants' placekicking job is turning into an extraordinary mano-a-mano duel. Everything one kicker does, the other matches. Even in warm-ups.

McManus made a 46-yard field goal Saturday night vs. the Pittsburgh Steelers. Brown matched with a 45-yard kick. Both kickers made extra points from the experimental 33-yard distance. McManus drove all three of his kickoffs either out of the end zone or deep enough for touchbacks. Brown did the same on his two kickoffs.

The numbers are nearly identical for the 35-year-old Brown and the 23-year-old McManus through two preseason games. Check this out.

Granted, two preseason games and the relatively low number of kicks is a small sample size, but it shows how even the two kickers are.

Which guy will ultimately win the job?

"They're both competing and have really strong legs. They both have pretty good accuracy at this point. It'll be interesting to see how it all plays out," special teams coordinator Tom Quinn said last week. "You value a kicker who can make the kicks. You try to put the young kicker in some situations and try to test him. The thing about Josh [Brown] is that he does have a strong leg. A lot of times, you have an old kicker and a young kicker and the young kicker has such a strong leg. But Brandon [McManus] will really have to beat him out in all areas to win the job and he knows that."

Quinn's remark makes it sound more like Brown's job to lose than it is McManus's job to win, but that is simply an educated guess.

Whatever happens, it certainly is one of the most intriguing battles of the preseason for the Giants. 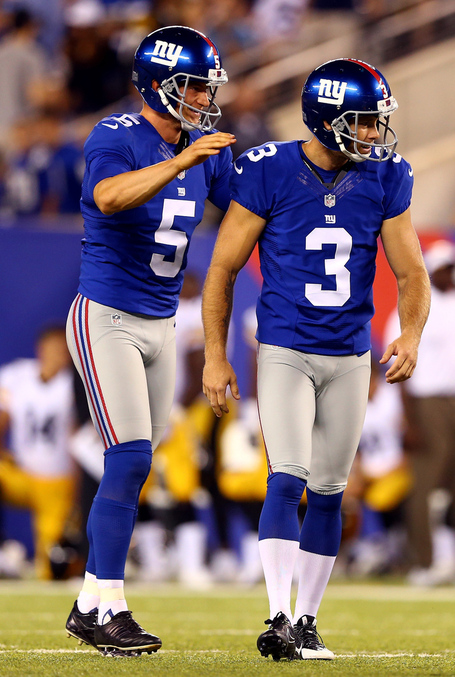