Panic time! OMG, the Giants aren't perfect on offense yet!

The Giants' new offense is a work in progress, and the fans are impatient.

Share All sharing options for: Panic time! OMG, the Giants aren't perfect on offense yet!

The New York Giants have played two preseason games. In that time quarterback Eli Manning has played seven series, and the results have been largely unimpressive.

There was a run-heavy 12-play, 80-yard drive vs. the Buffalo Bills second unit, and there was a quick-strike 73-yard touchdown run by Rashad Jennings Saturday night vs. the Pittsburgh Steelers. The other fives series. Largely regrettable. Filled with 3 and outs, a fumble, a couple of sacks, penalties, mis-communications with receivers. You name it. Pretty much those five series can be summed by simply calling them bad offensive football.

The result of those five unsatisfying possessions? There is panic in the fan base. Now that people have seen the new Giants' offense under the direction of first-time coordinator Ben McAdoo, the 'McAttack' if you will, the honeymoon appears to be over. In an instant gratification world, where people want results now, there is much angst. Even though, of course, the games don't count for another month.

Witness some of the commentary here at Big Blue View Saturday night and Sunday morning. The use by the Giants of a couple of shotgun draws on third-and-an-eternity even brought mention of the thought to be verboten 'Gil-word.' 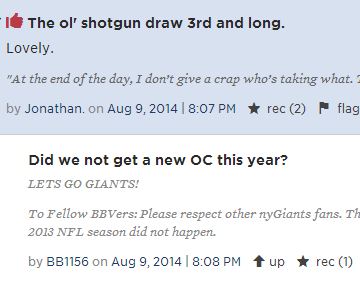 [NOTE: Click on the last two images to enlarge the text]

You get the drift. Panic! All is lost! The offense is still 'broken'! Dump Eli and draft a new franchise quarterback! Fire McAdoo! Bring back Gil ...! Wait, now I'm going too far.

Time for a word of advice. Relax! For months you have been advised to have patience. You have been warned that it would take time for the new offense to come together. That it would take time for the new staff and multitude of new players to gel into a cohesive unit. Did you somehow expect to see the Giants morph into 'The Greatest Show on Turf' right from the first snap of the preseason? Hate to burst your bubble, but it doesn't work that way.

The development of this new offense is a process that will take time. Again and again we have told you that the massive changes (personnel and playbook-wise) the Giants are implementing are difficult to pull off. In these first two games you are seeing the admittedly very tentative first baby steps. Think of a child and its crawl-walk-run progression. Right now, the Giants haven't yet mastered crawling on a consistent basis. They will, but it is going to take time. Shoot, they haven't even installed the entire playbook yet.

'There's some good and some bad, that goes with everything. Hopefully we're moving in the right direction towards putting together more good.' - Tom Coughlin

Think about the days of the Diehl-Seubert-O'Hara-Snee-McKenzie offensive line. Remember that the reason they were tremendous wasn't individual talent -- it was cohesion. They were smart and they played together for years. They also played at a time when the offseason program was 14 weeks instead of nine and when teams could practice twice a day during training camp. The current Giants' offensive group hasn't really even been together at all yet, considering that Will Beatty hasn't played and Odell Beckham has practiced once during training camp.

Think about when Steve Spagnuolo was a rookie defensive coordinator during the 2007 Super Bowl season. That defense looked like a sieve through two regular-season games, surrendering 80 points. Thing worked out OK.

Giants' coach Tom Coughlin has talked since the beginning about making 'small gains' in the development of the offense. He insists that he is seeing them.

"I'm seeing some individual development. Some of the offensive linemen are starting to play a little bit better," Coughlin said. "We certainly think that Rashad Jennings and at this point in time Andre Williams are improving. From time to time you'll see a play made by certain individuals. ... There are some things out there that are definitely improvements.

"It's not all where it is obviously. There's some good and some bad, that goes with everything. Hopefully we're moving in the right direction towards putting together more good."

Coughlin, of course, wants to see the Giants go from those momentary flashes to playing consistent offense.

"That's what we're trying to do is put consistency together," Coughlin said. "You struggle some and you've gotta work your way through it. That's why you play the preseason games."

Remember people, this is preseason. Look for positives. Don't expect perfection. Don't obsess about play calls, at this point they aren't necessarily being made with winning in mind. Most all, have patience. This is a long process, and the Giants are just at the beginning of it.