Eli Manning had his worst year as a pro in 2013, but what went wrong with him?

2013 was a horrible year for the New York Giants offense. Their very first play of the year was an interception on a failed screen pass. That pretty much set the tone for the next 17 weeks.

Over the course of the season every part of the offense broke down and failed. The interior offensive line lost more than 30 games to injury, the Giants were forced to start six different running backs, there was a serious problem with miss-communication between the wide receivers and the quarterback.

Eli Manning was under siege like never before, could never be sure if his receivers would be where he thought they would be, and had no running game to rely on. As a result of being sacked more than ever before, often having the pocket collapse, and being forced to rush throws,

You are what you do repeatedly. That is one of the things practice does for you: It reinforces movement patterns so you can perform them more efficiently. Good habits happen when you repeatedly perform motions correctly, and bad habits are what happens when you perform incorrect motions.

And as Eli as hit and forced to rush throws while under duress all season long, his mechanics eroded.

There isn't enough time to really get into *why* Eli's mechanics deteriorated over the season, but as it happens we have just enough time to get through *what* happened, and what the future might be.

Throwing a ball is not an easy thing. Sure, anyone can go outside and play catch, but to play at the level of an NFL quarterback there are a lot of little things that have to happen, and happen in the correct sequence.

Every thing from footwork in his drop to weight transfer to torque generation, to elbow and wrist angle needs to be not only correct, but correct at the correct time.

This pass took place in the last quarter of the season, after 24 pre-, regular-, and post-season games, a hellish beating in a mud bog against San Francisco, and three quarters in the Super Bowl.

When you're done basking in the memories, we can take a closer look at what went so right.

As you can see this play starts off with the Giants in the shotgun. Nicks and Cruz are on the right, Mario Manningham is on the left.

What you don't see in either the gifs or the stills is that Baas delivers a low snap, but Eli is able to corral it, and drops back (and then moves around the pocket) with quick, efficient steps. 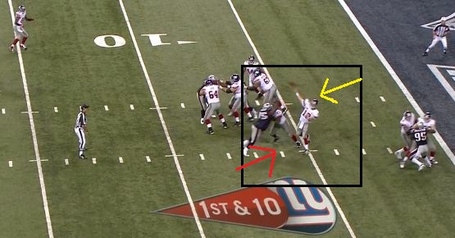 Okay, from here I want to take a look at a couple things. First, Eli's weight is completely on his left (front) foot. Next, Eli's shoulders and hips are square to his target (Manningham sprinting down the left sideline), and his arm is fully extended. All of this, plus a few smaller things, means that Eli is able to generate power with his entire body, and efficiently drive the ball (accurately) down the field.

We'll start with Eli's first completion of the 2013 season. 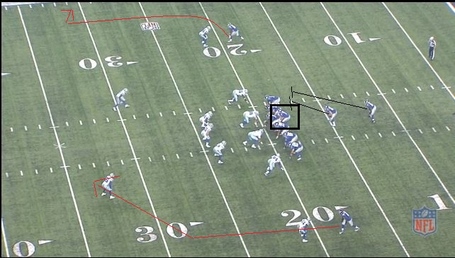 There isn't a whole lot going on with this play. Eli is under center in a Power I formation. This is a two-man route with a 7-man protection. Cruz is on the right with the comeback route that ends just past the first-down marker, Nicks is on the left with the slant.

(Well, it's either a slant with a longer stem than normal, or a post route with a shorter stem, but NFL.com listed it as a "Slant Pattern", so that's what I'm going with) 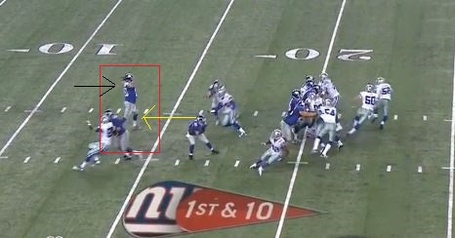 For this play the offensive line gives Eli plenty of time and a clean pocket for the throw. As you can see, his weight is transferred to his front foot (yellow arrow), his hips and shoulders are square to his target (Nicks breaking toward the middle of the field), and his arm angle is good (black arrow).

The ball is right on target and hits Nicks mid-stride and gets turned into a 57 yard gain.

(Note: The following play was picked mostly at random. I mostly wanted to see Eli against (roughly) the same defense as the first play) 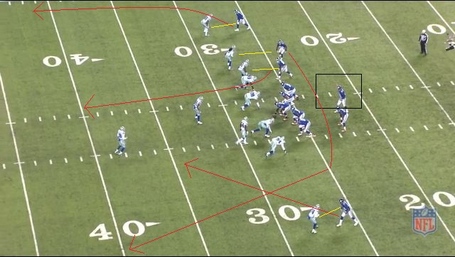 There is a lot more going on here than in the previous play. For starters the Giants are in the shotgun with Randle and Nicks on the outside. Cruz is in the right slot and just before the snap Jernigan goes in motion from the right side to the left slot. 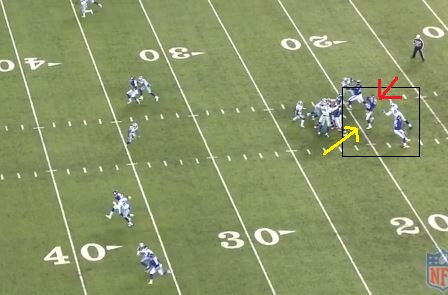 Exactly what is going on is a bit difficult to see from this angle.

Eli is rushing this throw to Jernigan on the fade route, likely because of the pressure coming off the edge. He is square to his target, but hasn't fully stepped into the throw, and his arm hasn't come through yet. Eli overthrows Jernigan, who has a step on the DB by  that point, so there is no damage done beyond the incompletion.

This isn't as bad as things get by the end of the season, but it is clear that Eli's mechanics have deteriorated from the beginning of the season and he is much more sensitive to pressure than he usually is.

So, can Eli be fixed? Offensive coordinator Ben McAdoo has a reputation as detail-oriented and a stickler for the fundamentals. However with an offense predicated on quick reads and a quick, accurate release, can Eli do it?

The video trickling out of training camp could give some clue about Manning's progress. 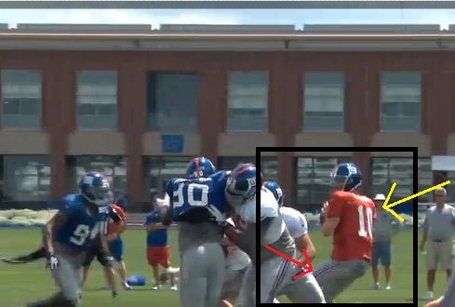 This is the first clip where we've been able to get a decent look at Eli just before the throw. What you can't see is that Eli's footwork is quick and efficient, stepping up into the pocket. His shoulders and hips are in line and parallel to the target (Cruz on a slant). He is in a balanced, athletic stance with his weight primed to transfer forward. Also, he is holding the ball at (roughly) a 45-degree angle to his body. According to QB coaches, cocking the ball in that matter limits unwanted joint movement and presets the wrist for a tight spiral. 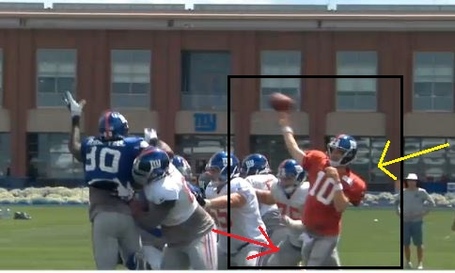 As Eli releases the throw you can clearly see that his weight is fully transferred, his hips and shoulders are square to his target, and his arm is fully extended. This pass is delivered accurately and with some nice zip, hitting Cruz in stride, who is able to turn up-field and get some yards after catch.

Before the 2011 season Eli Manning was asked if he sees himself in the same class of quarterback as Tom Brady. He famously replied that yeah, he's believes he is an elite quarterback. The media at large openly laughed at Eli's self assessment, but Eli backed it up by setting the league record for fourth-quarter touchdowns and leading game-winning drive after game-winning drive. To top it off, he bested Brady in the Super Bowl and completed 75 percent of his passes.

Interceptions and turnovers aside (and that is a big thing to put aside), Eli started out the 2013 season strongly. He was pacing his brother in terms of yards and touchdowns. However as the offense disintegrated, Eli's mechanics eroded as well. By the end of the season, the only thing similar to the Super Bowl MVP was the jersey number.

Add that to a Week 17 ankle injury and off-season surgery, many have worried if Eli Manning could be rehabilitated.

The video and reports coming out of Giants training camp are promising. Eli's recovery has been quick and he hasn't missed any time. From what little we've been able to see, his mechanics look much more like what we expect to see from a two-time Super Bowl MVP.

Without being reduced to an Allen Iverson quote, we are just talking about practice for now. We won't be able to get a good idea of where Eli is until the bodies start flying in game action. That being said, early indications are promising.