Damontre Moore says he learned from a disappointing rookie season.

The play that got New York Giants fans truly excited about the potential of then-rookie Damontre Moore came in the Giants' first preseason game of the 2013 season against the Pittsburgh Steelers. The incredibly athletic third-round pick broke through the line of scrimmage, launched himself through the air and blocked a punt.

For Moore, the play turned out to be the best of times and the worst of times. Yes, he blocked the punt. Yes, he changed field position. Yes, he fired up the fan base and got himself noticed. He also landed awkwardly on his left shoulder, causing an injury that cost him valuable practice and game time, stuck with him the entire season and ended up forcing him to have offseason surgery to repair the damage to his labrum.

"Honestly it was an injury that I did to myself by doing the improper technique, so if I were to have become more of a student of the game and knew how I was supposed to do things and what techniques I was supposed to use I could prevent some of those injuries," Moore said.

"The end result of that play and that bad technique was I got injured and I didn't score. If I had done it with the proper technique ... Oakland Raiders game, blocked it, Cooper Taylor was right there behind me to pick it up, scoop and score. It's one of those things that just comes with time and maturity. You learn."

'I thought I was going to come in and play, but it was a rude awakening. Things didn’t happen like that, but it also became one of the best things.' - Damontre Moore

The injury began a season that Moore admitted was a "humbling experience." After starring for three seasons at Texas A&M during which he compiled 26.5 sacks and was an All-American in 2012 Moore said that he didn't think his rookie season was going to be so difficult.

"That’s what the team brought you in here for. They saw what you did in college and they were impressed and they thought that you could be an asset to the team. Especially in this day and age at this level nobody’s bringing somebody in just to take up space, they’re bringing somebody in because they have some assets or attributes that they want to use," Moore said.

"I thought I was going to come in and play, but it was a rude awakening. Things didn’t happen like that, but it also became one of the best things. I ended up becoming a lot more humble, a lot hungrier for the game. It brought me back to why I love this game and the feelings I love to experience."

Let's be honest. Part of what happened to Moore is that he entered the league as a 20-year-old kid who had some growing up to do and really didn't know what the NFL was about.

A year later, Moore is still a fun-loving 21-year-old kid. You see that when he challenges Walter Thurmond and a group of defensive linemen including Jason Pierre-Paul to a 30-yard sprint -- and wins it going away. You see it when he bounces around the locker room talking to, and messing with, anyone he can. You see it when he shows up for interviews wearing socks showing 'SpongeBob' and other fictional characters. 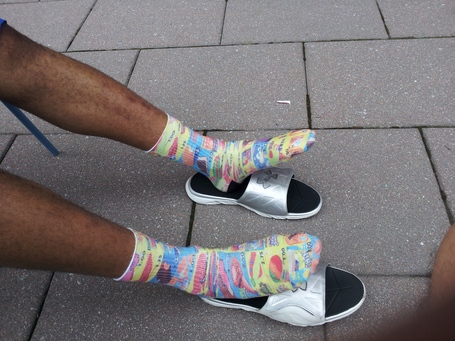 There is, however, something about Moore this season that wasn't there a year ago. There is a maturity, an understanding that the NFL is a business and he has to work diligently at his craft that perhaps had not developed a year ago.

Moore's growth began when he accepted the idea that he needed to study, work on his body and find ways to get better. 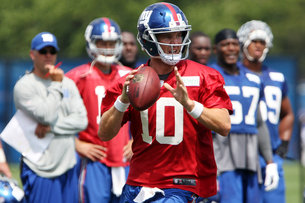 Complete news and analysis of the Giants 2014 training camp.

Moore started his journey to improvement by having his shoulder surgery. By the way, what exactly was wrong with the shoulder?

"I don't know," Moore said with a shrug. "They were in there explaining what it was, talkin' doctor lingo, and they were just like ‘got to cut you open' and I was like ‘alright, whatever makes it better.' "

When he had healed sufficiently, Moore hit the weight room and added several pounds of muscle. Listed at 250 pounds a year ago, Moore said he now weighs anywhere from 255 to 260 pounds.

Moore did one other critical thing -- he asked for help. His coaches, Jessie Armstead, Michael Strahan -- anybody he thought he could learn from. Their advice? It came back to what Moore talked about earlier, becoming a better student of the game.

"Honestly, that's all I did. I had nothing but time on my hands, being up here. Most of the guys were gone so whenever I was missing football or if I had free time I would just go watch some film."

The work has apparently paid off. Early in camp Moore has been rushing the passer well. He has also impressed his teammates in other ways.

"His athleticism is hard to compare," defensive tackle Cullen Jenkins said recently. "But from where he was last year, technique-wise and some of the things he was doing to how he's come back in this training camp. It's been amazing how he's setting the edge in the run game. How he's transitioning to the pass, working on some of the techniques that he didn't have last year. He's really working hard and he's really improving."

When the Giants drafted Moore a year ago they hoped he would become their next great defensive end. Many of those great defensive ends did not make huge impacts as rookies. Michael Strahan, Osi Umenyiora and Justin Tuck all had just one sack in their rookie years, and Jason Pierre-Paul had 4.5. Point being, there is plenty of precedent for Giants' defensive ends to start slowly and go on to have outstanding careers.

Will Moore be next? We have no way of knowing that. We do know, however, that Moore has learned that it isn't going to happen unless he works for it. That, of course, is the first step.