Josh Brown had a terrific 2013 season. He made 23-of-26 field goals (88.5 percent), including a franchise record 17 straight. His kickoffs were solid. The Giants rewarded the 35-year-old with a two-year contract. Oh, and serious competition for his job.

The presence of Brandon McManus, who kicked in college at Temple, on the roster might have been a head-scratcher in the Spring. Was he just on the roster to save Brown, entering his 12th season, from wearing out by kicking too much? Surely the Giants weren't seriously considering replacing Brown after the excellent work he did in 2013. Were they?

Back in June special teams coordinator Tom Quinn insisted that the 23-year-old McManus, who was in camp with the Indianapolis Colts a season ago, had a chance to win the job.

"I think everything is a competition. I really like McManus, I liked him coming out. He went to Indy for last training camp and preseason and I thought he was really a good kicker coming out of Temple," Quinn said. "He's kicked in the northeast at a high level, he did all three so I think he's got a real big upside once it all starts clicking for him." 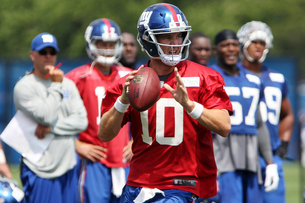 Follow all of the news and analysis from Giants training camp on our Training Camp Hub Page.

McManus has made all eight of his field-goal attempts thus far during training camp, and has shown the ability to drive the ball deep, evidenced by his comments on Sunday about making a 75-yard field goal while training a few weeks ago.

"It's good to have strong legs competing against each other," head coach Tom Coughlin said on Monday. "That's good work there."

So, yes, the competition appears to be on. It features the classic match-up. Veteran vs. rookie. Proven player vs. talented young stud looking for his chance. If you want an interesting dynamic, the two combatants stood just a few feet away from each other Sunday conducting interviews with crowds of reporters around them. One defending why he should keep his job. The other offering evidence of why he belongs in the NFL.

There is the solid, dependable, proud and still talented veteran in Brown, who is entering his 12th season, trying to protect his job.

"I had a great year last year and I come into this camp with a tremendous amount of confidence. I have no reason to believe that they would want to replace me," Brown said on Sunday. "My goal is not to give them one."

There is the young McManus, who made a 50-yard field goal in his only attempt last preseason for Indianapolis but still got released. Truth is, the Colts have Adam Vinatieri and that is a job McManus was never going to win regardless of what he did.

"I think no matter what you are always auditioning for 31 other jobs. People are watching your films every day," McManus said. "I know my capabilities and obviously I kick here with Josh every day and we're battling hard against each other. I feel like even if one of us doesn't make it we'll open up other teams' eyes. The kicking position always is kind of a revolving door."

While McManus has been impressive, Brown is also kicking the ball well. In two separate sessions Sunday, Brown made 9-of-10, including a couple from right around 50 yards.

"You have to keep that chip. Don't think that it's not there. You're not over here hugging each other but you can't lose yourself in this. There are things more important than football," said Brown when asked about his relationship with McManus. "There's no Tonya Hardings going on out here. It is being cordial but there is an understanding that you're trying to take something and I have three kids you're trying to take it from, too. That's personal. But that's not his fault he's here. He's good and they chose to bring him in. It's up to me to be efficient and apply the pressure to him personally."

Corey Washington Hoping To Catch On 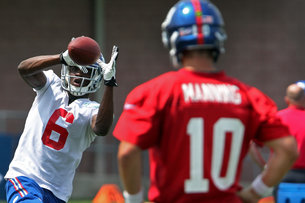 Brown sees the talent in McManus, saying "there's a lot there."

"He's got the same attitude that I did when I came in," Brown said. "He resembles a lot of me. Very, very powerful. What I carry above him is my wisdom and game experience. I've missed one game winner in 12 years, and I'll take that.

"At the end of the day the Giants want to know peace of mind. They want to know when they send me on the field the job's going to get accomplished. Almost 90 percent of the time I did that last year. I think I did a good job of campaigning for myself, but it's year-to-year."

Brown may not have the range he once had but said he is still comfortable from 52 to 53 yards and "I'm still making 57, 58-yard field goals."

When it comes to game-winning kicks, McManus obviously has yet to be tested at the professional level. He said he went 4-for-4 in that department while at Temple.

"I love the game-winning kicks," McManus said. "The ability to thrive under pressure really proves who you are."

Which kicker will end up with the job? That has suddenly become one of the more interesting questions of the Giants preseason.