A look at players who have had rough starts to training camp for the Giants.

Share All sharing options for: Giants' Training Camp 2014: These guys are falling

Earlier today, we discussed early risers who have impressed during the first few days of New York Giants training camp. Well, there is always a flip side. So, now we turn our attention to players who are falling. It's early, and there is time for these guys to get things turned around, but they have work to do.

Odell Beckham Jr. -- It hasn't exactly been a case of 'he's fallen and he can't get back up' when it comes to the Giants' 2014 first-round draft pick. More like 'he's hurt -- AGAIN -- and he can't get on the field.' Beckham looks nice with his hair dyed blond down the middle, but the Giants did not draft him 12th to smile pretty during interviews and look good standing around in shorts. They drafted him 12th to make an impact, now, and past history with young players around the Giants shows that every practice missed makes it less and less likely that Beckham will be able to do that. The more practices he misses the longer it will take for him to establish a role in the Giants offense, and the bigger a problem it becomes. Without Beckham, the Giants have only Victor Cruz, Reuben Randle and Jerrel Jernigan as receivers they can really count on. The fact that they don't have an established pass-catching tight end makes it worse. 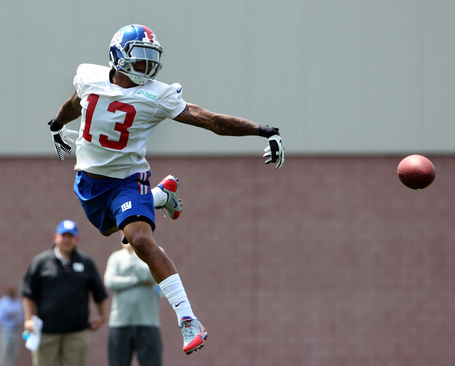 Trindon Holliday -- There was some excitement during offseason practices about the idea of using Holliday as a receiver. The more the Giants use him there during training camp, though, the more Holliday gets exposed and you see why he caught only two passes for the Denver Broncos the last two seasons. Holliday is only 5-feet-5, and the only pass you can consistently throw to him is a bubble screen. When quarterbacks have managed to find him down field, even on short routes, Holliday has had trouble catching the ball. Making matters worse for Holliday is the fact that Quintin Demps appears to be the kickoff returner, meaning the only real role for him appears to be returning punts. Can the Giants keep a guy on the roster whose only job is to return punts, especially if they have to keep a third quarterback again this season? To be honest, I'm not really sure how.

These players have impressed during the first few days of training camp.

Ryan Nassib -- To put this candidly, the second-year quarterback must really have a soft spot for Curtis Painter. Nassib is once again playing like a guy who is going to force the Giants to keep three quarterbacks, meaning the veteran Painter would get to keep his job. It has been obvious since the spring that the Giants want Nassib to be the second quarterback, which would really enable them to carry two and save a roster spot. It's also been obvious  if they handed the No. 2 job to Nassib as of today that would be a HUGE risk. Nassib is all over the lot, and his inconsistency and inaccuracy have to be troubling. The Giants will continue to give Nassib chances, but as of now Nassib has not been impressive.

Robert Ayers -- When the Giants let Justin Tuck go in free agency, they signed the former Denver Broncos defensive end as a replacement. All through the spring I waited to see Ayers step forward and claim the job. It didn't happen. Same thing thus far in training camp. Damontre Moore has looked fantastic in shorts, something that is seemingly becoming an annual event. Mathias Kiwanuka, coming off a poor season, is starting opposite Jason Pierre-Paul, and playing with a determination and a spring in his step that didn't seem to be there a season ago. Ayers? He hasn't seemed to do anything wrong. Problem is, he really hasn't been seen doing much at all.

Mark Herzlich -- This one goes back to mini-camp when Tom Coughlin listed middle linebacker options to replace the injured Jon Beason, and did not include Herzlich. That still appears to be the case. In the Giants' linebacker pecking order, Herzlich appears to be No. 6, which is probably exactly how many linebackers make the roster. Let's see if Dan Fox, Justin Anderson or Terrell Manning can jump up and take that spot from Herzlich.

Spencer Paysinger -- This is one I'm not sure I understand, which is something I know I have written previously. Rookie Devon Kennard is making a big splash, and the Giants seem determined to make Jacquian Williams a full-time player at the weak-side linebacker spot. The result is that there seems to be no real place in the rotation for Paysinger, a solid -- albeit unspectacular -- player.

The more I watch the Giants, and the more I see Beckham sidelined, Mario Manningham not look like a guy who can be a productive wide receiver, and the Giants continue to search for somebody who can be a consistent presence at tight end the more I worry about the Giants' passing attack. The problem might not be Eli Manning and his adjustment to the new offensive scheme, the problem right now is that he doesn't seem to have enough guys to throw the ball to. Beckham, and unearthing a reliable tight end, are keys to solving that.

Did I leave anybody off this list? Is anybody on there you think doesn't belong? Let us know.