Giants' 2014 Training Camp: Who are the early risers?

Which players have been impressive during training camp thus far?

Share All sharing options for: Giants' 2014 Training Camp: Who are the early risers?

Saturday is a day of rest for New York Giants' players, who get a day off from training camp before taking the field on Sunday in full pads for the first time. It is a good time to take stock of what has happened in the first four practices. Let's do that by looking at some of the camp "risers," players who have been impressive in the early going.

The "Pocket Rocket" hasn't done anything extraordinary during the first four days of practice, but after an offseason during which at one time his career was thought to be in jeopardy the fact that he has practiced all four days might be extraordinary in itself. Wilson took a hit from Cooper Taylor on Friday with no adverse affects, and has caught the ball well. He looks like he will be a valuable part of the Giants' running back rotation.

"He's got the burst, the excitement; he can take the ball to the edge and do a good job," said running backs coach Craig Johnson. "I think what he is, you have a couple, three or four, bigger backs on our roster and you have that quick back that can be a difference-maker so that hopefully is how we will get him on the field and show his skills." 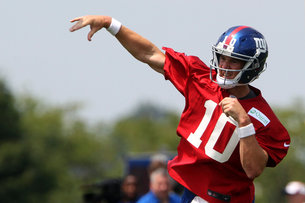 Williams' production as a senior at Boston College as a senior (an astounding 355 carries for 2,177 yards) was plain to see. What wasn't really clear was whether or not Williams was just a big, strong, straight-ahead plow-horse of a running back or something more. He has been showing the Giants he is something more.

Williams has shown the Giants some ability to run both inside and out and a burst getting through the hole. In early practices the Giants used Williams extensively as their goal line back, and they are continuing to look for signs that his pass-catching and pass-blocking skills are developing.

Much like Wilson, the most impressive thing in regards to Beatty is simply that the left tackle has been on the field since the first day of training camp. After breaking his leg in the final 2013 regular-season game Beatty was expected to participate during camp, but maybe not from the beginning. The amount of work he has already done is a pleasant surprise, and a bonus for him after what was a disappointing 2013 season. Offensive line coach Pat Flaherty insisted this week that Beatty is better than the overmatched player he looked like last season, saying "he's not that player."

Flaherty has been happy with Beatty thus far.

"Anytime you're at work playing football and putting the pads on, you're going to get better," Flaherty said. "The thing that we don't want to happen is regress with his rehab. He's handling both things pretty well, as expected."

The Giants' second-round pick is working at the backup center to J.D. Walton and is in the mix at right guard with Brandon Mosley and John Jerry. Right now, Richburg doesn't appear likely to be the starter at either spot but he is showing the ability to play both spots and getting a ton of reps during practice.

"If and when in fact Weston continues to develop, he's going to be a good offensive lineman ... but he's got to get in there and grow into that position," said offensive line coach Pat Flaherty. "There's a sense of urgency about being able to grow into a position, and the only way you're going to be able to do that is if you have an opportunity to continue to play and we all have gone through growing experiences that aren't so good. You just have to learn from them."

Donnell is listed as the first-team tight end on the Giants' unofficial depth chart. Somebody has to be, but it is something for the third-year player from Grambling who came to the Giants as an undrafted free agent. The advantage Donnell has over Adrien Robinson is that while Robinson battled injuries and missed practice time a season ago, Donnell was able to get valuable practice reps every day. Yes, the system was different. Live reps are important, though, no matter what the system.

These Giants Are Falling! Can They Get Up?

A look at players who have not been impressive the first few days of training camp for the Giants.

These Giants Are Falling! Can They Get Up?

Kennard impressed during the spring, earning first-team reps at strong-side linebacker and also reps as a backup at middle linebacker ahead of veteran Mark Herzlich. That has continued in training camp. Kennard was a fifth-round pick in the draft, a player linebackers coach Jim Herrmann said "kind of got lost in the college shuffle a little bit there" because of constantly changing positions at USC. If Kennard con continue to impress once the games start the way he has in early practices the Giants might have found themselves a late-round gem.

Moore has been one of the stars of the first few days of training camp, flashing on numerous occasions with what would have been sacks in game conditions. The Giants need pass-rushing from someone other than Jason Pierre-Paul, and the second-year defensive end could develop into one of the answers. As a cautionary note, though, remember that Moore was also being raved about by defensive coaches at this time last season. He needs to stay healthy, he needs to show he can make plays in pads and not just in shorts, and he needs to be able to do it against the front-line players and not just the second- and third-team linemen. Those are things he did not do a year ago, and it is what the Giants are hoping to see for the rest of training camp and the preseason.

During the spring special teams coordinator Tom Quinn praised the rookie placekicker from Temple and indicated that he had a chance to unseat veteran incumbent Josh Brown.

"I really like McManus, I liked him coming out. He went to Indy for last training camp and preseason and I thought he was really a good kicker coming out of Temple," Quinn said. "He's kicked in the northeast at a high level, he did all three so I think he's got a real big upside once it all starts clicking for him."

To be honest, I didn't really buy that there was a legitimate competition for the place-kicking job. Maybe, though, just maybe McManus is making it a real competition. He has gone 8-for-8 in field goals ranging from 20 yards to the mid 40s, and has shown a booming leg, with his kicks often soaring high into the air. Brown had an excellent 2013 season, is a quality NFL kicker, and his experience still makes him the odds-on favorite. McManus, however, is showing that he does have ability.

As I look back over the list, one of the great things is that almost all of the players mentioned are young guys, an area where the Giants have drawn criticism. Maybe that has a chance to change. Who did I leave off the list? Do you think any of the guys I mentioned don't really belong? A little bit later today we will also look at "fallers" in the early portion of camp, and try to get to some position battles or positional reviews. So, stick around. Just because the Giants aren't practicing -- and it's Saturday -- doesn't mean there won't be plenty to read and discuss.