He hasn't seen the field much yet, but what can the Giants' 2014 first round pick bring to the offense?

The offense the Giants will run in 2014 is different from the offense they have run since Kevin Gilbride took over as offensive coordinator prior to the 2007 season. I know I'm stating the obvious, but it also needs to be stated.

Yes, football is football, but the way it's done varies wildly from one philosophy to the next.

Where Kevin Gilbride's offense featured a deliberate tempo and a tendency toward deep passes, Ben McAdoo's offense features a brisk tempo -- so far averaging a tic over a snap every 24 seconds in the hurry-up -- and quick hitting passes.

The deep passes Eli Manning has won two Superbowls with aren't going the way of the dodo, however many of the corner, post, and fade routes will give way to slant, curl, and comeback routes. Routes that quickly get the ball out of the quarterback's hand, and into the hands of play makers in space.

Leading up to and after the 2014 NFL Draft, Odell Beckham was generating buzz as the best route runner in the draft. Unlike many of the other top receivers in the draft, Beckham played in a true pro-style offense at LSU, and runs a "complete" route tree.

And as he deals with a nagging hamstring injury his experience running routes, not his rare blend of speed, quickness, agility, and lower body explosiveness (not to mention a pair of massive mitts), has become his most important trait.

So with that and the new offense's emphasis on running quick, precise routes in mind, let's go to the tape and see what Beckham will bring when he gets on the field.

I've mentioned the route tree and several specific routes so far, and I am going to be breaking this up by route.

This is a basic representation of a wide receiver's route tree. 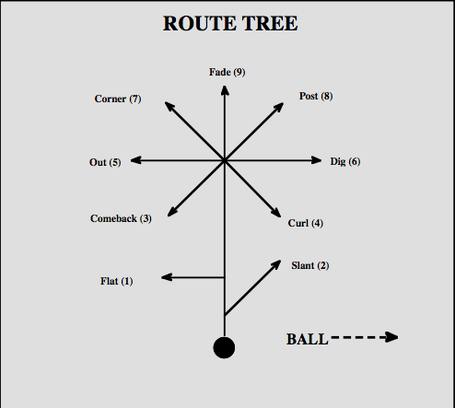 At LSU Beckham caught the ball an average of nearly 14 yards down field, more than any top receiver other than Mike Evans. His speed, hands, and catch radius combined with Zach Mettenberger's arm strength made Beckham a dangerous deep threat.

However for this we'll be focusing on Beckham's quicker routes.

Anyone who has watched the Giants defense the last couple years knows the slant route well. It is that quick hitting route that attacks soft spots in underneath coverage. It gets the ball out of the quarterback's hand before the pass rush has a chance to get there. Done correctly, the slant route is a very safe play that can net a very nice gain.

This is a quick slant route and Beckham takes full advantage of the off-man coverage. At the top of the 3 yard "stem" of the route, Beckham freezes the corner with a quick stutter step, then sharply breaks his route in toward the middle of the field.

This is a pretty simple routes, but Beckham does the little things well: His break is very sharp, creating enough separation to pick up a nice chunk of yards after the catch. He reaches out to snag the ball out of the air, rather than trying to dive or double-catching the ball. And finally, he finishes the run after the catch by picking up an extra yard or two.

The comeback was Beckham's best route in college, accounting for better than 35% of his receptions his senior year at LSU

The comeback route looks like it is going to be a deep route when the receiver suddenly breaks back toward the quarterback for the ball. Done correctly this route is difficult to defend against, and if the coverage is soft an agile receiver can break off a nice run at the end.

This time we see the corner giving (about) a 7 yard cushion in off-man coverage. The defense is obviously respecting Beckham's speed and Mettenberger's arm strength. However Beckham shows off his agility, sticking his foot in the ground and coming back to the ball. Beckham's cut is so sharp that the corner slips, which Beckham takes advantage of to turn up field for more yards.

Once again he does a lot of small things well: His sharp cut after selling the deep route, catching the ball with his hands and securing it before turning up field to get a run after the catch.

On this play you see Texas A&M giving the LSU receivers a huge cushion. However on a 3rd & 16, with LSU backed up on their own goal line, that isn't a bad call. They are defending the 1st down marker and are willing to give up a reception as long as it's short of the reception.

Once again Beckham makes a very sharp cut to get back to the ball and create separation between himself and the defender. Once again Beckham does a great job of snatching the ball out of the air with his hands. He also he shows his field awareness by staying in bounds and making sure he picks up the first down.

The out route is a chain mover. Generally a quick route, as its name suggests, it breaks out toward the sideline. It accepts a modest gain to keep the offense on schedule while also allowing the quarterback to put the ball where only his receiver can get it.

Here we see Beckham going up against Jason Verrett, one of the best cover corners in college football last year. Verrett gives Beckham a cushion, but he generally has the quickness to recover and defend the pass.

Here, Beckham once again makes his cut sharply toward the sideline. He also works back to the ball slightly, keeping himself between Verrett and the ball. Finally he goes up and catches the ball at its highest point.

This route is designed to take advantage of a void in the middle of the defense. Generally these either happen when the defense blitzes or if the offense forces one route combinations.

In this play we see the defense blitzing. The blitz creates an opening over the middle for Beckham to take advantage of. This is a very quick hitting play, but Beckham still manages to use a quick shoulder shake to freeze the defensive back for just enough time to break over the middle and catch the ball.

This play only goes for roughly five yards, but with the defense getting a free blitzer, that is plenty.

It is frustrating to see the Giants running a new offense for the first time in almost a decade, but look on the sideline to see their first round pick wide receiver standing on the sidelines. However unlike many receivers coming out of college these days, Odell Beckham Jr. came into the league a pro-ready route runner.

Once Beckham is able to take the field, his route running ability will serve him in good stead in Ben McAdoo's offense. His precision, agility, and ability to sell the route will fit perfectly in the up-tempo offense, and his speed should make him an electric weapon.