The progress of the offense will get intense scrutiny throughout training camp.

The biggest storyline for the New York Giants throughout training camp, and maybe even throughout the entire season, will be the development of the team's re-structured offense under new offensive coordinator Ben McAdoo. Even with an entire offseason to familiarize himself with the new scheme, quarterback Eli Manning admitted Monday that he was "a little nervous" about how it would all work out.

"You come into the season a little nervous. You just don't have ... you have a good feel for it but not to where I want it to be. That just comes with repetition and more plays. It is, it's a different feeling at this time of year than in previous years," Manning said. "Still have a lot of work to do, a lot to improve on to get comfortable myself and get comfortable with my teammates and everything that goes on with being successful in an offense. I know we have a lot of work to do but I'm excited about that challenge." 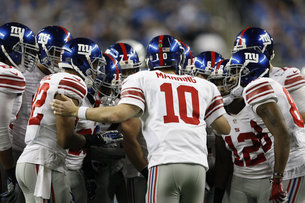 Manning will run an offense that will feature at least three new offensive lineman, a new tight end, a different group of running backs and a wide receiver [Odell Beckham Jr.] drafted in the first round.

"As we got in the OTAs and mini-camps, we started to look and feel like a football team, like an offense that was making plays and had an understanding for what was going on and we clicked a little bit," Manning said. "Hopefully we can get right back onto that to where we finished off in the spring. Come in here and get rolling and get a better feel for everything that is going on."

Where does McAdoo think the offense is heading into camp?

"We're a work in progress. We're not where we need to be identity-wise," McAdoo told Giants.com recently. "We've only had 12 practices vs. a defense, so at this point in time we're laying out the foundation. As we get moving forward the adjustments and things like that will start to show up."

Watching the Giants try to put the pieces of this offense together will be one of the fascinating, and important, stories of 2014. That work begins this afternoon.