Would a third straight season of missing the playoffs put the Giants in the position of having to force Coughlin out of a job he isn't ready to leave?

The New York Giants' locker room will be a crowded place when training camp begins next week. Physically, that is because with 90 players on the roster there are extra rows of temporary lockers occupying the middle of the room, whereas there will be only 53 players there during the regular season.

There is another reason, though, that the room will feel crowded during this training camp. When players report on Monday there will also be several figurative elephants in the room facing the Giants, who have missed the playoffs two seasons running and massively overhauled their roster in a desperate attempt to avoid having that streak reach three.

Question is, why haven't you purchased one already? For only $4.99 you get all the news and features you need to be ready for the upcoming season.

Over the next few days, Big Blue View will examine some of those elephants. Let's start with the biggest elephant in the room for the Giants -- the future of soon-to-be 68-year-old head coach Tom Coughlin.

At the end of the 2013 season, Coughlin made it plain that he was nowhere near ready to call it a career. One of the things he said was "I'm just a young guy in this business."

Coughlin is without a doubt young at heart. He still has energy. He still has passion. The changes in the Giants' offense show that he still has the willingness to learn and to do what has to be done to get the Giants back on track. He still carries the respect of his peers and his players. Coughlin can still coach. Nobody doubts that. In fact, getting the under-manned Giants to seven wins last season after that disastrous 0-6 starts might have been one of the best coaching jobs he has done in New York.

What happens after the 2014 season, though, if Coughlin can't put together the pieces of the complicated jigsaw puzzle GM Jerry Reese has handed to him? More directly, what do the Giants do with Coughlin if they miss the playoffs for a third straight season, the fifth time in six years?

Whether Coughlin would carry blame for that, or whether it should be directed at Reese and Vice President of Player Evaluation Marc Ross, there will be tremendous pressue of CEO John Mara to make a change. To do something, anything different. To replace Coughlin and point the organization in a new direction, whether the guy who is arguably the best coach in franchise history deserves it or not.

We already know Mara is running low on patience. The Giants were never realistically in the playoff race last season, and there were a lot of empty seats at MetLife Stadium the final few weeks of the season. Apathy in the fan base and empty seats on game days will always get an owner's attention. 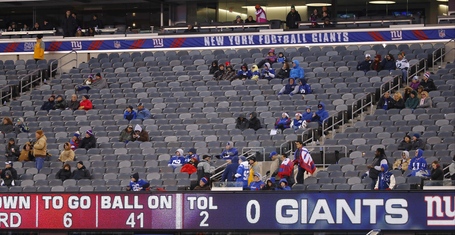 You can bet John Mara does not want to see empty seats like this again in 2014. [Photo by Jim O'Conno r-- USA Today Sports]

Here is part of what Mara said at his 2013 end-of-season press conference:

Obviously the fans are not very happy with us," Mara said. "We were bitterly disappointed with the results this year. Our fans deserve better. ...

"We're going to do what we have to do, but we're going to do it in an intelligent fashion," Mara said. "Stability is important, it's one of the reasons we've had some success here. But, there are times when changes have to be made. When we agree on those changes then we make 'em."

The Giants made a ton of changes to the offensive coaching staff and personnel throughout the roster this offseason. On Thursday, Mara promised that sweeping changes of that sort, and the aggressive approach to free agency the Giants took this offseason, is not something fans should get used to.

Mara: "If you are that aggressive every (offseason) it means there is something wrong with your organization."

So, who does that leave as potential targets should the Giants fall short of making the playoffs once again? Coughlin, members of the front office like Reese, Ross and the scouts who report to them would seem the obvious possibilities.

Purely speaking about Coughlin, the Giants have McAdoo -- a guy who by all accounts is on the fast track to a head-coaching job someday soon -- and they might decide it is time to turn over the reigns to make sure he doesn't get away. Would they fire Coughlin? Almost certainly not. More likely would be a retirement by the league's oldest coach.

The flip side of the equation is that even a good season, defined as a season in which the Giants make the playoffs, does not guarantee that Coughlin will be back to finish his contract in 2015. What it does, in reality, is take the decision out of ownership's hands and puts it in Coughlin's control.

Perhaps a playoff berth, especially if it ends with a deep playoff run, leads Coughlin to think he should go out on a high note. Step away when the organization appears pointed in the right direction, and when analysts won't be able to look at his resume and say "missed the playoffs his last three seasons as head coach."

More likely, a 2014 playoff berth makes everyone comfortable with a Coughlin return in 2015 -- whether for a final season or with a new contract extension that could have him coaching into his 70s. Remember that Coughlin told Ian O'Connor of ESPN Radio that he feels capable of coaching "well beyond" his 70th birthday:

"I certainly do, and I'm blessed with good health and good energy and a routine that I think puts me in the maximum opportunity to stay healthy," Coughlin said before mentioning his wife. "The other issue, of course, is [his wife] Judy. If Judy's healthy, and so on and so forth, and we both feel good about continuing ... then no doubt will we feel that way."

Can The Giants Count On Chris Snee?

The veteran guard played only three games last season. He hopes to play this season, but there are already signs he might not hold up.

Can The Giants Count On Chris Snee?

It is apparent that the Giants do not want to be in the position of having to show Coughlin the door -- and no one can be certain they would want to even if this season does not turn out well. Coughlin has done too much for the Giants, been too good a representative of the franchise, done too much good in the game overall to be treated the way Jerry Jones treated Tom Landry in Dallas.

The desire not to have to make a decision on Coughlin's fate seems, from this vantage point, to be part of the reason the Giants were so uncharacteristically aggressive during the offseason. There is perhaps a realization that some mistakes in personnel have been made. That perhaps some decisions on fading veterans were put off too long. That the organization didn't deal Coughlin a good hand a year ago.

The best-case scenario is that the Giants reach the playoffs, easing the pressure and allowing the organization not to be put in a situation where ownership might feel it has to push Coughlin out when he doesn't want to go. Worst case? The season goes sour and Giants' ownership finds itself in an uncomfortable spot it clearly would prefer not to be in.

So, this is an elephant that isn't going away any time soon.

NEXT: Can the Giants rely on veteran guard Chris Snee?