Justin Pugh was the Giants' first-round pick a year ago. Friday, he chatted with Big Blue View.

"Never," Pugh said. "I can maybe see a mustache, but not a beard. I just can't imagine it. He's very particular in everything he does. With one hair out of place he wouldn't like that too much.

"I'm saying no beard for Coughlin."

"Think about Eli with a beard and tell me that wouldn't be an awful look," Pugh said. "I don't think he could grow one out." 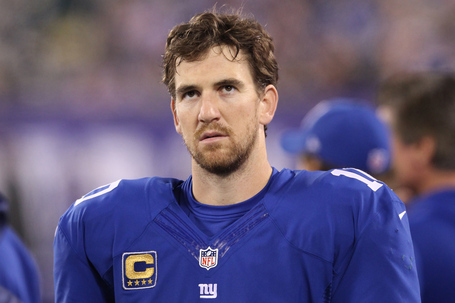 Justin Pugh is not a fan of the bearded look for Eli Manning. [Brad Penner-USA TODAY Sports]

Pugh calls himself the Giants' "beard whisperer." He said he had a mustache as a junior at Syracuse, then went to the beard.

"I always had that baby-face. I wanted to look tougher out there," Pugh said. The eye-black and the beard was always a good combo for me."

"I like to keep it short and clean. I'm not a big fan of the grizzly beard," Pugh said.

Which Giant other than Pugh has the best beard?

"Brandon Myers had a pretty good beard," Pugh said. "Brandon Mosley's got a good beard. He's probably got the next-best beard on the team after me."

New Giants offensive linemen Geoff Schwartz and J.D. Walton sport goatees. Yours truly also rocks the goatee, of course, and Pugh said he's "not a huge fan" of that look. He did add, however, that "gray's in," so there might have to be some re-consideration of the full beard on my part.

Pugh did also talk some football. With Thursday night having been Round 1 of the 2014 NFL Draft we had to discuss his memorable reaction to being selected 19th overall by the Giants.

Pugh, made available to Big Blue View via a promotion for Conair For Men, said he simply remembers how nervous he was as the first round unfolded.

"I just remember sitting there hoping I was the next guy. As o-linemen got drafted my step-dad would cross 'em off. We would cheer every time an offensive lineman was picked. It was one step closer to me getting drafted."