Notre Dame offensive lineman Zack Martin is the choice for the Giants in 76 percent of final mock drafts studied here.

Who will the New York Giants select at No. 12 in the 2014 NFL Draft on Thursday night? Well, the mock draft consensus has formed around Notre Dame offensive lineman Zack Martin, the potential plug-and-play five-position player who has been shooting up draft boards recently. 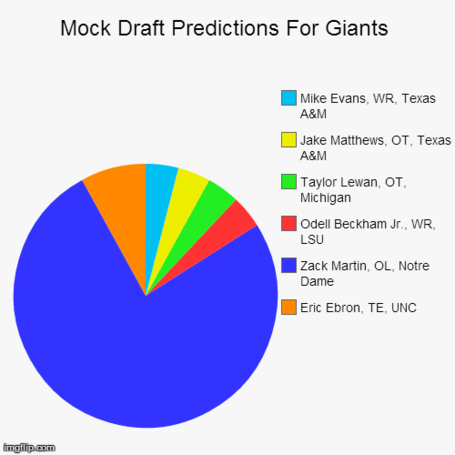 Here is a sample of some of the mock draft used in our roundup. Final mocks from ESPN's Mel Kiper and Todd McShay are not included.

Complete coverage of the 2014 NFL Draft from a Giants perspective. Includes prospect profiles, mock drafts, interviews, film studies, a Big Board and more.

NFL Network guru Mike Mayock, who correctly predicted the Giants' surprising selection of Justin Pugh last year, has Ebron to the Giants at No. 12. Mayock says "Eli needs a buddy. The Giants were No. 28 in points scored, and Ebron is the most gifted tight end I've seen in a while as a vertical threat. If he's willing to work at blocking, he's a Pro Bowl tight end."

Matthew Fairburn and Dan Kadar of SB Nation's Mocking The Draft both chose Martin for the Giants.

Scott Wright of Draft Countdown has Martin going to the Giants, Wright is historically one of the most accurate draft analysts in the business. Wright says Martin ""may be one of the safest prospects in this entire draft at any position. That is why he may not even last this long when all is said and done and I wouldn't be surprised to see teams attempt to trade up to secure his services since he is the last of the top tier of offensive linemen."