With the 113th pick in the 2014 NFL Draft the Giants selected Andre Williams, the big running back from Boston College. But what type of player did they get?

warrior poet
Coined at the end of the movie, "Braveheart", warrior poet describes the most bad ass of the bad asses. The most highly skilled fighters, competitors, warriors, swordsmen, spartans. No one can trump a warrior poet. Nobody trains like them. They do not know defeat and never will. Their heart, intelligence, and determination are unmatched. Their will to triumph, persevere, and over come are the thing of legend.

Off the field Williams is a team captain, teaching assistant, a poet, and an aspiring author.

On the field Williams was Boston College's whole offense. He runs with all the finesse and subtlety of 20 Smart cars getting run over by Big Foot being driven by Hulk Hogan while Metallica plays a concert out of the bed.

However, Jacobs and Bradshaw had the "luxury" of playing on Giants teams that had passing threats. While the Giants generally preferred to use the running game to set up the pass, Eli Manning and the various receiving threats meant that defenses couldn't devote more than seven or eight defenders to defending the run.

For Williams everybody in the stadium knew that if Boston College was going to move the ball, it would be through him. Teams consistently devoted eight or more players to stopping Williams.

So let's take a look at what Andre Williams will bring to the New York Giants.

Rather than take a single game and break it down play by play, I am going to use specific plays to highlight what I want to show. Williams regularly got more than 30 carries per game at Boston College, and breaking all that down would just get tedious for all of us.

These two plays show Williams' bread and butter, running downhill with power. He does a good job of following the play and waiting for his blockers to do their jobs. Williams then breaks the first attempted tackle and powers past the line of scrimmage.

The way he finishes both of these runs is just beautiful. While most running backs will angle to the sideline at the end of a run, Williams turns toward the safety and lowers his shoulder looking to deliver a hit.

Running off tackle isn't Williams' strength. That definitely lies in running downhill, between the tackles. However, provided the defense or the offensive coordinator don't force him to run to the sideline to get the edge, he is capable of running off tackle on occasion.

In this play against Florida State we see the downside to Williams' game. If a defensive player too big to simply run over is able to meet him squarely in the hole, Williams doesn't have the stop/start ability, nor the agility, to bounce the run outside.

Also in this play you see Williams pop upright at contact. Normally he is good about running behind his pads. However, when he is met in the hole like this, he sometimes gets upright and loses his power.

These two plays give a decent sampling of Williams' pass blocking. I'd grade it as "adequate". He is by no means a polished pass blocker, but then Boston College didn't throw the ball enough for him to be polished. He is, however, willing. Instead of giving up ground, he attacks the defender with his cut block. The second one is better, where his block forces the first defensive tackle back into the second (Timmy Jernigan), effectively taking both out of the play.

I couldn't find (and there probably isn't) enough tape to know how he will do picking up blitzes in a sophisticated passing offense, but there is enough to see his willingness.

Williams 'Elated' To Be A Giant 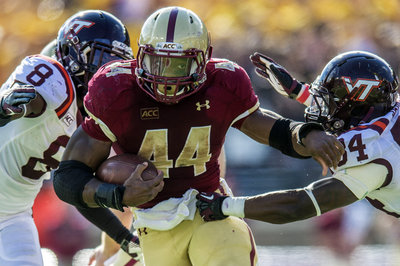 Throughout the NFL Draft Andre Williams was hoping he would end up with the Giants.

There were reports that he caught the ball well at his pro day. However, without seeing it in a game situation, all I can say is that his hands are a mystery.

Andre Williams isn't an exciting, sexy pick. He wasn't one of the more highly rated running backs, and isn't a threat to take it to the house every time he touches the ball. That's not his game. What Williams does is eat carries and pound the football into the teeth of the defense.

He likely won't be a receiving threat, at least not right away, but he looks to be a willing blocker. And as Ahmad Bradshaw showed, if a back is willing, technique can be taught. Williams should also affect the passing game by beating up opposing defensive backs in much the same way Brandon Jacobs used to. At Boston College Williams routinely faced almost absurdly stacked boxes. In New York he enters a system that (while still being formed) will seek to spread defenses out and force smaller players onto the field. Exactly the wrong type of defense to deal with a back like Williams.

The big, bruising Williams might not be the most exciting or electrifying player on the field, but I have a sneaking suspicion that he will become a fan favorite.