It is fitting that when Robert Ayers suits up for the New York Giants this season that he will wear the No. 91 jersey that used to belong to Justin Tuck, now a member of the Oakland Raiders. Ayers, in terms of the skill set he brings to the table, is a perfect fit as the replacement for Tuck, the long-time left defensive end and team captain.

On Sirius XM NFL Radio over the weekend, Ayers said the attraction of following Tuck is one of the reasons playing for the Giants appealed to him:

"Justin Tuck was kind of a guy that I idolized for a lot of my career throughout college and even in the NFL," Ayers said. "I felt like I could play the same way and be that type of guy.

Purely judging by resume, you would say that what the Giants have gotten in Ayers is Justin Tuck Lite. Tuck is a two-time Pro Bowler with three double-digit sack seasons and 60.6 sacks over his nine-year career. Ayers is a five-year veteran who has started only 27 of 72 games and has a total of 12 quarterback sacks in his career.

What the Giants are banking on, though, is that Ayers, 28, is an ascending player who was under-utilized in Denver while Tuck, 31, played as well as he can in a resurgent 2013 and is unlikely to continue to reach that level. 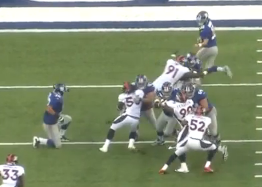 Robert Ayers tackles Brandon Jacobs for a loss
during a game last season at MetLife Stadium.

Pete Damilatis of Pro Football Focus (@PFF_Pete) loves the signing of Ayers by the Giants, particularly as it relates to replacing Tuck:

I'm a big fan of the Robert Ayers signing. He was PFF's 10th-best free agent edge rusher, and a great value this late into free agency.

Despite all of their defensive additions, the Giants were still very shallow at DE. We all know of Jason Pierre-Paul's struggles last season. Damontre Moore is still mostly potential at this point. And Mathias Kiwanuka had our 3rd-worst grade of any 4-3 DE last season.

Ayers didn't play nearly as many snaps as Tuck did last season, but he turned it on once Von Miller went down, showing that he can thrive in a bigger role (which he may have this season given the Giants question marks at DE).

Ayers isn't a particularly disruptive force and isn't going to take over games, but he's a very good run defender, will generate his fair share of pressure, and can hold down the 5-technique and rush from inside in the NASCAR package. I could see him quietly playing a key role this year. This late into the offseason, you couldn't ask for a much better signing.

Those numbers tell you that, other than number of snaps played, there was virtually no difference in on-field performance between the two players last season. The fact that Ayers is a hopefully still ascending player who is $7.25 million cheaper than the descending Tuck over the next two years is another reason the Giants think they might end up profiting from this move.

The Giants, of course, used Tuck in a variety of ways. He played defensive end, lined up inside at tackle in the NASCAR package and sometimes stood up as a linebacker either rushing or dropping into coverage. Watch film of Denver games and you see that Ayers also did all of the those things for the Broncos.

"That's something I was able to do in Denver, something I brought to the team," Ayers said. "I'm able to play most of the positions, whether it was right defensive end, left defensive end, inside guy. I've done a lot of move-around, floating type stuff. I think that's one of the things that the Giants saw that I could do, play a lot of different things. I've played a lot of different positions in my five-year career. I don't know if they're keeping me doing that or if they want me to lock in and solidify one role. I don't know, but whatever it is, I'm looking forward to doing it."

'I was looking for an opportunity to come in and maximize my ability ... the Giants give me a better chance to do that than in Denver.' - Robert Ayers

It would seem logical to think that Ayers will man the left end opposite Jason Pierre-Paul, with Damontre Moore rotating in as the third end. Ayers, a la Tuck, could move inside on passing downs with Moore flanking him on the outside.

"I was looking for an opportunity to come in and maximize my ability," Ayers said. "I feel like the Giants gave me a better opportunity to do that than in Denver. I'm very happy to be here. I'm ready to put Denver in the past and move forward with the Giants. I'm looking forward to it and I'm very excited."

The other thing Ayers, a Jersey City, N.J. native, has to be looking forward to is being able to play home games in front of his family.

"It's going to be good to be able to play closer to family," Ayers said. "The last five years were in Denver, they didn't really get to see me play much other than on T.V. The next few years it'll be good for them to be able to see me play and a good experience for me to have to share this time of my career with them.

"My grandma, most of my aunts, my uncles, most of my cousins are here, and then the ones that aren't in Jersey City, they're kind of scattered around the state. Some are in Pennsylvania, some in New York from my dad and my mom's side. They're all pretty much on the east coast and then there are some in Virginia. Pretty much everyone's on this side of the tri-state area."

There is only one thing Ayers doesn't have. That would be the cool Tuck face mask. 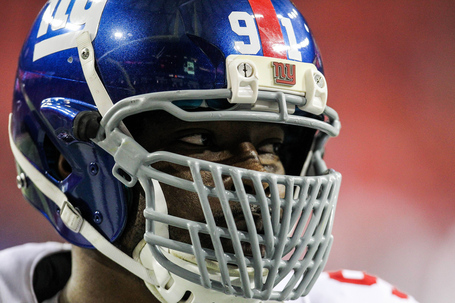 Perhaps he can work on that before the season begins.