Hey Giants fans, hope everyone's doing well. So I was reading the Roster Projections post that Ed put up, and after looking over it I thought to myself that we're still extremely thin along the Defensive Line, especially the Defensive Tackle spot. Now I know how much some of ya'll love Aaron Donald, the 3tech prospect out of Pitt (like I have to describe him), but there is a very real chance that he might not be the pick when the Giants select in the first round. That being said, let me introduce you to DaQuan Jones. 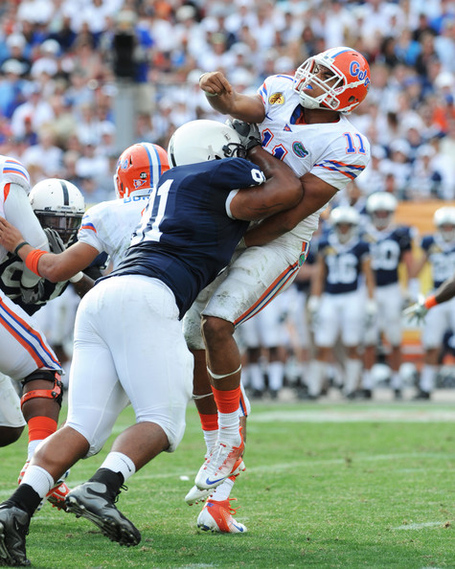 This 6'4, 322 lb man surprisingly may be the answer to finding that pass rushing 3tech Defensive Tackle that some Giants fans have been clamoring for this offseason. Even if you haven't been clamoring for that position, DaQuan Jones is definitely worth a look. Jones offers an excellent first step that lends to his ability as a pass rusher, and possesses the size to not be a liability in the run game the way some 3techs are. He finished the season with 48 tackles, 11.5 of those being TFL's, and three sacks. Also, he's not pigeonholed into being a 3tech either, as Penn State used him in a variety of ways.

Before Dominique Easley went down with an ACL tear, my board for Defensive Tackles was Easley, Jones, and then Aaron Donald. All three possess a similar (explosive) first step that lends to them being incredible interior pass rushers. Lets jump into the film and see why DaQuan Jones impressed a lot of people this year.

Play One: (0:00-0:19) - What a way to start of a film study huh? We see Jones lined up in a 1tech spot here, showing off his versatility. Jones does a good job reading the pull, pursuing from the back side, and tacking down the ball carrier for a TFL. While unblocked, this is still a solid heads up play.

Play Two: (0:20-0:27) - They don't highlight him, so check out the RDE position, which is where Jones is lined up. More versatility at work here. He comes off the edge unblocked, and the play rolls away from him. Nothing much to see here.

Play Five: (0:47-0:58) - Jones is in a 3tech here, and he does a good job of penetrating, except he goes in the wrong gap. The RB finds a running lane up the middle and takes it for a good chunk of yardage.

Play Six: (0:59-1:10) - Another 3tech start here, and Jones doesn't display any pass rush moves to disengage from his blocker. He doesn't get pushed back though, and keeps motoring on, almost pushing back the Guard to where the QB is stepping up. Still, for all this time that the QB gets in the pocket, you expect some type of pass rush move here.

Play Seven: (1:11-1:20) - Jones does an excellent job of getting off his block here, pursuing down the LOS, and making helping his teammate make a tackle on the ball carrier for a minimal gain. This is a good play.

Play Eight: (1:21-1:32) - From a 1tech here, we see Jones get in on sacking the QB. Jones doesn't really do anything special here, but he keeps churning his legs until he breaks free from the blocker, and he helps to take down the QB. Another good play from Jones.

Play Nine: (1:33-1:40) - Check out Jones lining up as the LDE on this play. At this point in the game, he's played all four 4-3 D-Line positions (RDE, 1tech, 3tech, and LDE). If that doesn't speak to his versatility, I don't know what does. On this play, he bites inside a little too hard, but he does a good job of redirecting, allowing him to be in on the tackle near the LOS.

Play Ten: (1:41-1:51) - In my opinion, this is the first overall negative play we see from Jones so far in this film. Jones turns his back away from the play, which means he can't make a play on the ball carrier, or even see him for that matter. Jones has a tendency to either completely turn his back on a play, or more commonly, turn his shoulders away from the LOS. When you're a Defensive Lineman, not having your shoulders squared up with the LOS means you're basically half of a football player. You create running lanes for runners, and this is what allows the QB to take off this play. Here's something that Jones has to correct in his game at the next level.

Play Eleven: (1:52-2:02) - Not highlighted in this play, but it doesn't matter as he gets stonewalled by the interior O-Line here anyway.

Play Twelve: (2:03-2:14) - Notice that PSU is in a 3-4 defense here, and Jones is positioned in a 0tech (Nose Guard/Tackle). We see Jones do an excellent job of sliding off the Center and pressuring the QB. This would have been a sack if Michigan's QB Devin Gardner wasn't so quick and explosive. Start keeping track of how often Jones gets this type of pressure.

Play Fourteen: (2:25-2:35) - Initially, Jones gets pushed back here while playing the 3tech. Somehow he manages to push back and get in on the tackle with his teammates. Not bad, just don't like seeing DT's go backwards.

Play Fifteen: (2:36-2:50) - Another good show of penetration from the 3tech by Jones here. Jones drives his feet, uses his hands to disengages from the Guard, and brings down the ball carrier in the backfield. A strong play against the run here.

Play Sixteen: (2:51-3:00) - Another instance where Jones is standing up at the start of the play. He tries stunting and looping back to the QB, and maybe creates the slightest bit of pressure, but honestly I hate when DC's try to get cute and stand their DT's up.

Play Seventeen: (3:01-3:09) - Standing up once again, Jones finally creates a good bit of pressure from this situation by driving the Guard back. I'm still butting my head against the wall for these standing DT's, but hey, it's not my defense.

Play Eighteen: (3:10-3:29) - Playing the LDE spot here, Jones doesn't get much pressure. The redeeming quality being he kept his eyes in the backfield and knew the QB fumbled, and in turn fell on the loose ball for the recovery. That's what you want from all of your players, solid field awareness.

Play Nineteen: (3:29-3:36) - Jones gets a very nice push here, but chooses the wrong side and doesn't get to make the play on the ball carrier. Still redirected him though, and that counts for something.

Play Twenty: (3:37-3:44) - We see Jones do a good job of shedding blocks here, but he almost turns those shoulders and takes himself out of the play. Instead, he sheds blocks and makes the play at the LOS.

Play Twenty-One: (3:45-3:59) - From the 1tech position, Jones initially blows the Center up, forcing him backwards. He doesn't disengage though, therefore no sack. At least not for him.

Play Twenty-Three: (4:07-4:20) - Jones does an excellent job of breaking through the blockers, both Lineman and blocking back, and creating the pressure. He has to wrap up better to get the sack, but Kudos to Gardner here.

Play Twenty-Four: (4:21-4:30) - No pressure on the QB, but he keeps his eyes on the QB and ends up making the tackle when Gardner takes off.

Play Twenty-Six: (4:41-5:01) - Another excellent job of getting pressure by Jones here, but apparently Gardner is covered in butter or something. How he escapes I have no idea. Still a very good job except for the finish.

Play Twenty-Seven: (5:01-5:12) - From the 0tech, Jones gets another good bit of pressure. Seems to have at least two offensive bodies on him, but still forces what seems like an Intentional Grounding.

Play Twenty-Eight: (5:13-5:25) - Excellent hustle and lateral pursuit from Jones here, as he shuffles down the line and makes a strong play on the ball carrier.

Play Twenty-Nine: (5:26-5:33) - Jones gets strong penetration here, but guesses the wrong gap and gets pushed out of the play.

Play Thirty: (6:01-6:12) - Skipping ahead a few plays, we see Jones positioned at LDE on a huge third and inches play. He does a tremendous job here, beating the pulling Guard to make the play behind the LOS.

After watching this film, along with some others, I can't help but be impressed by this guy. Need a 3tech? Done. A 1tech? Sure. A 0tech? No problem. A Defensive End? Why not? Not only is he versatile, but he's effective at almost every position he lines up at. There are weaknesses in his game, such as the shoulder turn problem and the fact that he sometimes shoots a gap and leaves a running lane, but the positives far outweigh the negatives. For such a large man, he possesses a very quick first step. This allows him to be a great at gap penetration, yet his weight allows him to anchor as a run defender.

Pass Rush: A - Hard not to give him an A here, for such a big guy, he provides a ton of pressure. Work on wrapping up, and that pressure turns into sacks.

Run Stop: B - I think Jones is pretty good at anchoring when he wants to be, but there are times where you see him going backwards. Also, while his penetration lends to some big TFL's, sometimes he goes too far upfield, leaving lanes for the runners.

At the end of the day (hi Antrel Rolle!) DaQuan Jones grades out as a mid second rounder in my book. His ability to be versatile and also offer a pass rush makes me think that he's definitely in the running for the Giants second round pick. Paired with Jonathan Hankins, we could have a very effective pair against both the pass and the run. While I can get on board with some Aaron Donald, he just doesn't come with the versatility that Jones possesses. So what are your thoughts folks?