A freakishly athletic outside linebacker? BBV says: "Sign me up!"

Linebacker Kevin Pierre-Louis is one of the few draftable Boston College Eagles this year, but he's a good one. The need for a linebacker has lessened somewhat for our New York Giants with the addition of Jameel McClain and re-signing of Jon Beason. However, it still remains a need nonetheless, and the draft looks towards the future as it is.

Does Kevin Pierre-Louis have the skill set to be desirable for the Giants? Let's find out.

- Is surprisingly polished at shedding blocks. Didn't think he was, but he impressed me. Not perfect, but there's something there to work with.

- Good, strong tackler. Capable of the big hit as an enforcer despite the slight build.

- Always flowing to the ball. Instincts aren't great, but he is always moving and can track it well.

- Strength is a major question mark. Can get washed out at times, similar to Telvin Smith of Florida State.

- Instincts are questionable at best. Several evaluators, including Nolan Nawrocki of NFL.com, agree with me. Watched a few games and saw some false steps and get tricked by double moves.

- I want to see more explosion off the snap. Sometimes he takes too much time to start moving.

Yes. He reminds me quite a bit of Jacquian Williams, though probably with less length. He isn't quite as raw and avoids blocks better, but they certainly share traits as slimly built coverage linebackers that have some upside as pass rushers. If the Giants don't want to retain Williams, KPL would be a nice replacement. The Giants are always looking for linebackers who can cover.

Shoutout to draftbreakdown for the film. 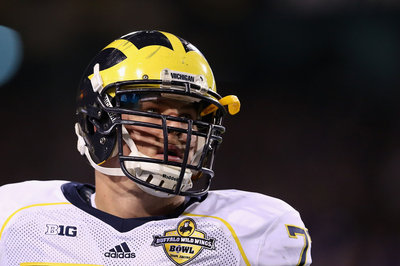 Although Jacquian Williams was a late-sixth round pick, if teams knew what he would become, he'd likely have been considered a late-fourth to early-fifth. That's what I'd say the slightly more pro-ready KPL's draft range might be. My biggest worry for him is the lack of instincts. He's certainly no Lavonte David, but the upside is obviously there. That's likely the biggest difference between him and Telvin Smith. Smith has the requisite instincts and then some. If he develops appropriately, I think he's got starting caliber upside. However, to make the team, he needs to show he can be successful on special teams. Given his athleticism, I don't think that's going to be difficult for him to do.