This has been something of a unique offseason for the New York Giants. The Giants' activity in free agency bears a closer resemblance to the New York Yankees than the Giants we've come to know.

All told, the Giants have either signed or re-signed 23 players this off-season ... So far.

To refresh everyone's memory, those new and returning Giants are: 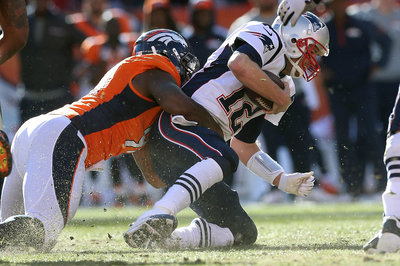 All the news about the free agents the Giants have gained, and lost, since the end of the 2013 season.

Between players signed to one-year contracts and players on multi-year contracts coming to an end, the Giants had a lot of free agents at the end of the 2013 season. However, for a team that prefers to build through the draft and has rarely been big players in free agency, this has been a remarkable offseason.

We still don't know what evaluations were made by the Giants' brass at the end of the season, although we could probably make some inferences based on the moves they have and haven't made in free agency.

What we do know is that the Giants have dramatically altered the makeup of their roster. They have added a number of experienced, but still young, veterans.

The crown jewel of the Giants' free agency haul was in the defensive secondary. The Giants have added cornerbacks Dominiqe Rogers-Cromartie and Walter Thurmond, replacing Terrell Thomas and shuffling Trumaine McBride and Jayron Hosley back in the depth chart.

They have also added safety Quintin Demps, who could take on a prominent role in light of Will Hill's potential troubles.

In addition they re-signed CB Trumaine McBride, who transformed from a journeyman cornerback into a capable starter last season, and S Stevie Brown, who broke out in 2012 to lead the NFL in interceptions. As well the Giants also signed former Bears CB Zack Bowman, who could provide capable depth, and a shot in the arm for special teams along with Demps.

Considering how the Giants' secondary has been battered by injury in previous years, getting reinforcements was necessary. However, where the secondary was good in 2013, the breadth and depth of talent added could help to put them over the top and into greatness.

This is the next area where the Giants have concentrated their free agency resources. Anyone who watched even part of the Giants 2013 season could tell you that they needed an upgrade in the middle of the offensive line. The unit was ravaged by injuries in 2013, with and barely able to field the same lineup two weeks in a row at any point in the season.

Schwartz will likely be the starting left guard, while Chris Snee, Brandon Mosley, James Brewer, and John Jerry will likely vie for the right guard position.

The two question marks going in are related to J.D. Walton's ankle and Will Beatty's leg. Both are coming off injury.

This is an area that isn't getting much press, possibly because the players brought in aren't as exciting as the previous two positions. The Giants brought middle linebacker Jon Beason back on a multi-year deal, while also re-signing Spencer Paysinger and Mark Herzlich.

They also signed outside linebacker Jameel McClain to replace Keith Rivers. And the move that surprised pretty much everyone following the Giants free agency moves: Outside linebacker O'Brien Schofield was offered a contract that was reportedly worth $8 million over two years.

While the deal broke down when a medical report came back with knee issue, everything about the potential signing was out of character. Schofield was the first reported signing by the Giants, who have typically placed more emphasis on the defensive line and secondary. As well, he is a pass-rushing linebacker, and the Giants haven't relied on the blitz.

The rest of the Giants free agent additions have basically maintained the status quo at their positions, either re-signing players or replacing players that left.

Even the signing of Mario Manningham, the wide receiving corps was left with a total of four players, three of whom carry questions.

Likewise on the defensive line Robert Ayers replaced Justin Tuck, but Mathias Kiwanuka faded badly last season, and so far no moves have been made to replace the departed Linval Joseph.

So, how does all that set the Giants up for the 2014 NFL Draft? Well, ultimately the Giants want to be able to add the most talented football players to their roster that they can. Of course, they are limited by their depth chart and the schemes they run.

With their free agency spending spree the Giants have tried, as much as possible, to remove "need" from their calculations with regards to the draft. Giants GM Jerry Reese is generally seen as something of a living avatar of the "Best Player Available" philosophy.

Typically, the Giants do target the best player available, but with the caveat that it is at a position of need unless they're presented with overwhelming value. With the team's moves in free agency, Reese is more free to pursue the "BPA" strategy with regards to the draft.

They have done little with the wide receiver, tight end, and defensive line. This could mean that they are confident in as-yet unproven tight ends Adrien Robinson and Larry Donnell, and defensive linemen DaMontre Moore and Marcus Kuhn. Those could also be positions the Giants are looking to address at some point in the draft.

The wide receiver position, however, is thin and the players that are there bear question marks. The Giants' inactivity with regards to the wide receiver corps could be an indication that they are looking to take advantage of the incredible depth at the position in this year's draft.  As it stands now, there are roughly a dozen wide receivers who could prove to be "first- round talents", or would be in a less-deep draft.

Finally there was the move the Giants tried to make.The O'Brien Schofield almost-signing is interesting because of how out of character it is. The player, the speed at which the deal was (almost) struck, and the size of the deal are all out of character for the Giants. While he could have been a target of opportunity, Schofield -- along with the addition of several aggressive press corners -- could also represent a fundamental shift in the Giants defensive philosophy. With that in mind, it could be that the Giants are looking at blitzing linebackers.

This has certainly been a different offseason for the Giants. We have seen the offensive coaching staff almost completely reshuffled. We have seen fixtures on both sides of the roster leave. And we have seen a tremendous number of new faces and a lot of money spent.

The Giants have worked hard to fill holes in the roster and add talent to already strong positions. That looks to set them up well to draft the most talent players available that fit their team concepts. There are still a couple positions that are thin, but they do match up well to the strengths of the draft.

What will actually happen in the 2014 NFL Draft remains to be seen, but the Giants definitely have a plan in mind to reload the team, fill holes, and then set themselves up for the future through the draft.