Let's add Zane Beadles of the Denver Broncos to the list of free-agent offensive guards the New York Giants might target this offseason.

The fact that the New York Giants will be seeking help at guard on the free-agent market has been well-documented, and we have already touched on many of the players the Giants could look at as possible upgrades at the position. Today, we add one more name to the list -- Zane Beadles of the Denver Broncos.

Beadles, 27, has been a starter for the Broncos ever since they drafted him in the second round (45th overall) in the 2010 NFL Draft. The 6-foot-4, 310-pound Beadles has started 62 of a possible 64 games, and was a Pro Bowl selection for the 2012 season. Beadles is expected to leave the Broncos via free agency.

In analyzing the free-agent guards, Pro Football Rumors says Beadles "should do well on the open market." 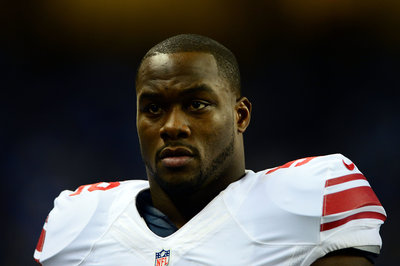 Zane Beadles will be an attractive option to many teams that are struggling on the interior. The Broncos' left guard was drafted highly(second round, 45th overall), started all four years, and made a pro bowl. That's usually the recipe for a lucrative deal, it's just that Beadles will have to improve drastically to live up to such a contract. PFF has never seen Beadles as much more than an adequate run blocker and below average pass blocker. In his pro bowl year of 2012 he was our 17th-ranked guard with a +10.1 grade, but that was his only positively graded effort in his four seasons.

This past season he had the 49th-best Pass Blocking Efficiency among guards (95.5) despite playing in front of the quarterback with the quickest average time to throw in the NFL. In 2011, before Peyton Manning got to Denver, Beadles had the second-worst Pass Blocking Efficiency mark in the league (93.4). Beadles has value in the run game, though, with a +2.9 run blocking grade the past two seasons.

Beadles' PFF grades for his four NFL seasons are as follows:

The numbers over the four-year period make it obvious that Beadles is a better run-blocker than pass-blocker. He also seems to excel in the screen game, where he has graded positively in all four seasons.

If I'm the Giants' decision-makers the idea of bringing in Beadles to protect Eli Manning scares me a bit. The numbers are not impressive (-20.9 pass-blocking for his four seasons). The idea that the Broncos, whose main priority is keeping the aging and immobile Peyton Manning protected, are not showing much interest in retaining him also bothers me, although Mile High Report says Beadles' struggles in 2013 could be pinned on playing in-between a pair of first-time starters on the offensive line.

Your thoughts on Beadles as part of a revamped offensive line, Giants' fans?