Quintin Demps: Much more than a football player

Quintin Demps, one of the newest members of the New York Giants, is more than a football player.

Share All sharing options for: Quintin Demps: Much more than a football player

There is much more to Quintin Demps, one of the newest members of the revamped New York Giants, than being a football player.

Demps, 28, is an aspiring rapper/musician with his own recently-launched record label, Purpose By Faith, the mission of which is "to use ALL Genres of Music(Not Just A Rap Label) as a tool of influence to in turn provide an alternative sound that will change lives and bring Hope to this generation and generations to come."

Check out one of Demps' tunes below:

"We're here to provide music that's positive," Demps told me by phone on Tuesday night. "So much garbage going into our children's ears, we just want to give hope to the generation. Music is very influential and that's one of the tools that I'm using to bring hope to the world."

Demps, who has three children ages 8, 4 and 1, aims to make music, and spreading his positive message, his post-football work. For now, though, the six-year veteran is committed to his NFL career.

"When it's time for football football gets everything. Everything else goes on the back burner," Demps said.

That, of course, means he will be giving everything to the Giants in 2014. He chose to sign with the Giants because "I just felt like it fit where I’m at in my career. I know it’s about winning. I know it’s a fantastic organization. I think it’s a good fit for me and my personality."

Demps, a fourth-round pick of the Philadelphia Eagles in 2008, has also played for the Houston Texans and Kansas City Chiefs. He seems likely to be a backup safety with the Giants as well as potentially sharing kick return duties with Trindon Holliday.

"We haven't really discussed it, but it's the NFL man, you kinda know by now what's going on. This is my seventh year in the league, it's not a secret," Demps said. "I'm just coming in to play my part. I'll play my role and compete to the best of my ability to help us win.

Demps is plenty familiar with one of the new Giants, offensive guard Geoff Schwartz. The two were members of the chiefs a season ago, and Demps thinks Giants' players and fans are going to like the massive 6-foot-6, 340-pound Schwartz.

"He's a hard-working guy. I know he's gonna give 100 percent effort 100 percent of the time," Demps said. "Great teammate in the locker room. He's a good guy, great football player. He'll connect with everybody there."

Demps has been in enough NFL locker rooms that he understands what it takes for a team to come together. Thus, it was natural to ask him about how long it might take for the re-structured Giants to mesh.

"It definitely will take some time, but I think the guys upstairs know what they're doing," Demps said. "They're not rookies at building a team. They know what they need, they know how their season went last year. I feel we're gonna have a pretty good year." 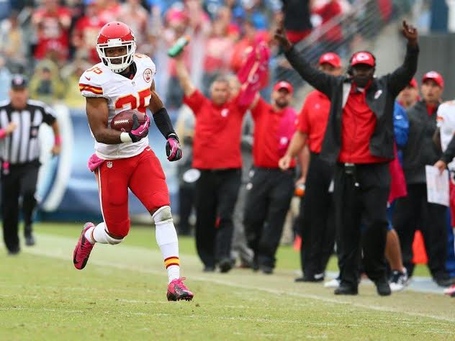 Demps in action for the Chiefs in 2013. [via The PowerHouse Agency]