In the old days of Big Blue View it was "all Ed all the time." These days it's still "a lot of Ed a lot of the time," and yours truly isn't planning on going anywhere. Over time, however, our stable of knowledgeable writers has grown. In the wake of the Dominique Rodgers-Cromartie signing by the New York Giants it is time to take advantage of that stable of writers by introducing a new feature.

We will call it the "BBV Roundtable," and we will use it occasionally to collect opinions from all of our writers on topics of interest to Giants' fans. We begin with a discussion of the Rodgers-Cromartie signing. I am not even going to weigh in here -- there is enough good thought and commentary below that there is no need. 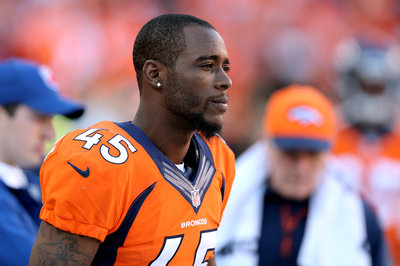 All of our coverage of Dominique Rodgers-Cromartie's decision to join the Giants.

Invictus: "To nab the 6-foot-2, 200-pound sub-4.3 running cornerback from Denver is a coup. He's a mercurial player coming off a great season but I have a theory as to why he vacillates from good to bad years. He needs a veteran presence in the backfield. He had Adrian Wilson and Antrel Rolle in Arizona where he did well for the most part. Then he went to Philadelphia where he was "the guy." He struggled. Moved on to Denver where he went under the tutelage of Champ Bailey and promptly started dominating again. See a pattern? Who does he have on the Giants? Just Antrel Rolle again, the guy he credited with mentoring him when he was drafted.

"The real meaning of this signing means the Giants have a complete secondary for the first time in a long time. Dare I say it might be elite? I can't think of five teams that can best a Trumaine McBride, Prince Amukamara, Dominique Rodgers-Cromartie, Walter Thurmond III, Antrel Rolle, Stevie Brown, and Will Hill cast. You'll see a lot more coverage sacks, for sure. The Giants were sick of allowing QBs to nullify their pass rush with three-step drops. This will certainly help."

Raptor: "I am, quite frankly, elated. The last two years teams have been game planning to neutralize the Giant's pass rush with quick passes. That shouldn't happen any more. Adding DRC to Thurmond and Prince seems to indicate a move to a more aggressive coverage scheme, which should disrupt timing and take away those quick passes.

"There's some risk with DRC (Hill, Thurmond, and Brown), but with Rolle already here to mentor him and help keep him engaged, as well as TC's demanding coaching style, I think they'll get the most out of him. Potential doesn't count for much, but at the moment the Giants should be in the conversation for best secondary in the NFL."

Updated with all of the moves made by the Giants on Monday.

Jesse Bartolis: "The New York Giants signing Dominique Rodgers-Cromartie came out of nowhere as we were led to believe the Giants would have very little cap space to work with. I'd like to thank the "league" or whoever was responsible for bumping up the salary cap last minute for the exciting offseason the Giants have had.

"The signing of DRC is, I believe, a terrific move by the Giants despite the money that is involved. Since the Giants won the Super Bowl in the 2011 season the league has moved towards a quick-strike passing attack against the Giants to exploit a secondary that has been consistently underwhelming, I think the signing of DRC along with the move to secure Walter Thurmond signals an adjustment in the Giants' defensive philosophy that is basically, "we're going to come up, throw off the timing of the receivers and make teams hold the ball for at least three seconds", which is something that didn't happen often recently. Hopefully, this will spark better sack numbers on defense for the Giants, The signing of DRC also opens up the draft for the New York Giants. My draft "target" up to this point has been Justin Gilbert because I thought the Giants were in desperate need of help at cornerback (and a return man, which the addition of Trindon Holliday takes care of) -- an issue they didn't address at all last year in the draft, but now the positions of need for the Giants are not as widespread and the Giants can wait to see which elite player will fall into their laps assuming quarterback-needy teams gobble up quarterbacks in the first 10 picks. Antrel Rolle will also love these signings because for the first time in his Giants tenure he'll be safety even if someone gets hurt. There is a lot of depth and talent in the secondary now.

"Lastly, I just want to take a quick look at the "Doesn't Really Care" label he got from Eagles fans. In 2013 he scored a +13 according to Pro Football Focus which is terrific. In 2012 a "down year" he still was +2.9 in coverage, in 2011 he was -4.5 in coverage, but that was largely due to 2 bad games where he had a combined -7.1 score -- subtract those games and you get a favorable +3.5. The 2010 season was just a flat out bad year. In 2009 he was a whopping +16.8 in coverage. So, yes he's been a little up and down, but the one thing he has done pretty consistently throughout his career is played above average to terrific coverage -- it's the other things like tackling and run defense where he can be less than committed."

Connor Hughes: "I’m a fan of the signing of DRC as he presents a vast improvement for a team that entered 2013 with Corey Webster opposite Amukamara. But while some are quick to proclaim New York the second best secondary in the NFL, keep in mind Rogers-Cromartie was involved in similar hype a few years ago with a certain 'Dream Team.' "