Free-Agency Analysis: What is left for the New York Giants to do?

Share All sharing options for: Free-Agency Analysis: What is left for the New York Giants to do?

The Giants have brought in offensive guard Geoff Schwartz, running back Rashad Jennings and linebacker Jameel McClain, all of whom are expected to start and play key roles. Several players have been re-signed, including middle linebacker Jon Beason, safety Stevie Brown and cornerback Trumaine McBride. There have also been losses, most notably defensive end Justin Tuck and defensive tackle Linval Joseph.

What is left for the Giants to do in free agency? Despite all the work they have already done, quite a bit. Let's take a look at some of the work that remains.

The signing of Schwartz was huge, and not simply because he is a massive 6-foot-6, 340-pound man. Many analysts felt he was the best guard on the market, so the Giants managed to bring in the best player possible to help fill their biggest area of need. A 'Kudos' is deserved for this signing, especially since the four-year, $16.8 million price tag ($6.2 million guaranteed) is not outlandish.

There is still work to be done. The Giants took an intriguing flier by signing center J.D. Walton, but they still need more of a sure thing there. Evan Dietrich-Smith and Brian De La Puente are still on the market, although reading the market right now makes it seem unlikely either ends up in New York. Perhaps the fallback is a short-term deal for Kevin Boothe, and using the 2014 NFL Draft to try and find a long-term solution. Jordan Ranaan of NJ.com is, in fact reporting that the Giants are trying to re-sign Boothe.

the Giants have also been sniffing around young free agents with some upside like Bruce Campbell and Shelley Smith in an effort to build some depth. That will likely continue.

Heading into free agency this was an area where it seemed the Giants, with only unproven Larry Donnell and Adrien Robinson as holdovers at the position, would be active. They kicked the tires on Andrew Quarless, but he returned to the Green Bay Packers. Many other tight ends -- like Brandon Pettigrew of the Detroit Lions and Scott Chandler of the Buffalo Bills -- are already off the market.

Jermichael Finley (Packers), Owen Daniels (Houston Texans) and Ed Dickson (Baltimore Ravens) are out there. Purely for blocking purposes, there is Ben Hartsock of the Carolina Panthers.

I'll applaud whatever team signs Ben Hartsock. +11.7 @PFF run block grade in 2013 was more than twice that of any other TE.

Hartsock, however, will be 34 next season and has only 31 receptions in a 10-year career.

Many around here have been beating the drum for the drafting by the Giants of North Carolina tight end Eric Ebron in the first round this May. The way the market has unfolded and looking at what the Giants have done thus far in free agency, that seems possible. If not Ebron, the Giants drafting a tight end at some point seems viable. 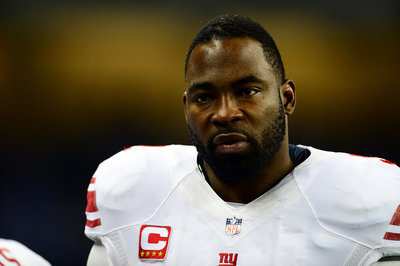 With Hakeem Nicks officially out the door any second now the Giants need to, at least, add some veteran depth here. They have swung and missed at both Jacoby Jones and Ted Ginn Jr., who could not only have added receiving depth but handled kick and punt return duties, as well. Expect them to keep trying.

Look to the draft here as well. One thing we know about GM Jerry Reese is that he loves to draft wide receivers. Given the opportunity somewhere in the first three rounds this May he might well do it again.

The Giants re-signed McBride, but there is plenty of work to be done here. They cut ties with Corey Webster, almost certainly won't bring back Aaron Ross and seem perfectly willing to let Terrell Thomas go if he finds an offer he likes.

The Giants had Tracy Porter in for a visit, but Porter signed with the Washington Redskins.

There are still a ton of cornerbacks on the market. Intriguing options might be Walter Thurmond III (Seattle Seahawks), Tarell Brown (San Francisco 49ers) and Chris Cook (Minnesota Vikings).

There are big-name options like Dominique Rodgers-Cromartie, Antonio Cromartie and Charles Tillman also on the market. DRC, 27, fits the under-30 profile the Giants seem to be looking for. He wants a huge payday, however, having reportedly turned down a six-year, $54 million deal from the Denver Broncos. Hard to see the Giants having that kind of money to spend, or being willing to spend it on a cornerback if they did.

Once again, the draft has to be in play here. Darqueze Dennard of Michigan State and Justin Gilbert of Oklahoma State are players considered possibilities in the top 15 picks. Gilbert could also fill the role of return man.

The losses of Joseph and Tuck leave the Giants needing some depth along the line. Reese has always been good at finding veteran depth along the interior of the defensive line, and you would expect he will do so again. Re-signing Mike Patterson may well be part of the solution. Defensive ends who fit the 'under 30 with some upside' profile include Corey Wootton (Chicago Bears) and Robert Ayers (Denver Broncos).

Scroll through the messages on the @BigBlueView Twitter account, check the Big Blue View Facebook page or read the comments on many of the posts right here and you can sense the impatience, and in some cases downright unhappiness, among the fan base.

Remember, gang, Rome was not built in a day. The Giants have accomplished an awful lot in what is really a time period of less than 72 hours. They have also suffered a couple of losses, and missed on a couple of players they hoped to get. That, though is how free agency works.

The players are FREE. They are free to negotiate with whoever they wish and choose the offer they like the best. Reese cannot simply snap his fingers and say "I want that guy, so he's mine." There are 31 other teams out there, and there is a salary cap to contend with.

There is plenty of time. We are nearing the end of the first wave of free agency. There will be a second wave, and even a third. There will also be the draft. Then there will be more players released this summer in salary-cap moves.

Without doubt, there are holes on the current Giants' roster. Don't think Reese and the Giants don't see them -- they see them and know more about them than you or I do. Reality is, you can't plug every hole that you have. Sometimes you do the best you can and roll the dice that it works out. The fact that there are holes today, though, does not mean those holes will be there in September when it matters.