Jonathan Casillas is the kind of young, under-the-radar free agent Giants' GM Jerry Reese has targeted in past years. Could he be a fit for the perennially linebacker-challenged Giants?

The New York Giants have shopped in the bargain bin for linebackers for, well, seemingly forever. At least as long as Jerry Reese has been general manager, and for the most part during the time Ernie Accorsi was general manager as well.

That has sometimes brought outstanding results, as it did last season when the Giants swapped a seventh-round pick to the Carolina Panthers for the seemingly-washed up Jon Beason. It has also led the Giants to flop with some players like Greg Jones and Phillip Dillard. 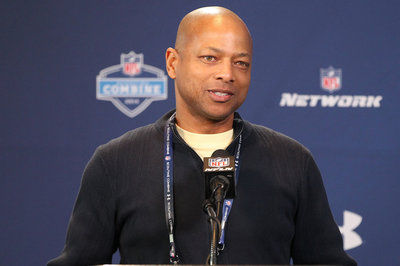 If history holds, the Giants will be spending free agency shopping in the bargain bin again. Maybe for a player like Jonathan Casillas, an outside linebacker who spent last season with the Tampa Bay Buccaneers.

Casillas, 26, is a four-year veteran who spent the first three years of his career with the New Orleans Saints. He played 12 games for Tampa Bay last season, starting four, before ending the season on IR with a knee injury. He had 35 tackles, a forced fumble and a neutral Pro Football Focus score of 0.0 in 199 defensive snaps. Casillas has 12 starts in his four-year career. Tampa Bay would reportedly like to keep Casillas.

Jonathan Casillas is, at minimum, a very, very good special teams player and a solid role-player on defense. Casillas was brought in to compete for the starting job as the strongside linebacker, which was a two-down position for the Bucs last year. He never really managed to separate himself from Dekoda Watson and the two platooned throughout most of the season, but that had as much to do with Watson's strong play as it did with Casillas.

Casillas is athletically very, very good and there are not many things he can't do on the field physically, but he doesn't always play to that ability. He's probably at his best when he can run and chase rather than having to take on blockers, but he won't embarrass you in that role either. He's okay in coverage, but probably better as a blitzer. He's certainly capable of starting in the NFL and has a small chance to be a high-level starter, but he's more likely to be a solid starter who could do with some competition.

The starting strongside (SAM) linebacker for the Giants in 2013 was the barely noticed Keith Rivers, a free agent who seems unlikely to be retained in 2014.

Assuming the Giants re-sign Beason their starting linebackers at the moment might be Beason, Spencer Paysinger (SAM) and Jacquian Williams (WILL). Casillas could be a player who would compete with Paysinger and, at worst, provide help for Giants' coverage teams that were horrific in 2013.

Casillas received a +3.5 special teams grade from PFF in 2013 while leading the Buccaneers with 10 special teams tackles in just 12 games.

I honestly don't know if Casillas is a starting-caliber NFL linebacker. He seems like an upgrade over the Allen Bradford, Marcus Dowtin types who filled the end of the Giants' roster and tried to play special teams last season.