The 2014 NFL Scouting Combine will soon be upon us. Here's a quick primer on what you need to know.

Share All sharing options for: 2014 NFL Scouting Combine: An Introduction

The 2014 NFL Scouting Combine is the last big piece of the puzzle before the NFL draft. Many scouts and GMs will tell you that this doesn't factor in prominently in their evaluations. I think that's a bit of a lie. A bad combine can torpedo a prospect's draft stock. Take a look at Vontaze Burfict and Damontre Moore. Conversely, a good combine can push you from a fringe Day 1 guy into the first round like Dontari Poe.

Whether they like it or not, the Combine will have an effect on how every single participating member will be viewed by NFL front offices. So with that being said, let's prepare.

You can find the entire list of participants, sorted by position, by clicking on this link right here.

You'll find that quite a few of these players have already been featured in our ongoing 'Prospect Profiles' series, with more to come.

There are a myriad of workouts that are going to take place during the Scouting Combine, but probably none more important than the Interview. A simple 15 minutes with a team can tell them more about how you will fit in to that organization's structure than a 4.5 40-yard dash.

Recent New York Giants draft picks Rueben Randle, Justin Pugh, and David Wilson all met with the team at the Combine. That is where Justin Pugh sold the Giants on his versatility. Wilson blew the team away before even saying a word by coming in dressed in a well-tailored suit and tie. Pay attention to the players that the team interviews. There are no smokescreens here.

40-yard dash: Measures straight line speed over a distance. Not very important for non-skill position players, but coming from the 40-yard dash is the "10-yard split." That is the time it takes to travel the first 10 yards of the event and gives a measurement as to the player's explosion and first step. Very important for defensive and offensive linemen. Dontari Poe had a 10-yard split of 1.7 at 330 pounds, which is decent for a linebacker. Bruce Irvin at 235 pounds had a 10-yard split of 1.57, which is a good number for a defensive back. Both help push those players into the middle of the first round.

Vertical and Broad jump: Another measurement of explosion and lower body strength. Also important for wide receivers and defensive backs to show off their leaping ability.

3-cone drill: Essentially a change of direction drill. Most important for skill position players. Shows off lateral agility and ability to accelerate out of a turn. One of the drills that translates best on the field. A good score in the 3 cone is often a marker for a high draft pick.

20/60-yard shuttles: Shows the ability to come to a complete stop and accelerate. Obviously important for any position and a good score here is indicative of explosion and body control. As you can see, explosion is a big factor here and one that the NFL is keen to see.

Position-specific drills: Each position has specific drills that test for many different attributes. Change of direction and hip swing for defensive backs, hands skills for wide receivers during the "gauntlet," kick slide drills for the offensive linemen, power for the defensive linemen in hitting bag drills and accuracy for quarterbacks in throwing drills.

The NFL Combine will be broadcast on NFL Network from Feb. 22-25.

We essentially went over why this is so important, so instead, let's go over 5 prospects I think will benefit the most from this experience, and 5 that might be hurt. 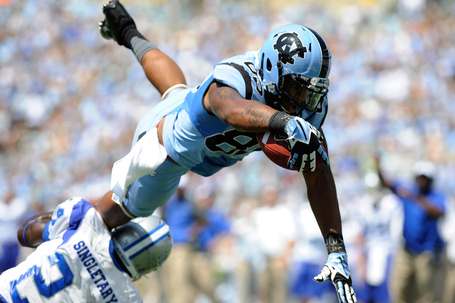 1) Anthony Barr, OLB UCLA - Barr's tape for this past season was not good. His high ranking is fueled mostly by the belief that he is still learning the position (he is, was a running back before converting to LB just two years ago) and that he's an extraordinary athletic specimen. If he runs what people hope he does, he will have confirmed his spot in the first half of the first round.

3) D'Anthony Thomas, RB Oregon - Thomas, otherwise known as "DAT", is one of the shiftiest runners in college football and has made many improvisational plays in his career. However, he is only considered a mid-round pick at this point because of his 5-foot-9, 170 pound frame. If he shows up a bit bulked up and runs a 40 yard dash commensurate to on-field ability, he could push his stock up a full round.

4) Michael Sam, DE Missouri - For Sam, its all about the interviews. As a well spoken individual, I expect that he won't have an issue explaining to NFL teams about his decision to come out and explain that he won't be a locker room disturbance. The way he handles the media attention will be scrutinized as well, and I don't believe he should any issues.

5) Blake Bortles, QB UCF - Bortles is a projected top pick. What makes him so isn't only his arm strength, but also his body type and athleticism. Built like Cam Newton or Ben Roethlisberger at 6-4, 230 pounds, Bortles' workout will be part of his total package. He also has a reportedly affable personality, which is huge when it comes to QBs. For example, I firmly believe that Geno Smith is a better prospect than Sam Bradford, but Bradford went 1st overall while Smith fell to the 2nd round. Why? Part of the reason is that Smith did not come off as a leader of men, while Bradford did. Perception is everything, and I think Bortles will impress in that regard.

See who 'Raptor22) has chosen for the Giants in his most recent two-round mock draft.

1) Eric Ebron, TE UNC - Ebron tops my list for a couple of reasons. There are rumors that he's put on some weight and that could hurt his overall combine performance. It's difficult to put on weight - muscle or fat - and perform soon after because the body needs to adjust. He's projected to have Vernon Davis levels of athleticism, so that needs to come out. What makes his situation different from Clowney or Barr is that those two individuals don't have anyone really close when it comes to their competition, so while a bad combine performance hurts, they'll still be the consensus top guys. Barr is firmly behind Khalil Mack, but after him, the next best pure pass-rushing OLB is likely Kyle Van Noy and there is some distance there. Clowney's nearest competition is Kony Ealy. Eric Ebron is facing competition from Jace Amaro and Austin Sefarian-Jenkins. While Ebron has the lead, by no means is he the consensus. A poor combine could drop him further than most could expect.

2) Will Sutton, DT ASU - Sutton projects as a Linval Joseph type player, a balanced run stuffer that can disrupt the line of scrimmage and is somewhat of a tweener between the 1- and 3-technique. He reportedly showed up at the Senior Bowl out of shape and with less than ideal amounts of body fat. The Combine puts players under a far greater microscope, and given the sheer amount of quality defensive linemen in this year's draft, he could quickly become lost in the shuffle.

3) A.J. McCarron, QB Alabama - As of right now, McCarron is projected to not throw at the Combine. Given his tenuous draft position, that would be a mistake. With a below-average arm, below-average athleticism, only average pocket presence, and really, the only positive being a "leader", McCarron is not a perfect candidate. He won tons of games at Alabama, albeit with Nick Saban and gobs of NFL talent on both sides of the ball to help. However, he came under fire for skipping the Senior Bowl, stating he had nothing to prove. There will be only more questions if he decides to skip the Combine.

4) Jared Abbrederis, WR Wisconsin - This is the type of event that Abbrederis might look like an undrafted free agent. Put on his tape and you see a top 10 playmaker. The issue is that he has no real elite physical characteristics. He is 6-foot-1, 190 pounds and will likely run around the 4.5-4.55 range. Not really standing out. He doesn't have great leaping ability nor is he particularly explosive. He wins because he is quick, runs great routes, sells fakes incredibly well, doesn't allow himself to get pressed and has very soft hands. He reminds me a lot of our very own Victor Cruz, who would've likely dropped because of the combine as well.

5) Lamarcus Joyner, S FSU - The pint-sized safety (no, seriously, he's 5-8, 190) is dangerously undersized for a position that requires you to hit some pretty big people. That in itself will hurt during the weigh-ins when he is seen next to other safety prospects. He isn't particularly fast either, despite being rangy. He is also considered more of a cornerback prospect than a safety. Asking him to move from going forward as a safety to transitioning and turning hips as a corner will be tough to do and he will likely struggle.

So there you have it, my friends. Those are my predictions as to who the Combine will help the most as well as who will be hurt by the experience the most. I can't wait to be proven wrong. As a bonus, 'Raptor22' has provided his list of players that Giants' fans in particular NEED to focus on.

Raptor22's Players to Focus On