Super Bowl Sunday is here. This is your complete guide to watching or listening to the Super Bowl XLVIII matchup between the Denver Broncos and Seattle Seahawks. The game kicks off at 6:25 p.m. EST from MetLife Stadium. It will be televised on FOX.

Super Bowl XLVIII, the first outdoor cold-weather Super Bowl, is set for Sunday with the Seattle Seahawks facing the Denver Broncos at MetLife Stadium. Weather is not expected to be a factor in the game. Temperatures could climb as high as 49 degrees during the day and the thermometer is expected to read in the high 30s with light wind at kickoff time.

No host team has ever played in the Super Bowl. The New York Giants, hosting this season along with their MetLife Stadium co-tenants the New York Jets, hoped to become that team. The Giants, though, started the season 0-6 and were never a factor. The Giants, however, did play both Super Bowl teams at MetLife. They were crushed by the Broncos, 41-23, in Week 2 and whitewashed by the Seahawks, 23-0, in Week 15. For what it's worth the Seahawks have been using the Giants practice facility across the parking lot from MetLife Stadium, and they are impressed by the four shiny Lombardi trophies the Giants own. 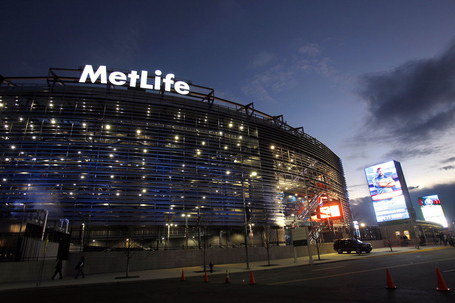 Here is a quick look at the basics for watching or listening to Super Bowl 48:

The Super Bowl and betting, of course, go hand-in-hand. We have a look at 48 prop bets you can make in honor of Super Bowl 48.

Who do you think will win Sunday's game? Big Blue View staffers have already offered their opinions. There is still time to vote in our poll, which right now is leaning heavily in favor of the Broncos.

There is also still time to enjoy the New York Super Bowl experience.