Valentine's Views: State of the Giants -- Fair, with a chance for a sunny future

What is the state of the Giants? Well, here is one opinion.

Share All sharing options for: Valentine's Views: State of the Giants -- Fair, with a chance for a sunny future

Coming off their bye week, it seems like forever since the New York Giants have played a game. Since the Giants lost to the Dallas Cowboys two weeks ago to fall to 3-4 they have been dissected just about every way possible by just about everyone with a platform to do so. At Big Blue View, we have reported on many of those opinions and, of course, offered plenty of our own.

After reading McAdoo's remarks on Friday I thought about focusing here specifically on the offense and my thoughts on what has and has not taken place there. We have been there and done that a number of times over the past week, though, so here is a broader look at the Giants as they begin the second half of the season Monday night against the Indianapolis Colts. Let's look at the Giants as though this was a weather forecast. What are the current conditions, what does the forecast look like for the remainder of 2014 and what does the Big Blue View Farmer's Almanac say about what could be coming down the road? That, actually is sort of appropriate since we set the clocks back Saturday night. You did remember to do that, didn't you? 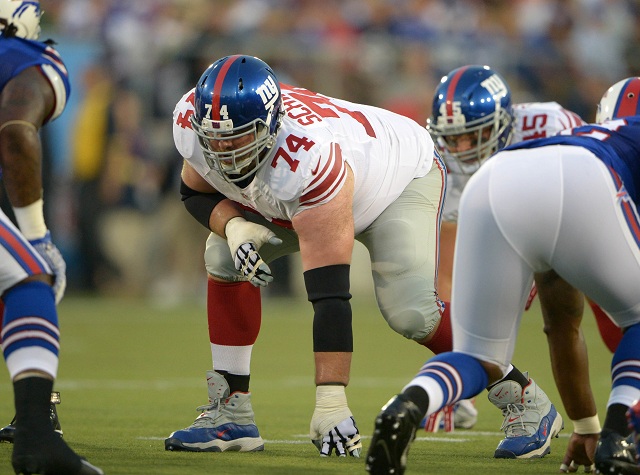 Injuries like the one suffered by Geoff Schwartz mean the Giants have never really had the team they hoped to have this season.

Outside Your Window Right Now

Current conditions with the Giants would seem mostly cloudy. There have been a few breaks of sunshine -- like a three-game winning streak, the splashy mid-season arrival of first-round draft pick Odell Beckham Jr. and the much-improved play of Eli Manning. There have been too few rays of that sunshine, however, leaving the end result for this year's crop of Giants in grave peril.

Giants' offensive coordinator says team doesn't want to force plays that aren't there, but would like more big plays.

There is a mega-storm brewing, as well, with the Giants facing the "Murderer's Row" of the Colts, Seattle Seahawks, San Francisco 49ers and Dallas Cowboys over the next few weeks. To out-run that storm the Giants will have to mature quickly and show they can do what they have not been able to do for the past season-and-a-half -- beat winning teams who are at full strength.

There are a great many unpredictable factors that will determine whether or not the sun shines on the Giants this season and they reach the playoffs. Before we move to that part of the forecast, we need to acknowledge some of those factors.

The reality is, this version of the New York Giants is not whole. Injuries to Victor Cruz, Jon Beason, Walter Thurmond, Trumaine McBride, Geoff Schwartz, Rashad Jennings, Jerrel Jernigan and others is part of that. Truth is, though, from this vantage point the Giants were never whole to begin with. How is that? Let me explain.

In my view, the massive re-structuring of the Giants that began to take place last off-season began a year too late. The Giants, with the Super Bowl at MetLife Stadium and a group of fading veterans who had won in the past, chose largely to keep the old gang together in 2013 for one last run. That decision, as we know, blew up in their faces.

The Giants have had, I believe, two quality drafts in a row. Yet, last season's disaster and the decision not be begin restructuring after the 2012 season, left them with a massive overhaul to do -- 14 free agents in all were brought in. Some of those are working out, some aren't.

Fact is, you can't plug every hole in the dam in one off-season. Offensively, everyone has a theory on why the Giants haven't generated enough big plays. We are all used to seeing them throw the ball down the field more -- and a great many people spent years complaining about that. Now that they are running a safer offense, many are complaining about that. My belief is that the offense remains a work in progress -- both in execution and understanding, as well as in personnel. Even with a healthy Jennings the Giants lack a home run threat at running back. Even with Schwartz healthy, they are probably one mauler short on the offensive line. Even with Cruz, McAdoo's offense is still probably missing a big, physical receiver on the other side.

Defensively, the Giants have also disappointed this season and the injuries to Thurmond, McBride and Beason aren't the only reason. They haven't adequately replaced Will Hill at safety, and it might take an early-round draft pick to do that. They still don't generate enough plays in their front seven. Development by Damontre Moore and Devon Kennard should help there, but they are probably still short a big-time play-maker.

So, this is a roster in progress along with whatever else might be taking place. Another good draft and the right free-agent signings would make a huge difference.

Will the sun shine on the Giants and their fans over the final nine games? [Jim O'Connor -- USA Today Sports]

Will the Giants break through the clouds that hovered over them the first seven games, out-run the storms that are chasing them and find sunshine -- defined as a berth in the playoffs -- awaiting them at the end of the season?

Here is a better question. Does it really matter at this point whether or not the Giants make the playoffs? It certainly would be nice -- every season with the playoffs is better than one without them. After two straight seasons of missing the playoffs it would certainly provide tangible won-loss record evidence that the Giants are pointed in the right direction.

Thing is, this version of the Giants is almost certainly not championship-caliber, despite what some of the players may say they believe, or want you to believe.

Here are some thoughts on things to look for Monday when the Giants face the Colts.

The more appropriate measuring stick is probably whether or not this team shows improvement during the final nine games of the season.

My belief is that the Giants team you see over the final nine games will, for the most part, play better football than the one you saw over the first seven games did. Can they win enough games to make the playoffs? I really don't know. I believe, though, that the team that ends the season will be a better one than the one that began the season, and will be one that is pointed toward a solid future.

The forecast then? Increasing sunshine, though maybe not enough to make this season a success by the 'did they make the playoffs?' measuring stick.

So, what is the long-range forecast for the Giants? If you have slogged your way through the 1,300 words I have already written you probably know where this is going.

I believe the Giants are pointed in the right direction. I think the offensive philosophy is taking root, and that it will continue to expand and improve. I believe there is a solid core of young talent from the last couple of draft classes that should serve the Giants well going forward. That doesn't mean they are all ready now, or that they are as good as they will become. It means that I think the young players the Giants could lead the Giants into an impressive future.

Will Coughlin, the league's oldest coach, be part of that future? The Almanac doesn't answer that question, and neither can I. If the Giants don't make a run to the playoffs, or at least a run that gets them close to the playoffs, perhaps Coughlin decides he has had enough and walks away from the last year of his contract. Perhaps John Mara decides Coughlin, for everything he has done for the Giants, can't right this ship and turns elsewhere.

No matter, to be honest, provided the Giants make a good decision regarding whoever the next coach will be. Whenever they have to make that decision.

As I said above, current atmospheric conditions indicate that this Giants team really isn't that far from being a very, very good one. If the wind blows in the right direction, the Giants have another quality draft, re-sign Jason Pierre-Paul and are able to add a couple of quality free agents you could be looking at a very, very sunny forecast a year from now.