How have the New York Giants defensive ends done thus far with Justin Tuck having moved on to the Oakland Raiders?

Did the New York Giants make the right decision when they let former defensive captain Justin Tuck leave via free agency, refusing to make a realistic counter-offer to the two-year, $10-million deal Tuck got from the Oakland Raiders? The answer, four games into the 2014 season, is an unequivocal 'yes.'

That has nothing to do with Tuck, who can hardly be faulted for the misery of Oakland's 0-4 start. Playing in a 3-4 for the first time in his career, Tuck is continuing to play as a high level. He has compiled a +6.7 Pro Football Focus grade (seventh among 3-4 DEs), has a sack and seven combined hits or hurries. The man can still play.

The Giants made the right decision because the play of the defensive ends they chose to keep has made moving on without Tuck, who had 11 sacks last season and 60.5 in nine seasons with the Giants, has made it the correct decision. In various ways, and to various degrees, Jason Pierre-Paul, Mathias Kiwanuka, Robert Ayers and Damontre Moore have all excelled thus far in 2014. Let's look individually at the play of all four defensive ends thus far.

Pierre-Paul repeatedly promised to be great this season. Yours truly repeatedly said JPP needed to back up his bravado for the Giants defense to be top-notch. So far, Pierre-Paul is walking the walk.

No defensive end plays the run like Pierre-Paul. He leads all defensive ends (4-3 and 3-4) with a +9.0 Pro Football Focus grade vs. the run. No 4-3 defensive end comes close to his 17.3 run stop percentage or his 13 run stops. Pierre-Paul uses power, long arms, chase-down speed and doesn't quit on plays.

"He has double digit tackles in every game. Not even J.J. Watt does that," said Giants radio analyst Carl Banks. "He is dominate at [the] point of attack. He's all over the field."

Pierre-Paul's pass rush numbers are not quite as impressive. He has just 1.5 sacks, a pace that would net him only six for the season. That's a far cry from the 16.5 he had in his All-Pro 2011 season. PFF grades Pierre-Paul's pass rush productivity 26th among 30 4-3 defensive ends who have played at least 50 percent of their team's defensive snaps. PFF says Pierre-Paul has been effective on only nine of 121 pass-rush snaps, just six percent.

Even in 2011 Pierre-Paul was not considered a great pass rusher by PFF standards with a pass-rush productivity score of 8.2 percent, 22nd among defensive ends who played 50 percent or more of their team's snaps. Seven 4-3 defensive ends that season were above 10 percent. This season, six are. Ayers (13.8 percent) leads the league.

Banks, though, says Pierre-Paul will make his mark as a pass rusher before the season is over.

"He is just as explosive," said Banks. "His sacks will come in bunches." 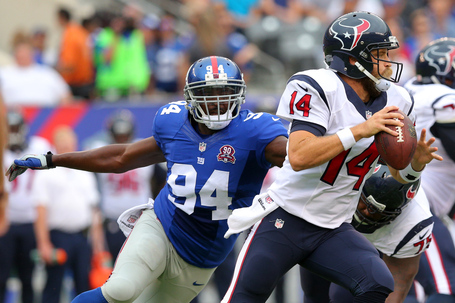 After a 2013 season that saw the veteran Kiwanuka perform poorly (six sacks, a -31.5 grade in 892 snaps) many figured the 31-year-old former first-round pick was on his last NFL legs. Hardly. After a rough season-opening game against the Detroit Lions, Kiwanuka has been terrific. He has 1.5 sacks, 13 pressures and a pass rush productivity score of 8.6 percent (eighth among 4-3 defensive ends).

"Kiwi I think has exceeded expectations considering he was forced to take a major pay cut," Banks said. "I don't believe they thought he could still play at a high level."

So far this season, though, he has done just that. 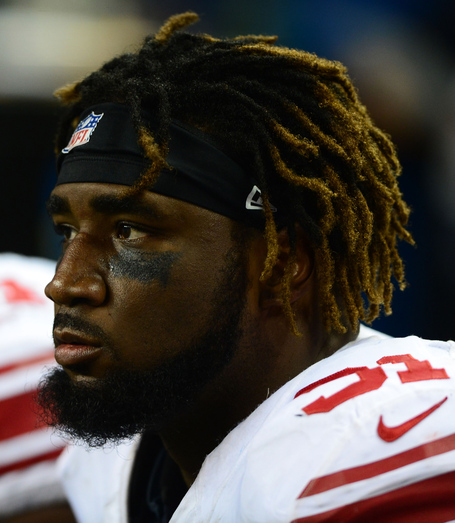 Ayers, ostensibly, was signed as the free agent "replacement" for Tuck. At 29, he is two years younger and $6.25 million cheaper than Tuck, having taken a two-year, $3.75 million contract to sign with the Giants. He has also been every bit as good, albeit while playing fewer snaps thanks to the improvement by Moore and the solid play of Kiwanuka.

Ayers officially has two sacks (PFF gives him three), and 13 pressures in just 76 pass rush snaps, a league-best pass rush productivity percentage of 13.8. His run stop percentage of 14.3 is second only to Pierre-Paul among defensive ends who has played at least 25 percent of their teams snaps. Ayers has played just 35 run snaps. Ayers' overall PFF grade of +9.9 (+6.7 in pass rush, +2.8 in run defense) is second in the NFL.

He has played both ends and, like Tuck used to, rushed the passer from the tackle position in the Giants NASCAR package. He has been everything the Giants hoped for when they signed him away from the Denver Broncos, and probably more.

"Very good/active hands for an inside defender, size to play the run, agility to be a good pass rusher inside and outside." 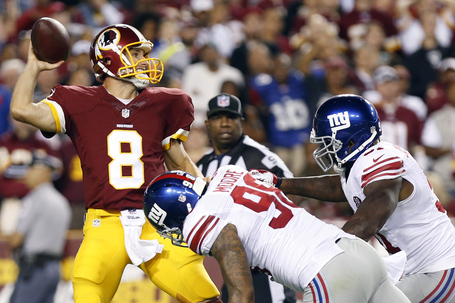 Moore is the wild card. He is like a young stallion who hasn't quite been broken yet. You can, however, see what could be if he can harness the ability he possesses.

Moore has gotten his first NFL sack this season and has seven pressures in 44 pass rush snaps, a pass rush productivity score of 12.5 percent. That puts him sixth among all defensive ends, although he has played less than 25 percent of the Giants defensive snaps.His run stop percentage of 11.1 percent is also sixth, although in only 18 snaps.

Truth is, when Moore has been good he has been very good. He has, however, made his share of youthful mistakes. He lost contain on Matthew Stafford in Week 1 and that led to a 67-yard touchdown pass. His +0.1 grade vs. the run shows that he has been adequate, but not spectacular in limited run snaps.

Banks said Moore has "tremendous upside" and that he "gets better each snap."