Who played well at cornerback for the Giants in 2013? Who did not? We look in our positional review.

We are working our way through positional reviews for the New York Giants, and today we turn our attention to cornerback.

The cornerback position was a mixed bag for the Giants in 2013. There were success stories in the development of Prince Amukamara, the solid comeback of Terrell Thomas and the surprisingly effective play of Trumaine McBride. There were disappointments in the lack of contribution from Corey Webster, the stalled development of Jayron Hosley and the injury to Aaron Ross.

The Giants chose the route of familiarity in constructing their cornerback depth chart for 2013. They brought back Webster and Ross and counted on the return of Thomas. They were bailed out by the surprising play of McBride, but bringing back Webster and Ross when they could have spent that money on a player like Brent Grimes could be considered a mistake. After suffering an achilles injury, Grimes signed a one-year, $5.5-million 'prove it' deal with the Miami Dolphins last offseason. The two-time Pro Bowler wound up as the No. 2 cornerback in the league based on the Pro Football Focus grading system, with a score of +16.4. Grimes had 16 passes defensed, four interceptions and a passer rating against of 66.3.

Which defensive ends played well in 2013? Which did not? What is the future of the position?

Which defensive tackles played well in 2013? Which did not? What is the future of the position?

Prince Amukamara -- He isn't there yet, but in his third season Amukamara finally showed signs of becoming the top-flight corner the Giants hoped they were getting when they drafted him 19th overall in 2011. He finished the season with 85 tackles and 14 passes defensed, but only one interception. He finished the season with a passer rating against of 87.7, which put him 57th among 110 corners who played at least 25 percent of their team's defensive snaps. Amukamara was finally treated like the Giants' No. 1 corner the final two games of the season, trailing Calvin Johnson of the Detroit Lions and Pierre Garcon of the Washington Redskins all over the field. Amukamara still had only the one interception, however, and needs to come up with more difference-making plays to take the next step.

Terrell Thomas -- The most amazing thing is that Thomas, after three surgeries for torn ACLs and two straight missed seasons, made it through the entire season healthy. Considering no cornerback has ever accomplished what Thomas did in 2013, that fact alone made it a successful year. The fact that Thomas played well as the Giants' slot cornerback might be secondary, but it is also pretty amazing. Pro Football Focus was not terribly impressed with Thomas' work, grading him at only +0.4 for the season with a passer rating against of 106.0. Advanced NFL stats is more complementary, ranking Thomas 13th in Win Probability Added and 10th in Expected Points Added Per Game. Thomas' status for next season is up in the air. The 29-year-old is a free agent, and it remains to be seen how much money the Giants -- or anyone -- will risk on his ravaged knee. Contract Status: Unrestricted Free Agent

Trumaine McBride -- Out of football in 2012, the veteran corner signed a reserve/futures contract last January. To everyone's surprise he not only made the team, but the 5-foot-9, 185-pound six-year veteran started 10 games, doubling his career total of starts. He finished with a +6.6 PFF grade, 15 passes defensed, a pair of interceptions and a 57.4 passer rating against. Will the Giants trust that he can do it again, or will they look to upgrade that spot in the draft or free agency? Contract Status: Unrestricted Free Agent

Jayron Hosley -- The 2012 third-round pick was held back by injuries for the second straight season. He appeared in only 11 games, with one start, and given a choice late in the season the Giants clearly preferred McBride over the 5-10, 178-pound Hosley. Can Hosley finally take a step forward and become a full-time contributor in 2014? Contract Status: Entering third year of four-year, $2.637-million dollar contract.

Charles James -- An undrafted free agent out of Charleston Southern the 5-9, 179-pound James earned a spot on the practice squad with an impressive training camp and preseason. He appeared in 12 games, almost exclusively on special teams. Contract Status: Entering second year of two-year, $900,000 deal. 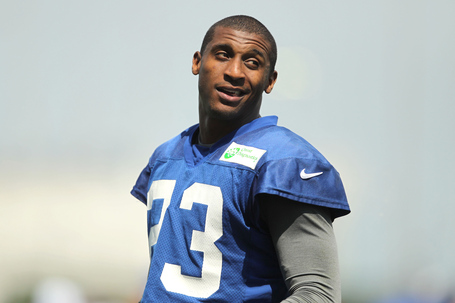 Corey Webster [Photo by The Star-Ledger]

Corey Webster -- Took $4 million of the Giants' money and played all of four games in what might have amounted to a retirement tour for the injured, ineffective 31-year-old corner. No chance he returns to the Giants next season. Contract Status: Unrestricted Free Agent

Aaron Ross -- After one unsuccessful year with the Jacksonville Jaguars, the Giants brought the 2007 first-round pick back to New York hoping he could provide depth. He played in just four games before going on injured reserve with a back injury. It has been a few years since Ross has truly been an effective corner, and if he continues his career in 2014 it seems certain it will have to be elsewhere. Contract Status: Unrestricted Free Agent

Despite McBride's solid play in 2013 and Thomas' comeback, the Giants could use an upgrade here. Other than Amukamara, no cornerback on the current roster is a sure thing to be a 2014 contributor. There are several cornerbacks on the Mocking The Draft Top 100 2014 NFL Draft Prospects list. There are also several corners among the top free agents available.