The defensive tackle spot was a position of strength for the New York Giants in 2013. Will it remain that way in 2014? We begin a series of positional breakdowns with a look at the tackles.

Let's begin a series of positional breakdowns for the New York Giants. For each position we will look at the overall performance of the group, summarize the play of each individual, update the contract status of each player and look ahead to what the Giants might do in free agency or the 2014 NFL Draft.

The Giants went 7-9 in 2013 and missed the playoffs for the second straight year. Here are some suggestions for fixing what went wrong.

Heading into the 2013 season one of the Giants' biggest priorities was to fix a leaky run defense that gave up 4.6 yards per carry in 2012, 28th in the league. Out went Marvin Austin and Rocky Bernard, In came Cullen Jenkins, Mike Patterson, Shaun Rogers and Johnathan Hankins. The result? The Giants improved dramatically, finishing fourth in the NFL against the run by surrendering only 3.8 yards per carry.

The Giants did this while facing almost all of the league's top running backs. The Giants held LeSean Mccoy of the Philadelphia Eagles (once in two games), Adrian Peterson of the Minnesota Vikings, Eddie Lacy of the Green Bay Packers, Alfred Morris of the Washington Redskins (once in two games), Marshawn Lynch of the Seattle Seahawks and Reggie Bush of the Detroit Lions under three yards per carry.

The Giants had a number of problems on both offense and defense during their 7-9 2013 season. Defensive tackle was not one of them. 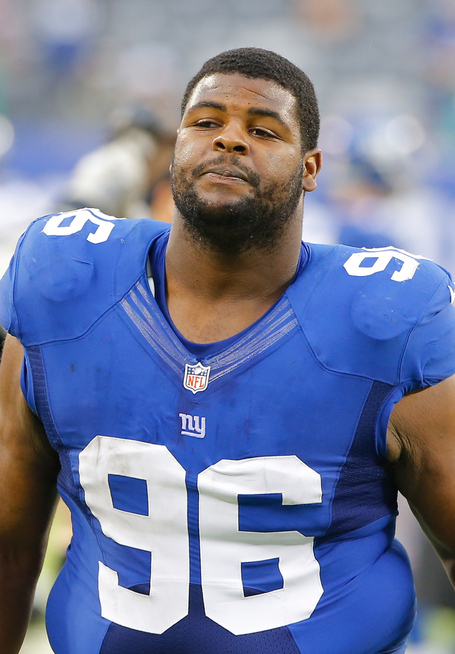 Linval Joseph -- The 25-year-old Joseph had another excellent year for the Giants, with 59 tackles and three sacks. Joseph had a +9.9 grade from Pro Football Focus, including an exceptional +8.0 vs. the run. The Giants face the same situation with Joseph that they faced with Barry Cofield a few seasons ago -- he is a very good player and it would be nice to keep him, but will they be able to afford him. He seems likely to cash in big on the open market. Contract Status: Unrestricted Free Agent

Cullen Jenkins -- Jenkins was the Giants biggest free-agent acquisition prior to the 2013 season, and the veteran defensive tackle came as advertised. He played adequately against the run while providing an excellent inside pass rush with five sacks and 33 hurries, both numbers third on the team. His PFF grade for the year was +6.2, with a +4.6 pass-rush grade accounting for most of it. Contract Status: Entering second year of three-year, $8-million deal ($3.1M guaranteed).

Johnathan Hankins -- The rookie second-round pick was inactive for the Giants' first four games. He played regularly the second half of the season, however, and showed the ability to be a quality defensive tackle. Hankins ended the season with a +8.0 PFF grade, and his +9.5 vs. the run (in only 195 snaps) was third-best on the team. The 6-foot-2, 320-pound Hankins is not an accomplished pass rusher. Hankins, however, should see an expanded role in 2014, whether Joseph returns or not. Contract Status: Entering second year of four-year, $4.03-million deal.

Mike Patterson -- The 30-year-old nine-year veteran was a valuable part of the defensive tackle rotation in his first year with the Giants. He finished the year witha +6.4 PFF grade vs. the run, but no impact as a pass rusher. Patterson could be a low-cost option for the Giants to provide depth once again next season. Contract Status: Unrestricted Free Agent

Shaun Rogers -- After spending the entire 2012 season on IR due to the a blood clot, the 350-pound 13-year veteran showed he could still play the run and push the pocket. At 34, however, he again showed he can't be counted on to stay healthy. He played only seven games before going on IR. His career is likely over. Contract Status: Unrestricted Free Agent

Markus Kuhn -- The second-year player spent the first half of the season on the Physically Unable to Perform list following offseason knee surgery. He played only 10 defensive snaps in 2013. It's hard to look at Kuhn, the smallest of the Giants' defensive tackles, as any more than depth. He will likely have to fight to stay on the roster in 2014. Contract Status: Entering third year of four-year, $2.145-million deal.

Trying to re-sign Joseph will be the free-agent priority. I can't see the Giants, with so many other areas that need attention, using a high draft pick on a defensive tackle. I can, however, see them venturing into the free agent market to add at least one veteran for depth -- especially if they lose Joseph.