Share All sharing options for: Wild-Card Weekend Review: Lessons for the Giants

Wild-Card Weekend in the NFL did not involve the New York Giants, but it was still filled with incredibly entertaining, exciting football to watch. What can the New York Giants learn from the weekend? There were several things I noticed. Here are three of them.

1. Loved the way the Kansas City Chiefs use Dexter McCluster. The Chiefs lined the 5-foot-9, 165-pound McCluster up all over the place, put him in motion and got the ball to him with a series of short, simple, yet creative throws that put him in space. They even handed the ball to him once as a running back. The Green Bay Packers do some of the same things with Randall Cobb. Watching it made me think about Jerrel Jernigan. Whoever becomes Giants' offensive coordinator would be well-served to go to school on that to find ways to get Jernigan, and maybe even Victor Cruz, the ball.

2. Pace works on offense. If you watched the games you saw it all weekend. Almost all of the teams who played used the no-huddle offense to at least some extent. Pace puts pressure on the defense, and when you have a top-flight quarterback who can get you into the right play -- which the Giants do -- not exploitng that advantage is just silly. You don't have to be the Eagles and get every snap off at lightning speed, just get to the line of scrimmage, don't let the defense rest or substitute and go from there.

3. Wide receivers need to make plays. For years fans have killed Eli Manning -- and Kevin Gilbride -- for how often the Giants take deep shots with Manning throwing the ball to players who seemed covered. How often did we see that over the weekend with Nick Foles/DeSean Jackson, Andrew Luck and his receivers, Drew Brees/Jimmy Graham, etc.? Offenses look a whole lot better when receivers make those plays.

Feel free to toss out a few things you saw this weekend, offensively and defensively, that you would like to see from the Giants. Your divisional round playoff schedule is below. 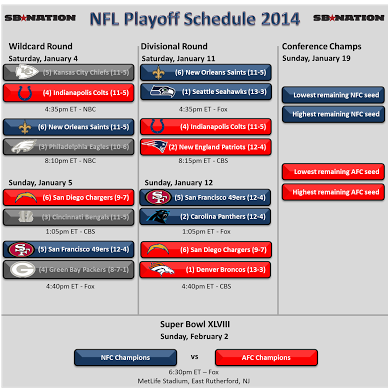